Top Ten Tuesday is an original feature/weekly meme created and hosted by The Broke and the Bookish
Top Ten Books I'd Recommend to Someone Who Doesn't Read: Fantasy
I am leery of this blog thing, but who can resist a list? I am choosing to recommend some of my fantasy favorites because a lot of people try to steer clear of the genre. It is far and away my absolute favorite, and as I've said many times (but probably not here) - if my mother hadn't pushed me when I was younger, it would be the only thing that I would read. Seriously. As it stands, I only allow myself to read one fantasy book for every four or five that I read of other genres. It's not like pulling teeth, but I would escape into the land of magicians and dragons for eternity if I had half the chance. So without further ado, in no particular order (in the first four and last six), my list! 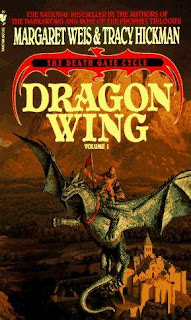 1. Dragon Wing by Margaret Weis & Tracy Hickman
I found this book originally at a garage sale. I read it in one sitting and liked it so much that I read it again. Then I read it another time. Rinse and repeat until my mother pried it out of my hands and told me to go find something else. I think I was nine. I have, by far, reread this book more times than anything else that I own. It has an assassin, elves, magicians, a king, an evil child, dwarfs, and ancient enemies. What's not to love about it? Even better - it's the first book in the Death Gate Cycle, so there are six more books to read after you finish this one.
The book goes between three points of view (if I remember correctly): Hugh the hand, an assassin who is being paid for a nearly impossible job with his life; Limbeck, a Geg who doesn't find centuries of tradition to be a good enough reason to go along with the status quo; and Haplo, a world-traveler in a literal sense - he is traveling between worlds to find any sign of his people's ancient enemy who imprisoned them in a deadly Labyrinth. Each character is so well-developed and the supporting cast is absolutely amazing. Hugh the Hand is one of my all-time favorite literary characters, but I don't want to give anything away.
I recommend this book to anyone that I talk to who loves fantasy. I'm yet to have anyone come back and tell me that they didn't enjoy it. I also feel that I should add that when I watched the opening scene thingy of Skyrim with Bookboy (my wonderful assistant at the library I manage), I immediately thought of this book. I told him that he had to read this book. I will probably have to buy it for him, since I can't find any of the 5+ copies that I've bought over the years. My mom probably has them. 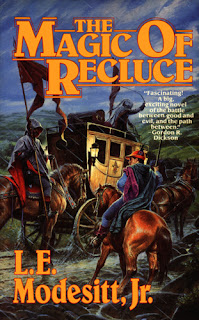 2. The Magic of Recluce by L.E. Modesitt, Jr.
Before I had my daughter, I worked in a large chain bookstore. Since the blogosphere wasn't the huge beast that it is now, and I didn't know about Goodreads, I was constantly looking for something to read. One of the tweens that came in to play Pokemon on Saturdays recommended this book to me. (Don't look at me like that - geeks know their business.) The only thing I ever regretted about this buying this book is that I now own every book in this series.
It is the typical story of good vs. evil, or Order vs. Chaos in this series. The protagonist, Lerris, lives in Recluce with his family. Since he has shown dissatisfaction with life there, he is given the option of either exile or taking on a quest. He is trained and dropped off on the continent of Candar to do his thing. (I don't want to give away spoilers.) It is a wonderful example of the hero's journey, as many epic fantasies are.
Instead of putting more Recluce books on my list, I'll just tell you about the series in general. It is fantastic in that it doesn't focus on the same old character. We don't have to watch the idiot hero get in trouble over and over again like some series like to do. The Saga of Recluce jumps around to different periods in the world's history. Towers of the Sunset is the second book in the series, but is set 900 years in the past. Some of the books are even told from the "evil" chaosmaster's point of view. Fun, right? 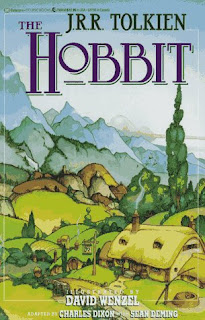 3. The Hobbit: or There and Back Again by J.R.R. Tolkien
J.R.R. Tolkien's own description for the original edition: If you care for journeys there and back, out of the comfortable Western world, over the edge of the Wild, and home again, and can take an interest in a humble hero (blessed with a little wisdom and a little courage and considerable good luck), here is a record of such a journey and such a traveler. The period is the ancient time between the age of Faerie and the dominion of men, when the famous forest of Mirkwood was still standing, and the mountains were full of danger. In following the path of this humble adventurer, you will learn by the way (as he did) - if you do not already know all about these things - much about trolls, goblins, dwarves, and elves, and get some glimpses into the history and politics of a neglected but important period.
For Mr. Bilbo Baggins visited various notable persons; conversed with the dragon, Smaug the Magnificent; and was present, rather unwillingly, at the Battle of the Five Armies. This is all the more remarkable, since he was a hobbit. Hobbits have hitherto been passed over in history and legend, perhaps because they as a rule preferred comfort to excitement. But this account, based on his personal memoirs, of the one exciting year in the otherwise quiet life of Mr. Baggins will give you a fair idea of the estimable people now (it is said) becoming rather rare. They do not like noise.
Now that we got all of that out of the way, we can get to why I chose this work as a "must read". Firstly, it is not as epic as The Lord of the Rings. I can completely understand why non-fantasy folk would shy away from it. The Hobbit is lighter, funny, and a nice starting place for newbies. Secondly, and most important to me, is that this book is why I am a reader. When I was a very small child, my mother pulled her copy down from the bookshelf and read me a few chapters. I was completely entranced by Middle Earth. If I remember correctly, she read up to the point where the dwarves got tangled up with the trolls. The next night, I asked my mother to keep reading. She told me no. She said that it was a book that I should read and enjoy by myself. I was horrified, as I was probably only at Dick & Jane level. Needless to say, I started reading voraciously so I could become a good enough reader to fully appreciate The Hobbit. I could have read it in middle school (or junior high, whatever), but I knew a boy who was really picked on for doing a book report on it. I seriously regret allowing others' closed minds to affect what I chose to read. I can honestly say that was the only time I recall that happening. Back to the point, I read it when I was fifteen, and it was amazing. I breezed through the rest of Tolkien's work. I think the most important part of this story was the inspiration it gave me to read. 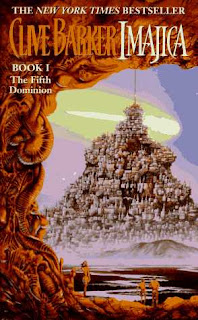 4. Imajica by Clive Barker
This is an insanely immense book. It is broken into two volumes, and it is not an easy read. It is, however, one of the most imaginative, beautiful, and horrifying novels that I have ever read in my life. Clive Barker is able to create things in this world that I cannot even picture in my head. I can usually follow an author's thought process and understand how s/he invented a particular element of the story. That is not the case for Imajica. It is completely unlike anything that I read before or have read since. Hell, I don't think I can even break it down for you. I suggest you Google the book, buy it, and read it immediately. It is so beyond worth it.
~*~Those four were the most important to forming me as a reader, so the rest will just be the list.~*~ 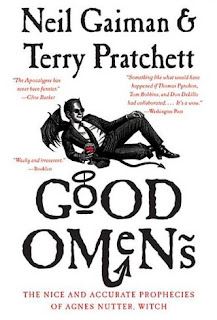 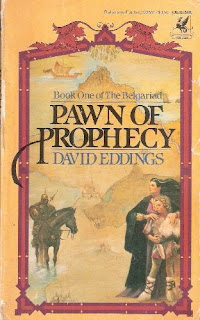 6. Pawn of Prophecy by David Eddings 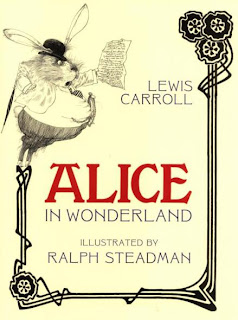 7. Alice in Wonderland by Lewis Carroll 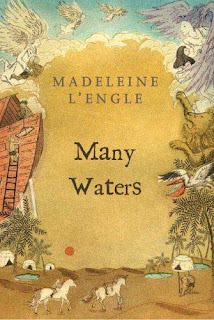 8. Many Waters by Madeleine L'Engle 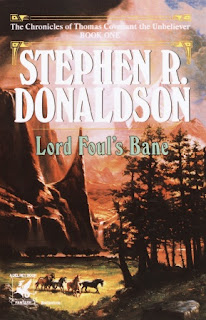 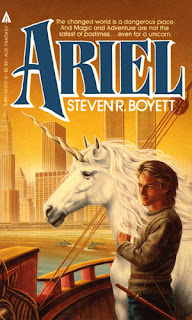 10. Ariel by Steven R. Boyett
So, there you have my list. I know that a few are hardcore epic fantasies, but they are so much more than their genre. I think reading any of these would open someone's heart to Fantasy.
Labels: Fantasy, top ten tuesday
Email ThisBlogThis!Share to TwitterShare to FacebookShare to Pinterest