Review: Forget Me Not by Stacey Nash 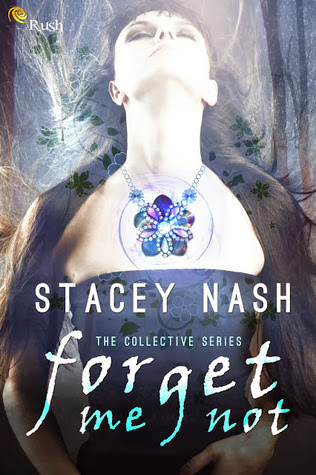 Since her mother vanished nine years ago, Anamae and her father have shared a quiet life. But when Anamae discovers a brooch identical to her mother's favorite pendant, she unknowingly invites a slew of trouble into their world. When the brooch and the pendant are worn together they're no longer pretty pieces of jewelry -- they're part of a highly developed technology capable of cloaking the human form. Triggering the jewelry's power attracts the attention of a secret society determined to confiscate the device -- and silence everyone who is aware of its existence. Anamae knows too much, and now she's Enemy Number One.

She's forced to leave her father behind when she's taken in by a group determined to keep her safe. Here Anamae searches for answers about this hidden world. With her father kidnapped and her own life on the line, Anamae must decide if saving her dad is worth risking her new friends’ lives. No matter what she does, somebody is going to get hurt.

Fiction is Fact. Know the Truth.

It took me some time to actually get into the story of Forget Me Not. The writing was decent, but there were a lot of problems. There were inconsistencies and a lot of unasked and unanswered questions. Also, while there weren’t pacing issues as far as the plot goes, there was a sort of pacing issue in the writing. It kept jumping around all over the place, with Mae asking questions that seemingly had already been answered or Mae discussing things that I, as a reader, had no idea what she was talking about. The writing was erratic and just didn’t flow.

The world building was lacking. I had so many questions that mostly went unanswered. Why did they let this valuable technology sit in a junk store? And why would someone who knew about the valuable technology and the lengths that the Collectors were willing to go to retrieve it, sell the technology in said junk store. Why didn’t Mae ask more questions? Who were the Collectors? How was the tech created? What all tech was there? Why did it need to be controlled? etc.

I think I mostly didn’t connect with the story because I really didn’t like Mae’s character. She was selfish, immature, headstrong and rushed into situations without knowledge, abilities, common sense or experience. The entire time that Mae and Will were with the resistance, she only cared about first, getting back to her father, then later, finding her father. She barely cared that Will’s family and her family friends were also in danger. She also didn’t care that her actions to be released from the safe house and, later, to save her father could endanger anyone at the safe house, anyone in the resistance and (if the Collectors were that bad) anyone in the world.

There was also a love triangle and insta-love. Mostly the love triangle was just annoying because there was no connection between Mae and Will, but Will kept throwing tantrums because he didn’t like Mae and Jax’s relationship. Jax was one of those brooding bad boys who is pretty much an ass to Mae the entire time, yet she falls in love with him anyway.

I know it sounds like I hated Forget Me Not, but I didn’t. I just didn’t love it either. I loved the premise and the story had so much more potential. I really wanted to know more about the Collective and the reasons for protecting the tech. I also wanted to know more about all of the side characters. Lilly, Marcus and the other secondary characters seemed really interesting and I would love to have them fleshed out more in the later books.

Buy it on Amazon!

To satisfy FTC guidelines, I am disclosing that I received an advance copy of the book from the author in exchange for an honest review.