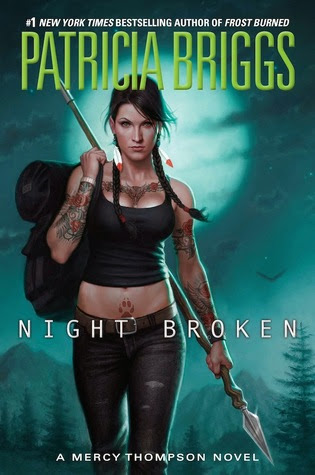 #1 New York Times bestselling author Patricia Briggs’s Mercy Thompson series has been hailed as “one of the best” (Fiction Vixen). Now, Mercy must deal with an unwanted guest—one that brings a threat unlike anything she’s ever known.

An unexpected phone call heralds a new challenge for Mercy. Her mate Adam’s ex-wife is in trouble, on the run from her new boyfriend. Adam isn’t the kind of man to turn away a person in need—and Mercy knows it. But with Christy holed up in Adam’s house, Mercy can’t shake the feeling that something about the situation isn’t right.

Soon, her suspicions are confirmed when she learns that Christy has the farthest thing from good intentions. She wants Adam back and she’s willing to do whatever it takes to make it happen, including turning Adam’s pack against Mercy.

Mercy isn’t about to step down without a fight, but there’s a more dangerous threat circling. Christy’s ex is more than a bad man—in fact, he may not be human at all. As the bodies start piling up, Mercy must put her personal troubles aside to face a creature with the power to tear her whole world apart.

This is another great addition to the Mercy Thompson series! I forgot how much I adore this series. Or maybe I just forgot all the reasons I love the series. When I started reading, it was like when meeting an old favorite friend I hadn't seen in years.

Mercy is one of my favorite urban fantasy heroines. She can kick ass and be alpha when she needs to, but she also has brains and a heart. She tries to do the best thing for everyone concerned, even if it is the harder thing. And she doesn’t run into situations with guns blazing without thinking things through. Although she does seem to have a higher than normal propensity for bad luck.

Not only is Mercy a great female lead, the rest of the supporting characters are just as great. And a lot of the gang is back in this book. Samuel and Ariana, Stephan, Tad, Tony and Coyote all have parts. One of my favorite things about this series is the pack dynamic. I love how Adam acts as Alpha, and the way the pack interacts with Adam and Mercy. I also like that not everyone in the pack completely accepts Mercy. However, I think after the ending in this book, the pack may have even more trouble with Mercy.

The parts with Christy weren’t nearly as annoying as they could have been. Briggs allowed Mercy to take the higher road instead of becoming a petty person. I honestly don’t know if I would have been as adult, compassionate and patient as Mercy was. There were times that I just wanted Mercy to pounce on Christy just to show Christy who Adam’s mate really was.

I was kind of confused about the parts concerning the new wolf. I'm assuming he's going to have some big part in a future book, because he just kind of got introduced and had a few parts but didn't really have a story or clear purpose for being in the book.

I’m glad we were able to learn more about Coyote in this book. I really enjoy the myths and lore that Briggs introduces into the books, especially those concerning Native Americans and the fae. I also liked that Briggs brought more lore into this book - some myths from the Canary Islands.

Once I picked this book up, I could hardly put it down. Some parts toward the ending even had me tearing up. My only complaint in this book was the extremely abrupt ending. I re-read the last page and checked to make sure I was really on the last page whenever I finished. It seemed like the book stopped while it was still in the middle of the story and left some loose ends (which I’m sure are just setting us up for the next book in the series).

Overall, this is a great addition to this already fantastic series. I would recommend the series to anyone who enjoys urban fantasy, especially about werewolves.

To satisfy FTC guidelines, I am disclosing that I received an advance copy of the book from the publisher via First to Read in exchange for an honest review.