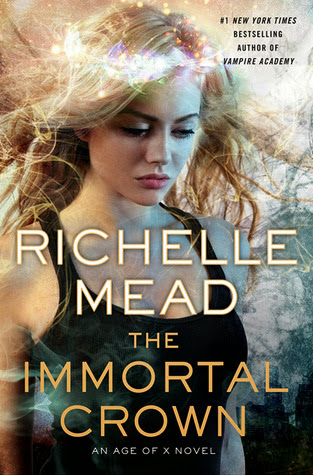 Gameboard of the Gods introduced religious investigator Justin March and Mae Koskinen, the beautiful supersoldier assigned to protect him. Together they have been charged with investigating reports of the supernatural and the return of the gods, both inside the Republic of United North America and out. With this highly classified knowledge comes a shocking revelation: Not only are the gods vying for human control, but the elect—special humans marked by the divine—are turning against one another in bloody fashion.

Their mission takes a new twist when they are assigned to a diplomatic delegation headed by Lucian Darling, Justin’s old friend and rival, going into Arcadia, the RUNA’s dangerous neighboring country. Here, in a society where women are commodities and religion is intertwined with government, Justin discovers powerful forces at work, even as he struggles to come to terms with his own reluctantly acquired deity.

Meanwhile, Mae—grudgingly posing as Justin’s concubine—has a secret mission of her own: finding the illegitimate niece her family smuggled away years ago. But with Justin and Mae resisting the resurgence of the gods in Arcadia, a reporter’s connection with someone close to Justin back home threatens to expose their mission—and with it the divine forces the government is determined to keep secret.

I requested Immortal Crown because I really liked Gameboard of the Gods and I love Mead’s Vampire Academy series and its spinoff series Bloodlines. It’s kind of hard to set out my feeling for The Immortal Crown. I didn’t love it but I didn’t hate it either. It was very slow in the beginning and there were a lot of issues throughout the story.

First, I still really like the overall premise of the story - that there are gods running around the world looking for chosen people to build their fan base and do their dirty work. That premise kind feels a lot like Neil Gaiman’s American Gods, which was an amazing book. But some of the execution is off. For a country that suppresses religion, there surely are a lot of gods running around the RUNA.

I really liked Mae and Justin in the first book, but less so in this second book. I still like Justin because he’s a flawed, selfish character who underneath that has a caring heart and is trying to cope with the god who is attempting to rule him. Mae is a harder character to like, mostly because she has so many walls and comes off as a flat character. I like when we get to see her vulnerability and confusion. She reminds me a lot of Sydney in the Bloodlines series. But I adore Sydney and am just kind of blah about Mae.

I also hated that Mae and Justin kept so many secrets from each other. I understand that religion could get them in trouble, but I think they needed to trust each other more. A lot of things could have been avoided if they would have just told each other some key information. Also, Mae did a few of those things I hate - she was in trouble and refused to ask Justin for help. And she did some pretty too-stupid-to-die or too stupid to get caught in another country and almost die things.

Another thing that bothered me was the portrayal of Arcadia. Apparently at some point in the future the Southeast United States becomes a separate country which basically reverts to a crazy religious country. I live in the Southeast, and while I do believe it is a believable scenario that the Southeast becomes a different country, I don’t think the religion was correct. The religion would not be a polygamist society. It would be heavily Christian. But I could see the Southeast reverting and taking away women’s rights and being discriminatory against other races. I know this is fiction, but it still bothered me. Possibly Mead didn’t want to offend any actual religion so she made up one to use for the Southeast, but then she should have used a different section of the country that isn’t so heavily entrenched with Christian beliefs.

The story did pick up once Justin and Mae get to Arcadia though, and I was able to figure out where the arc of the story was going. Before that, the story was kind of all over the place and I had to read the synopsis to figure it out.

I did love all of the mythology, and I wish that we learned more about the actual gods and myths. It’s understandable that we only learn the overview of some of the gods as RUNA doesn’t really have a whole lot of information about some of the gods.

I was a little disappointed and think that this suffered from second book syndrome. I’ll be reading the third one because I still think the series has potential, and I trust in Mead’s ability to write a good series.

To satisfy FTC guidelines, I am disclosing that I received an advance copy of the book from the publisher via Edelweiss in exchange for an honest review.