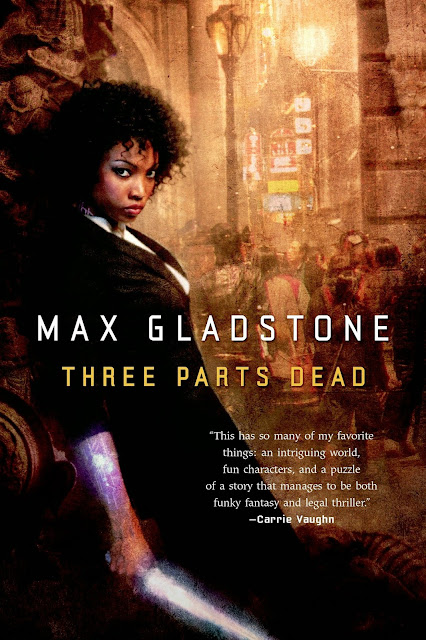 A god has died, and it’s up to Tara, first-year associate in the international necromantic firm of Kelethres, Albrecht, and Ao, to bring Him back to life before His city falls apart.

Her client is Kos, recently deceased fire god of the city of Alt Coulumb. Without Him, the metropolis’s steam generators will shut down, its trains will cease running, and its four million citizens will riot.

Tara’s job: resurrect Kos before chaos sets in. Her only help: Abelard, a chain-smoking priest of the dead god, who’s having an understandable crisis of faith.

When Tara and Abelard discover that Kos was murdered, they have to make a case in Alt Coulumb’s courts—and their quest for the truth endangers their partnership, their lives, and Alt Coulumb’s slim hope of survival.

Set in a phenomenally built world in which justice is a collective force bestowed on a few, craftsmen fly on lightning bolts, and gargoyles can rule cities, Three Parts Dead introduces readers to an ethical landscape in which the line between right and wrong blurs.

I've had a really good run of fantasy lately, and Three Parts Dead is no exception. I wasn't really sure if I'd like it at first, because normally necromancy isn't something I enjoy, but the story is less necromancy than the blurb implies. I picked up Three Parts Dead because Patrick Rothfuss wrote a glowing review, and we need more diversity in writing anyway, so I was ecstatic that the main character was a black girl.

The world of Three Parts Dead was fantastic. It's slightly steampunk, but more traditional fantasy too. I really don't know which subgenre of fantasy it is, but all you need to know is that it's really good. In this world, gods are traditionally worshipped and kept "alive", but they are also sustained by intricate contracts, which give and take essence/magic/souls. When something goes horribly wrong with Kos, the fire god of Alt Coulumb, Tara and her boss are sent in to resurrect him before chaos reigns.

The start was at once both a little slow and a little too fast. There's all kinds of events happening, but not much information being given to the reader, which makes the beginning a little confusing. The reader gradually gets most of the information needed, but it did make the second half much more enjoyable than the first half. The action, by the way, does not really stop all the way through the novel. There are a few lulls, but mostly it's running around trying to save the city, or possibly the world, or possibly each individual is just trying to save him or herself. I just love all the moral ambiguity.

The intricate contracts and the way the world's inhabitants interact made this one of the cleverest fantasies I've ever read. Also, there are all kinds of shades of grey through Three Parts Dead and no one is really a good guy, although there is a clear cut villain or two. Just as an example, one of the gods is "Justice", but she is more vengeful and jealous than the true blind justice. Even with all of the action, Gladstone set one hell of a plot. There were twists and quite a few of the end points that I didn't see coming.

I've read that the second one, Two Serpents Rise is even better than the first, so I can't wait to read it. I'm going to try it in audio this time around. I'm not too sure if I'll like the change of main character, and I hope that we get to see some of the mains from Three Parts Dead, especially the pirate vampire, the addicted pseudo-cop Cat, and the morally ambiguous Ms. Kevarian.