Review: The Wicked + The Divine by Kieron Gillen 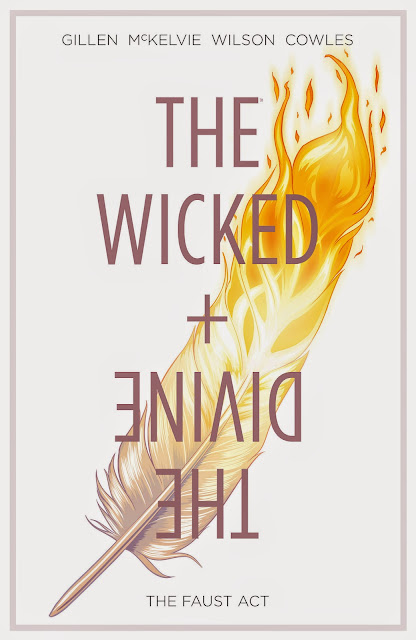 Every ninety years, twelve gods incarnate as humans. They are loved. They are hated. In two years, they are dead. The team behind critical tongue-attractors like Young Avengers and PHONOGRAM reunite to create a world where gods are the ultimate pop stars and pop stars are the ultimate gods. But remember: just because you’re immortal, doesn’t mean you’re going to live forever.

The Wicked + The Divine was everything I wanted in a graphic novel. The art is gorgeous, and the writing has just the right amount of snark for me. The Wicked + The Divine, Vol. 1: The Faust Act combines the first five issues into one collection. The second arc will begin with issue 6 which will be published on December 17, 2014.

I don't want to use any more of those used, abused and clichéd words, but the art was just divine. :) I seriously hope that one day we can order prints of some of the artwork, because I would frame it and hang it on my walls. It's so bright and precise.

Now for the actual plot. It's the first arc of the story so there are a lot of loose ends, and a bit of cliffhanger, but I was expecting it. The general premise is that there are gods that come to earth every 90 years, but only get 2 years before they perish. So, they naturally create havoc and chaos while they are here. But the havoc is under some general rules, which haven't been explained yet, and they do have a sort of overseer to keep them in check to make sure there isn't too much havoc wreaked upon our poor human race.

I wasn't really a fan of the main human girl. She was a little too rebellious, no-one-understands-me for my taste. But, her relationship with Lucifer is interesting.

The Wicked + The Divine contained some of the best comic writing. I was bookmarking something every few pages, and while the comic was 180 pages on my tablet, I read it in less than 2 hours. It's that good and that hard to put down. The writing is clever and sarcastic, and the storyline has a bit of a mystery to keep things interesting and not completely irreverent and frivolous.

I want to read Angela Asgard's Assassin, which was also co-written by Kieron Gillen. Of course, I do. It's about an assassin. And it's Thor's long-lost sister! Although Kieron Gillen says that it builds off a key point in Journey Into Mystery, so I might need to read that series first. No matter what, I'm picking up the newest issue of The Wicked + The Divine which comes out December 17, 2014.

If you like comics or are thinking about trying one out, you should definitely read The Wicked + The Divine. Especially if you like clever and sarcastic writing.

To satisfy FTC guidelines, I am disclosing that I received an advance copy of the book from the author through Netgalley in exchange for an honest review.