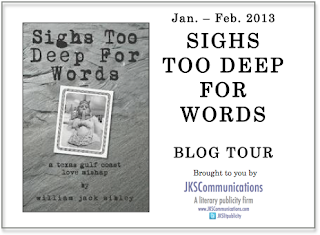 Sighs Too Deep for Words is the story of a man in prison who falls in love, through lengthy correspondence, with a woman he's never met. Getting out, he goes to find her and discovers that the love letters he's received were written not by a woman but by a closeted gay man -- a small town minister. Not only did the minister deceive the prisoner, but he sent a photograph of his sister (who lives with him) as a picture representing himself. And not only is the sister unaware of the ruse, but she herself happens to be a lesbian. The ex-prisoner has fallen in love physically with a woman who doesn't know he exists, and mentally with a man he doesn't know how to love. Set in the scenic Texas Gulf Coast fishing village of Rockport, Sighs Too Deep for Words is a darkly humorous and contemplative examination of the parameters of love, sex, sexuality and cultural perspective.

HOW TO WRITE A NOVEL IN TEN YEARS OR LESS!

Writing a book, any book, is a giant leap into the "volcano of the unknown." Takes brass, blissful ignorance and pioneer grit to plow through the acres of manure and earth to (hopefully) one day get flowers. Did I mention ignorance?

My second novel Sighs Too Deep for Words (originally titled Faded Love, but I'll circle back on that one) was originally to be printed by the publishers of my first novel Any Kind of Luck, Kensington in New York. My then agent advised me to instead shop it around as Luck had been nominated for three National Book Awards and we were on a roll. Alas, "the roll" ambled on about half a block and proceeded to commit hari-kari. Kensington got their feelings hurt and dropped me (slender threads, those corporate fealty things), and William Morrow spent about nine months both wooing and ignoring me as they fretted endlessly about whether or not to take me on. Naturally, after almost a year of patiently waiting (Agent, "We mustn't show your masterpiece to anyone until Lord William Morrow decides to roll over on the sofa!"), they, of course, thought better of taking a risk on me and tenderly kicked me to the curb (didn't feel a thing)!

And we were off! Got a new agent and suddenly become the greatest, most misunderstood writer since Tolstoy. New agent shopped me around to everyone on planet earth. I instantly become everyone-on-plant-earth's-second-favorite-novel-they-will-never-ever-publish. The rejection letters of anguish and tears of how crushing it was to say no to me as my genius was unsurpassed were truly touching. I re-read them occasionally when I need a good cry. Second agent fumed and fretted endlessly over my brilliant dilemma then quietly disappeared into an alcoholic haze in some Manhattan lunchroom, never to be heard from again. Yours truly took the fatted calf by the cojones and went bravely off on my own to conquer the Literary Establishment. (I did mention ignorance, right?)

After diligently sending out endless query letters and getting endless factory-form letters back, ("Dear Author, Thank you for your recent inquiry. At this time we are not accepting any new novels written by homo-sapiens between the ages of seven and ninety-eight. Should you fall outside this category please return the accompanying thirty-eight page dossier so that we may more fully understand your charming book proposal.") After months and months of fishing, I was finally able to snag a small but gritty independent publisher on the West Coast. "Greatest book we've ever read. Sheer genius. The majesty of your prose knows no equal ...", etc., etc. followed by, "Of course, we have no advance money to give you and we have no money to promote your book and you won't make a dime with us - BUT WE'LL GIVE YOU ALL THE ARTISTIC FREEDOM IN THE WORLD TO EXPRESS YOUR MOST DEEP, PROFOUND SELF!" How could I say no? "Artistic Freedom!" Who knew? I gushed to everyone I knew over the munificent pot I'd just fallen into. And so our brilliant collaboration got off to a glorious start. When I initially expressed to them that since I was being offered the impeccable opportunity of no advance money, no promotion and no foreseeable income, the one slight pique I'd had with my previous publishers was the less than thrilling book cover they'd given me. Could we work together and at least come up with something mutually acceptable? No problem! Gritty, independent publisher worked with some of the most gifted, talented, artistic prodigies in America! Actual quote, "There's no way you won't be satisfied with the cover of your new book!". The deep love and caring I felt from gritty, independent publisher knew no bounds. I'd come home! What's dirty money to an artist anyway?

And then actual cover prototype magically appeared. I blinked in amazement. Hard to conceive that it was actually worse than first novel's cover. Much worse. "Amateur Night in Dixie" worse. When I very calmly and politely proffered that, "Gosh, I just don't think this first cover design works for me. But since you 'work with some of the most gifted, talented, artistic prodigies in America,' I'm sure we'll come up with something acceptable for both of us in no time." Their immediate, head-snapping, response was, and I quote, "You're too difficult to work with. We're dropping you!" One lousy book cover submitted and suddenly I'm Osama Bin Laden for daring to question their intensely crapola first offering? I'm feeling unloved again.

Undaunted, I harness the mules and begin plowing earnestly. From adversity comes opportunity. (Shingles, sciatica?) Anyway, more endless query letters, more endless factory-form letters back. Six, nine months go by. This time a "gritty, independent ... impoverished, skid-row ... basically I'm working-out-of-my-bedroom" publisher in the Midwest surfaces. Once again my opus puts The Bible to shame. Such genius the world has never known. Of course no money, no promotion, no artistic nada being offered — and by the way you'll get the cover my third grader pencil sketches — take it or leave it. Naturally, I jump at the opportunity! Anything to get this six ton ape off my back. I sign yet again on the dotted line and begin drinking heavily. Months go by, no word. More months, more silence. Finally, with fear and trepidation I call. Their phone number has been changed (!) Visions of world's greatest unsung author hurling himself off Mauna Kea dance gleefully in my head. When I finally track down "Bedroom Publisher" he's moved to Florida to economize and, oh by the way, we won't be publishing your masterpiece for TWO MORE YEARS as we have quite a backlog of submitted manuscripts we have to attend to first. I softly tell "Bedroom Publisher" he can take his backlog and suppository them where the moon shines brightest and immediately cancel my contract.

Opus/Masterpiece goes into the desk drawer where it sits whimpering for four years. I write a play that gets showcased Off-Broadway, I write three screenplays that get optioned, I start a column for a local newspaper, I win awards, get accolades and life proceeds. Occasionally, late at night I hear Opus/Masterpiece scratching inside the desk. I ignore the unloved child. It must be punished for daring to request oxygen and daylight. And finally, one restless night I decide unloved child has suffered enough. I rise from my slumber, slapping my forehead with a "V8 Eureka" moment! Self-publish! Of course, you boob. NOTHING could be worse than the travesty you've already put yourself through. Publish and be damned, indeed. You need to put this behind you, get it out there and get it done. For God’s sake, let the cards fall already.

And it came to pass. I must admit, anxious as I was to resuscitate my foundling, the fear of self-publishing brought dread to my doorstep. Sure I'd read of all the well-known authors who'd self-published (and the list is endless; Remembrance of Things Past by Marcel Proust, Ulysses by James Joyce, The Adventures of Peter Rabbit by Beatrix Potter, The Bridges of Madison County, The Celestine Prophecy, The Elements of Style by William Strunk Jr., E. B. White, Deepak Chopra, Gertrude Stein, Zane Grey, Upton Sinclair, Carl Sandburg, Ezra Pound, Mark Twain, George Bernard Shaw, Virginia Wolff, Edgar Allen Poe, Henry David Thoreau, Walt Whitman - and on and on and on.) I was joining a very esteemed and illustrious band of independent-types. No harm there. But did I trust my own editing skills, "Masterpiece" notwithstanding? No problem there either. The industry has evolved light years on this issue. I worked with TWO different editors on SIGHS that were the equal (if not superior) to my first, large, New York house, publishing editor. No mollycoddling allowed. They put me through my paces; asked intelligent questions, demanded excess fat be trimmed, questioned motivation, corrected grammatical atrocities, suggested alternate revisions, held my hand, wiped my nose, and saw me through the process with very, very little bloodshed in the process. I can truthfully say it was a rewarding and even uplifting experience. Intelligent and consummate professionalism is required in any literary undertaking. A writer needs and must have sincere feedback. My Editors were indeed the "Better Angels" of this entire, drawn out experience and I thank them unconditionally.

(Oh yes, Faded Love. This original working title for my novel got smashed to bits on the rocks of Artistic Licensing after I approached the Estate of "Bob Wills and the Texas Playboys" for authorization to quote a line from their grand old country and western hit song, Faded Love. After all, I'd gotten permission from the Rogers and Hammerstein Estate when I quoted a line from their musical, Oklahoma, in my first novel, Any Kind of Luck. No problem. Despite being a fifth generation Texan and loyal acolyte of all things Bob Wills, the answer was not only no, but hell no! What to do? Steal an even better title from The Bible, of course! Sighs Too Deep for Words is an astoundingly beautiful and simple verse from Romans 8:26 that I scribbled in one of my notebooks many years back. Spirit intercedes with sighs too deep for words when you absolutely, positively, ultimately cannot proceed one more inch in life without some form of divine intervention on your behalf. It totally fit the bill. And that is precisely what happened to me, my novel and my life. May the "spirit of intervention" guide you in all your literary travails.)

Readers can also download the book onto their digital device right now on NetGalley. 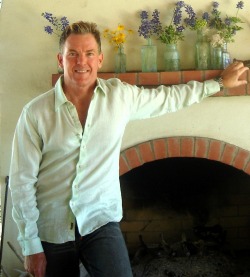 William Jack Sibley's first novel Any Kind of Luck (www.anykindofluck.weebly.com) was published by Kensington in 2001. It was nominated for a Lambda award (Best Romance), The Texas Institute of Letters "Funniest Book of the Year" John Bloom Award and the ForeWord Magazine Book of the Year. His play Mortally Fine was produced Off-Broadway and numerous of his screenplays have been optioned by such directors and actors as John Schlesinger, Arthur Hiller and Diane Ladd. His writing has appeared in the Utne Reader, Hallmark Magazine, Brilliant Magazine, The San Antonio Current, The Orlando Weekly, The Dallas Times Herald, Heritage Magazine, Texas Co-Op Magazine, The Dead Mule ("A Journal of Southern Literature"), Flying Colors, Southwest Airlines Magazine, and The New York Native. In addition to screenwriting, playwrighting, and journalism Sibley is a fifth generation Texan who oversees his family's ranching operations in South Texas.


Find out more about William Jack Sibley at www.williamjacksibley.com