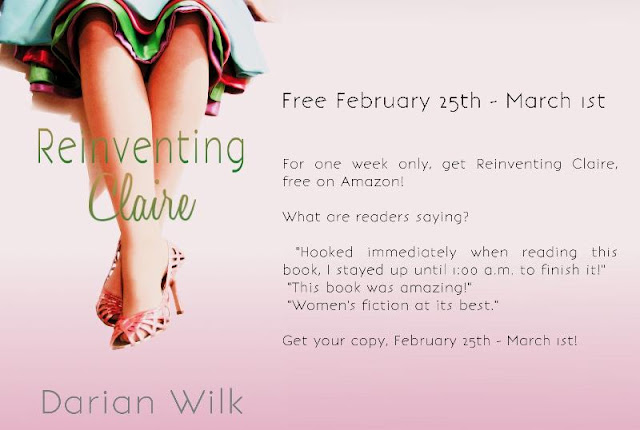 Reinventing Claire by Darian Wilk is FREE this week (2/25 to 3/1) on Amazon. Get your copy and find out how to enter to win a $20 Amazon Gift Card below. 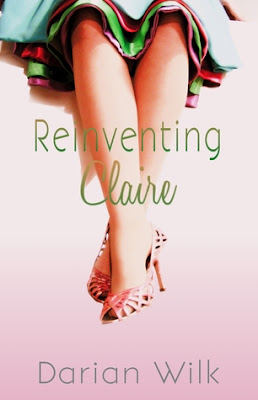 People get divorced, but that's what happens to other people. That's what Claire thought anyway, until her husband, Charlie, tells her he wants a divorce.

Claire has no choice but to take on the title of Divorced Woman, and face the question she has no idea how to answer. Who is Claire without Charlie? Her family believes her newly divorced woes can be cured by landing herself a boyfriend. With her dating dunce cap in hand, Claire stumbles her way through the foreign territory of online dating.

A teacher from hell, a softball coach, and a sap later, Claire proclaims herself the dating idiot she thought she was, and fears she's doomed to be a lonely, crazy cat lady. But an accidental run-in with an old acquaintance might change everything. What starts with comparing dating battle wounds over a cup of coffee, quickly turns into something Claire had given up on.

As Claire discovers maybe there is love after Charlie after all, Charlie realizes his mistake. He wants her back, and he'll do anything to prove it to her. Now Claire must choose who deserves her heart, and if she's really willing to give it away again.

Darian Wilk was born in Myrtle Beach, South Carolina, the younger of two children. While still a toddler her family moved back to their home state of Michigan, where she still lives today.

After high school Darian tried her hand at college, majoring in Nursing, while she worked as a Physical Therapy Technician. "I loved my job, but I still couldn't picture doing it forever," she says now. But before she finished her degree she became pregnant, and focused her attention on the challenges of being a single mother to her daughter.

In 2005, Darian married her best friend, Steve, whom she met and became close friends with several years earlier. In their second year of marriage, Darian became pregnant with her son. She worked on and off throughout her twenties as a Home Health Aid to the elderly, but preferred to stay home and raise her babies.

In 2007, her mom was diagnosed with ovarian cancer, and Darian quit working to tend to her mom. It was in those three years of taking care of her that Darian realized how precious, and short, life really is. In her moms last year of life, she finally had the courage to pursue what her heart always secretly longed for; becoming a writer. It was then that she started her debut novel, Love Unfinished, and continues her writing journey today.


Find out more at DarianWilk.weebly.com.

One winner will receive a $20 Amazon Gift Card.
Open internationally as long as you can use a Amazon.com gift card.
Giveaway ends at 12:00am EST on March 1, 2013

This book blast and giveaway is hosted by Krazy Book Lady.