Review: The Girl with the Windup Heart by Kady Cross 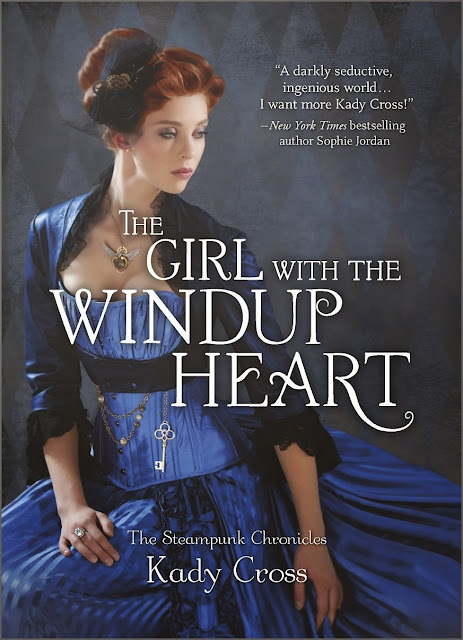 In 1897 London, a final showdown is about to begin.

London's underworld is no place for a young woman, even one who is strong, smart and part-automaton like Mila. But when master criminal Jack Dandy inadvertently breaks her heart, she takes off, determined to find an independent life, one entirely her own. Her search takes her to the spangled shadows of the West End's most dazzling circus.

Meanwhile, taken captive in the Aether, Griffin King is trapped in an inescapable prison, and at the mercy of his archenemy, The Machinist. If he breaks under the hellish torment, The Machinist will claim his powers and control of the Aether itself, and no one in either world will be safe-especially not Finley Jayne and her misfit band of friends.

Finley plunges headlong into the Aether the only way she knows how, by temporarily dying. But she cannot parry The Machinist's maneuvers for long. To defeat him for good, Griffin will have to confront his greatest fear and finally come face-to-face with the destructive power he wields.

I really loved the first book in the series, The Girl in the Steel Corset, and its The League of Extraordinary Gentlemen feel. But each book has gotten progressively less enjoyable to me. It took me a long time to read The Girl with the Windup Heart, a lot longer than any other book has taken in the past few years other than the Song of Ice and Fire series (and those books are at least twice as long as this one). Partly because life has gone crazy and I barely have time to do anything just for me, but partly because I wasn’t compelled to read it. I didn’t have that urge to pick up the book, needing to know what happened. Which is strange because a lot of situations in this book should have been suspenseful.

Griffin has been kidnapped by the villain who has haunted the gang's steps the whole series. But I never really felt any real fear for Griffin. I knew the gang would get him out, and they would beat the bad guy. Even the relationships in the story were less than compelling to me. I felt like the things that were concentrated on should have been smaller parts, and the smaller parts should have been bigger. Like I really wish there would have been more in the story regarding Finley and her dad.

Finley bothered me and annoyed me, which is odd, because she never had before. I always really liked Finley. She just seemed so headstrong and idiotic in this book. She rushed into situations without thinking (which is a Finley trait), but before I could see why. In this situation, she just seemed reckless and selfish. She wasn't the only person who wanted Griffin home and she wasn't the only person who had ideas or abilities to bring him home. Yet she bullied her friends and pretty much acted like a brat.

I also felt like some of the gang lost some of their personalities in this book because it was so concentrated on Finley/Griffin and Jack/Mila. Emily lost a lot of her brilliant, snappy wit and just became the go-to fix-it mothering/harping type. Jasper and Wildcat received only a few scenes as well. The best scenes were the ones where we saw Emily’s mechanical abilities, Wildcat’s tracking abilities and Jasper’s speed. But those are very few and far between. I actually liked Sam more in this book, because he wasn't as abrasive. He and Finley had finally come to an understanding in their love for Emily and Griffin.

The relationship between Mila and Jack just made me uncomfortable. For all of Jack constantly saying that Mila was just a child, his sexual interest in her made me extremely uncomfortable. Mila herself was also less than compelling for me. At first her extreme naivete was cute, but then it just got old rather quickly.

There was also a scene at the end of the book that felt inconsistent. Jack’s villain’s downfall is brought about by something that seems quite out of character for the villain. I don’t want to spoil anything, so all I will say is that when I read the scene I was immediately confused and didn't believe that the villain would have actually done that.

Overall, The Girl with the Windup Heart was a finale book that just felt like a finale book. The author wrapped up all the loose ends, but it seems like the author was trying to do too many things and didn’t concentrate enough on one of them to make the story work. I still have fond feelings for the beginning of the series, so I’ll rate this higher than I would have if I was just checking out the series at this book. I wouldn't recommend trying to read this book if someone hadn't already read the rest of the series. Will I read another Kady Cross series? Sure, there was enough potential and things that I loved for me to give it another try. Will I be a little apprehensive about it? Maybe.