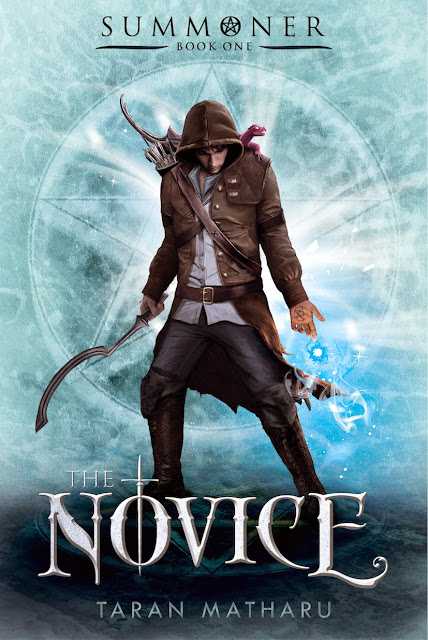 When blacksmith apprentice Fletcher discovers that he has the ability to summon demons from another world, he travels to Adept Military Academy. There the gifted are trained in the art of summoning. Fletcher is put through grueling training as a battlemage to fight in the Hominum Empire’s war against orcs. He must tread carefully while training alongside children of powerful nobles. The power hungry, those seeking alliances, and the fear of betrayal surround him. Fletcher finds himself caught in the middle of powerful forces, with only his demon Ignatius for help.

As the pieces on the board maneuver for supremacy, Fletcher must decide where his loyalties lie. The fate of an empire is in his hands. The Novice is the first in a trilogy about Fletcher, his demon Ignatius, and the war against the Orcs.

The Novice felt like it was a video game trying to be a book, which should have been perfect for me. Every time I picked up the book and read about orcs, mana and demons in the students' roster, I picked up my newest gaming obsession - Final Fantasy Record Keeper. This meant that this book took me about three times longer than necessary to read.

Other than the fact that I found The Novice entirely too easy to put down, I was also pretty bored for the majority of it. I'm used to getting lots of world building and some boring scenes in high fantasy (especially in the journey variety), but I while I thought the world was interesting, I didn't appreciate the way the information was given to me. The way that the teachers were constantly giving the students every piece of information on the demons was just an unnecessarily boring info dump. I think I would have liked it more had Fletcher learned some of the information on his own or if some of his fellow student had clued him in. Somehow it wasn't nearly as intolerable when Hermoine did it in Harry Potter. ;)

Also, nothing really happens at the school other than the information overload and the awful nobles until the end of The Novice. I wish that the tournament at the end of the book had encompassed more of the novel than it did. We mostly only get Fletcher's point of view, but I think that it could have been extended to see the fights through his friends' eyes.

I also wish that we would have gotten more information on the world and the political intrigue. I want to know what happened to star the war with the orcs, and where exactly is the demons' original home? I liked the bond between the humans and the demons, and I liked the video game-like slant to the story, but I don't think that it's going to be enough to be unforgettable for me.