Waiting on Wednesday (106): Cast in Honor by Michelle Sagara 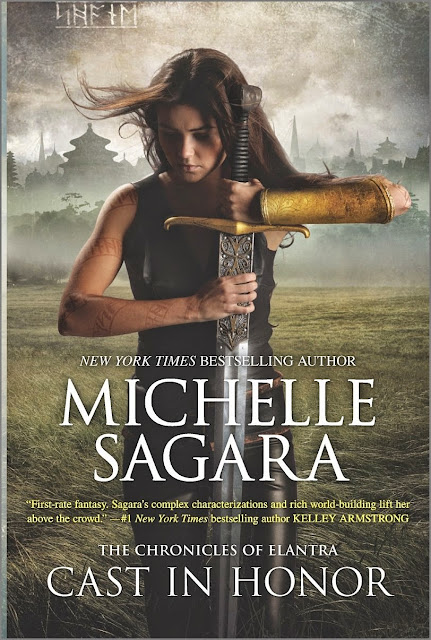 In the aftermath of a vicious battle between darkness and light, the city of Elantra has emerged victorious. But Shadows continue to haunt every corner of its streets...

Elantra stands strong, but countless numbers of Hawks, the city's staunchest protectors, were lost in the brutal attack. Humans, Barrani, Aerians, Leontines—none of the races emerged unscathed from the defense of the city. Homes were lost, families were scattered…and the outcast Barrani Lord Nightshade is missing from his castle in the fiefs.

Yet as the chaos surrounding the battle begins to wane, Private Kaylin Neya's duties must resume, despite her grief. Called in to investigate a triple murder in a quiet part of town, Kaylin and her companions are soon embroiled in a case that is anything but routine. Evidence of the deadly Shadows that still threaten the city leads to hints of ancient, forgotten magics. And a visit to the Oracular Halls points directly to Ravellon—the heart of the Shadows and the darkness they contain.

But it is there that Lord Nightshade will be found—if he still survives.

The Chronicles of Elantra is a solid fantasy series, and I can't wait to read the next one. The world has a really cool concept, and it's one that I really hadn't quite seen before. It was a little hard to grasp for the first book, but by the third book I was hooked. The series is even better on audio, because the fabulous Khristine Hvam narrates. I need to check out Sagara's other series, which she sometimes writes as Michelle Sagara West or Michelle West.