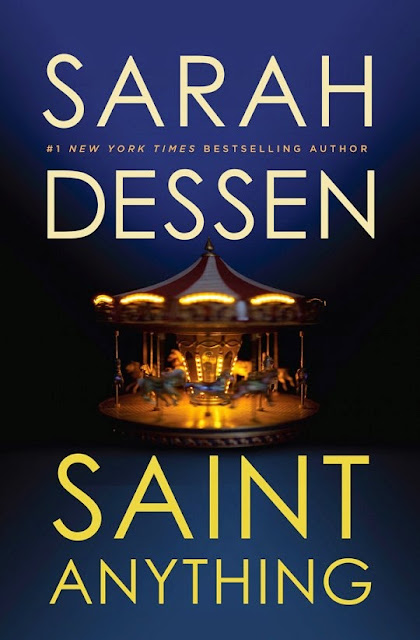 Peyton, Sydney's charismatic older brother, has always been the star of the family, receiving the lion's share of their parents' attention and—lately—concern. When Peyton's increasingly reckless behavior culminates in an accident, a drunk driving conviction, and a jail sentence, Sydney is cast adrift, searching for her place in the family and the world. When everyone else is so worried about Peyton, is she the only one concerned about the victim of the accident?

Enter the Chathams, a warm, chaotic family who run a pizza parlor, play bluegrass on weekends, and pitch in to care for their mother, who has multiple sclerosis. Here Sydney experiences unquestioning acceptance. And here she meets Mac, gentle, watchful, and protective, who makes Sydney feel seen, really seen, for the first time.

I am a newer convert to the Sarah Dessen cult following, but I have loved almost everything I have read by her, and I enjoyed her newest as well. Saint Anything has that Sarah Dessen touch with the focus on family and friends in a believable coming of age story, but it's darker than any other Dessen novel I've read (I have only not read Dreamland). However, even with the darker touches, I still closed the novel with a smile on my face.

I was a little confused when I first saw the cover, because it didn't really look like a Dessen novel. However, both the carousel and the title have a meaning within the story, so I get it. I still think that the cover isn't really a Dessen cover, but never judge a book by it's cover, right?

Sydney's relationship with her parents, her brother and her brother's best friend were complicated and on a more adult tone than other Dessen books. Sydney's brother, Peyton, has gone through a rebellious phase which ended in a stupid night of drinking and driving, a young boy hurt, and her brother serving a jail sentence. Her brother's best friend gave me the creeps for the entire novel. I don't like how Dessen handled Sydney's reaction to the friend and her parent's obliviousness to the problem.

The narrative at the beginning of the novel was a little confusing, and I didn't really like the tone. I wish that some of it had been taken out or had been given in a show rather than tell tone.

For every Dessen novel, I have marveled at how Dessen can take everyday issues prevalent among teenagers, but make the teens completely relatable even if the situation isn't. Sydney is a rich kid who has a troubled brother, and is used to feeling invisible next to her equally charismatic sibling. Even if you don't relate to Sydney, there's always Sydney's old friends who are dealing with growing up and breaking the rules, or Sydney's new friends who are struggling with lack of money and a sick family member.

While this may not have been my favorite Sarah Dessen novel (that would probably be Just Listen or The Trust About Forever), it's still a good addition. If you're new to Sarah Dessen, but like YA with a focus on family and friends with a sweet but believable love story, then try Saint Anything, or one of my faves, or any of her books, really. If you already love Sarah Dessen, then I think you'll feel like I did: opening up the pages of a book that feels like an old friend.

To satisfy FTC guidelines, I am disclosing that I received an advance copy of the book for reviewing purposes through First to Read in exchange for an honest review. This has in no way affected the outcome of my review.