Top Ten Tuesday: Books I Love, But Never Got Around to Writing a Review

Top Ten Books That I Love, But Never Got Around to Writing a Review

This is The Book I recommend to everyone when they are looking for something to read, and have no idea what they want. You get romance, historical elements and food. My perfect trifecta.

2. The Secret History by Donna Tartt

A New England college, students who think their eccentricities make them better than everyone else, a murder, booze, pills, secrets, and more murder. This book made me want to keep reading to see just how far they would go. Plus I have a thing for books with with horror/mysteries that take place on the East Coast, which I attribute to reading Stephen King at a very young age.

3. The Westing Game by Ellen Raskin

This is a book for middle schoolers, but I read it every five years or so. Sixteen people gather for the reading of Sam Westing’s will. An eccentric man who loved to play games, and wants this to be the final one he will play. The winner of his vast fortune could also be his killer. My sixth grade teacher read this to us, around the same time I saw the movie “Clue”. I think this is the reason I fell in love with mysteries.

4. It by Stephen King

You’ve probably seen the movie and maybe even read the book. And if you haven’t they are remaking the movie soon, so you’ll get another chance. This book is the ultimate in horror. A monster that will show up as your greatest fear. A friend’s mom gave me this book to read when I was in high school and I devoured it over a long weekend.

While all my friends were reading R.L Stine in middle school, I found Christopher Pike. His books dove deeper into the evils of the human heart, and had a harder mystery to solve. I enjoyed most of his books, but this is the one that I have read at least a dozen times. It involves a play put on by students, where there’s a murder in the last act. But someone replaces the blanks with real bullets.... Dun, Dun, Dunnnn! Corny by today’s standards, but hey, I was in drama club in high school, and felt a kinship.

This book is so hard to explain, and it took me forever to read it, since it was confusing at times. But I had to finish it. It was so weird and disturbing that I think it will stay with me for the rest of my life. I don’t know what to say. Just read it.

I love all things witchy. When I saw the title of Allen’s debut book, I knew I had to read it. The book is a nice read for on the beach or when the air starts to get brisk and the leaves begin to change color.

The story revolves around family, magic and food. Another great trifecta.

Since I just mentioned loving all things witchy… I enjoyed the book and the movie equally, and for different reasons. The book delved much more into the mystical and psychological part of witchcraft, Whereas the movie had wonderful actors and an awesome midnight margarita scene.

Another great book about family, magic and food (The pancake scene comes to mind.)

9. The Dresden Files by Jim Butcher

Okay, this isn’t one book, the series is currently up to 15 books, but still, it’s Harry Dresden! With a lot of series there will be some books that are just not as good as the rest, but I have enjoyed every book in this series. It’s a perfect blend of magic and mystery. Wizards, witches and fairies. Oh, My! 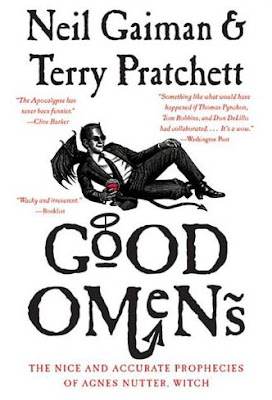 Good and Evil are gathering because the end of times are here, but an angel and a devil have come to like living on earth. What kind of crazy plan can they come up with to save the world?

After Like Water for Chocolate, this is the second book I recommend to people. My husband introduced me to this book. He is awesome, and so is this book.

Which books do you love but have never gotten around to reviewing?