Review: The Time Weaver by Thomas A. Knight 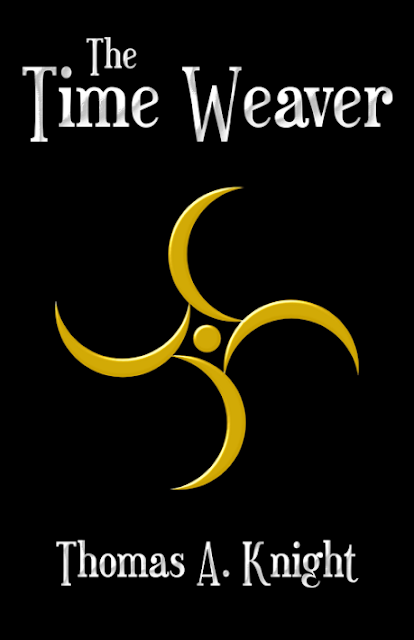 The Time Weaver starts with a small jump back to the main character’s childhood, where his father, ominously and mysteriously, has to leave the family as “he” has found them. Then we jump to the main story. Seth is a software designer (Funny thing is, the author is also a software designer. If I were to write a book, I’d definitely make my main character a translator. Sorry, The Translator. Handsome, charismatic, charming and swashbucklingly awesome. It would also be in the genre of fantasy... Ok, moving on. *grin*)

After a bit of back-story and setting things up, it gets interesting. There’s a car crash. Time stops. A huge ass werewolf thing rends space and time and claws its way to Seth, our main character. Who promptly proceeds to metaphorically shit his pants and run like hell. I would too, mind you. I may be swashbuckingly awesome, but mama didn’t raise no dum-dum. Big ass werewolf thing = run. If you leave this blog learning nothing but one thing, let this be that one thing. Run away from big ass hairy things. Unless you’re into that sort of thing. In which case, have fun! *wink*

From the car accident/space rend incident, the book takes off for me. It starts good. I enjoyed it a lot. And as you read on, it gets better. And better. There are times when I feared it would fall in clichés, but it doesn’t. When I thought Seth would go one path, the normal fantasy drag-things-along path, BAM, fireball to the face. Seth felt out of place and confused and scared shitless, but when push came to shove, he got things done.

None of the usual stumbling along, never quite mastering your powers until the very last second, good guy doesn’t kill a fly cause it would be wrong. Nope. Allow me to grab my light sword, which I materialized out of thin air, and skewer you like a kebab. I said good day. I. Said. Good. Day. !

There was self-doubt, and running away, and crying. But only to a manageable degree. If he’d been all and blasé about it, no chance I’d bought it. If I were attacked by a 12 foot beast thing and dragged to another world through a lightning emitting wormhole thingy, I’d be mildy nervous. So I can’t judge others, fictitious characters or not. I bring this up because self-doubt in main characters usually annoys me. It didn’t this time.

I liked two things the most. I feared the characters would be predictable. The old arch-magus. The smart-alecky bard. The fierce stubborn female warrior. I was pleasantly surprised. They were not formulaic at all, even if they did seem so at first. Not sure if it was actually the case, or if my preconceptions made me think of them that way. Regardless, I liked them all. I agreed with their choices pretty much at every turn. I was sad when some of them died. Happy when some of them didn’t, or did. There was this one douche that had it coming, but didn’t get it. But there’s always book two! *happy*

The other thing I really liked was the story. It starts out normal, for a fantasy that is. And then it grows. And grows. And doesn’t really stop until the end. Characters develop, the story unfolds, it expands, it breathes. I stayed up till 1am to finish reading it. Didn’t play Skyrim (awesome game by the way). Didn’t watch Doctor Who (awesome show if you haven’t seen it for some reason). I found this book to be that good.

I’m really looking forward to book two. I hope the author gets a few of the kinks out. (There were some points in the book were I felt something was a bit off, but couldn’t figure out what it was – didn’t detract from the experience though). I hope it lives up to my expectations and the potential the story, and the author, have. And I hope I get to read it and review it. Great story, great characters, great read. Happy little reviewer here. :)


Buy Your Copy Today on Amazon!
Be sure to add it to your TBR list on Goodreads!

Labels: Fantasy, Review, The Time Weaver, Thomas A. Knight, Will
Email ThisBlogThis!Share to TwitterShare to FacebookShare to Pinterest