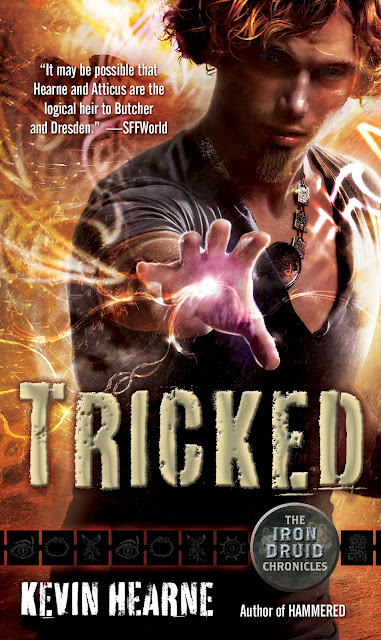 Tricked by Kevin Hearne is the fourth installment in his urban fantasy series, The Iron Druid Chronicles. In this book, our hero (and my book boyfriend), Atticus O'Sullivan; his dog, Oberon; and his apprentice, Granuaile face the repercussions of Atticus' trip to Asgard, as well as a few new issues thanks to the Navajo trickster god, Coyote.

The Writing of Tricked reminded me of precisely why I love to read. It's easy for me to lose interest in books because I'm such a picky reader. (Yes, I am an avid reader, but I'm not an easy one to please. I try to tone that down here on the blog.) Kevin Hearne's quirky humor and heavy use of both nerdy pop culture and literary references lovingly caresses the inner dweeb in me. Tricked is also obviously heavily researched. The book (and series) is loaded with facts about various mythologies and poisons, as well many other trivial knowledge that went over my head (such as mining equipment) - not that it was boring. I just used that time to pretended that I could beat up Granuaile and take her place roaming the world with Atticus and Oberon. Anywho, research is always appreciated, even if it's something I do not exactly understand. At least someone does, right?

As far as character development goes, it was not quite as deep as Hammered (where we were offered an EPIC male-bonding/past history scene), but it was well done as far as Atticus goes. A deeper glance is given into Atticus' time in Africa with his wife, what brought him to the New World, and we learned a bit more about his archdruid master/trainer. (I'd bet money that this guy comes up in the next book or two.) However, there is still much more that I'd like to learn about Granuaile since she's becoming such a major character in the series. Oberon, on the other paw (see what I did there?), requires no development as he sprang from Hearne's brain fully equipped with all of the awesomeness allowed in a literary character without the world imploding. He has easily become my favorite character in the series, despite my very creepily real crush on Atticus. 4.5/5 Stars

Kevin Hearne's created reality in Tricked is one that I often fantasize about being the one we actually live in, so the World-Weaving is successful for me. Everything exists as it is in our own world except that all the gods of all religions are real and able to walk among us, along with other paranormal and supernatural creatures. All of the creatures and myths are used successfully in the world-building and execution of the story and are never too much. Again, it is his research that makes this aspect of the story shine. 5/5 Stars

The Pacing of the story was a little off compared to the other novels in the series. I thoroughly enjoyed the story and never lost interest, but the ride was a little bit bumpier than the first three novels. If you want me to be honest, I was somewhat disappointed in the outcome of Mrs. MacDonagh, who was one of my favorite characters. I've been waiting a year to find out what happened to her since the end of Hammered, and the letdown made me grip the book slightly less tightly throughout the rest of it. 4/5 Stars

As always, the Extra Magic in Hearne's novels are the unapologetic nerdiness found within the pages. The first Star Wars reference is made on page two, and the hilarity continues throughout the book, even when things get serious. Two of my favorite quotations happen very early on in Tricked.


As I shampooed Oberon's coat, I explained how to craft hypotheses and test them empirically using a control. And then I stressed safety while I rinsed him off.

"It's best not to experiment on yourself. Bacon practically froze himself to death in one of his experiements and died of pneumonia."

< Right! Bacon must be heated. Knew that already, but thanks for the reminder. >

That, my friends, is what a book needs to make me giggle and love it. And I loved Tricked. Even if Fragarach was not the main sword, and I did not get to sing the Fraggle Rock theme song in my head every time Atticus drew it. Maybe I should refer to the first three books in the series as the "Fraggle Rock Trilogy" from now on. *grins* 5/5 Stars


Buy your copy today - Amazon | Barnes & Noble | Book Depository | Fishpond
Be sure to add Tricked to your "to-read" shelf on Goodreads, too!

To satisfy FTC guidelines, I am disclosing that I have not received any sort of compensation for my review. The book was purchased by me with money that I made from my jobs that do not pay me nearly enough. All opinions expressed are fangirly, honest, and completely my own.