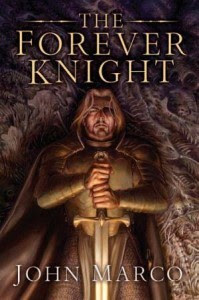 Lukien was once the Bronze Knight of Liiria, close companion and champion to King Akeela, and commander of his king’s Royal Chargers. Tall, golden-haired, and handsome as a god, he never knew defeat, and was beloved by the people he protected. But that had been long ago: before he betrayed his king and closest friend by falling in love with the one woman who was forbidden to him—the king’s wife, Cassandra. This illicit love tore apart the foundations of Lukien’s world, causing war, madness, and death. But it also opened Lukien’s eyes to a force previously unknown to him—the power of magic.

In his ill-fated attempts to save his dying love, his now-mad king, and his fragmenting country, Lukien discovered a hidden fortress deep in the southern desert. In this fortress, called Grimhold, all who lived were protected by Akari—spirits of long-dead magicians. The magic the Akari imparted was unique to each person: a hunchback was gifted with the strength of ten men, an albino boy with the ability to vanish, a blind girl could see through the eyes of her Akari spirit patron. But ultimately even this remarkable discovery could not save his country, his king, or his love.

Now Lukien was a broken man, held together only by his own Akari spirit protector, a long-dead magician named Malator, who resided in the magical Sword of Angels that Lukien wore. War-weary and brokenhearted, Lukien wished only for the release of death, which he believed would reunite him with his beloved Cassandra. Instead he was given a new commission: to protect the occupants of Grimhold and Jador, the nearby desert city. And Malator had given Lukien the one thing he wanted least of all: unending life.

But though the world still teemed with war, Grimhold and Jador were unchallenged, and thus did not need protection. Why would the Akari grant immortality to a man with no cause?

You may want to step over there while I gush about this book, but don't run away. I know what you may be thinking - it's the fourth book in a series. I haven't read the others either, but the instances where that was a minute issue were very rare. The Forever Knight did fine being read alone because Lukien, the main character, is having a new adventure that has almost nothing to do with the previous books in the series. Also, who doesn't love a good epic quest?

Let me tell you a little bit of something about Lukien. He is the classic hero that could be pulled out of any myth, story, or legend. He is practically immortal, damn near invincible, and up to his ears in good ol' hubris. Most of the time, I know these guys have it coming and just wait for it to happen. However, Lukien is something special. I have not become attached to such a hard character in fantasy since Roland Deschain. (Okay, he's not as hard as Roland.) What made him special is that he did not try to push everyone away. Even at the beginning of the novel, John Marco made it abundantly clear that Lukien was a man who was still very capable of love. I saw early on how much various other characters meant to him: Gilwyn, White Eye, and especially Cricket. His relationship with his Akari, Malator, was a little more complicated, but it usually showed Lukien in a positive light.

This book crawled into my head and under my skin because of the fantastic quest that Lukien undertakes in order to help Cricket go to Akyre - one of the Bitter Kingdoms that is in the middle of war - to find her lost memories. Malator warns him against doing this, but Lukien wants to both help Cricket and get out of Jabor to fight some battles and do some good. While on this journey, they find themselves caught up in the middle of an insane king who wants to be emperor, his Legion of the Lost, a damned wealthy spice merchant, and a monster who may or may not be tied up in all of it. I could not put the book down until I was able to see how it all played out. It was a little sad at times, but as an experienced epic fantasy reader, it wasn't anything that I didn't see coming.

The Forever Knight was a wonderful fantasy novel that I thoroughly enjoyed being sucked into. Lukien and his quest was a great adventure to read, and I will definitely be going back to read the first books in the series. I think anyone who enjoys fantasy, mythology, or just a good story will like The Forever Knight, too. 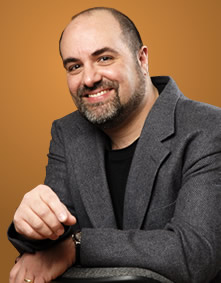 John Marco is the author of seven previous books. His debut fantasy series, Tyrants and Kings, earned him a Barnes and Noble Readers Choice Award and has since been translated into numerous languages around the world. His first three novels of Lukien, The Eyes of God, The Devil’s Armor, and The Sword of Angels have received high praise. In addition to his work as a novelist, he is also a proud and avid nerd and blogs at his website, thehappynerd.com. He lives on Long Island with his wife and young son.

To satisfy FTC guidelines, I am disclosing that I received a copy of the book from the author via TLC Book Tours in exchange for an honest review. It has in no way affected the outcome. All opinions expressed are rambling, honest, and completely my own.