Blog Tour (Excerpt): The World Below by Mike Phillips 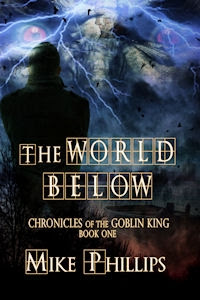 In ancient times, magical creatures inhabited the earth. They lived on mountaintops, in trees, at the bottom of lakes and rivers. But that was long ago, before the human race declared war on the creatures they feared and hated. Now the enchanted peoples are all but gone. Those few that remain fear being stretched out on an examination table in some secret, governmental facility.

The only place they can hide from the ever increasing number of satellites and smart phones is in the World Below. Mitch Hardy is going through a hard time in his life. In his early twenties, he was working his way through college when he suffered an accident that left him flat broke and physically deformed. When Mitch decides to make a fresh start in a new town, things start looking up. He finds a place to live, a decent job, good friends. He even meets a nice girl. Unknown to Mitch, his new girlfriend is one of the Elder Race, what some call the Faerie Folk. Mitch doesn’t know that Elizabeth is looking for a father she never knew. The key to finding him is somehow tied up with the mysterious Blade of Caro. Desperate, she steals the Blade from its protector, the despotic ruler of the World Below, the Dragon of Worms, Baron Finkbeiner. When Elizabeth is kidnapped by the Baron, Mitch is pulled into a world or magic and monsters he never imagined.

Extending his hand, the Baron asked, “Please? Have a look?” He smiled his wicked smile, showing a mouthful of pointed teeth.

Glaring, uneasy, Hume did as he was asked.

Light from the crystal ball shone once more. This time Hume gave himself up to its magic, allowing the warm light to surround and envelope him. His skin tingled. He looked up and found the Baron travelling into the light with him.

“Here we are. Not much longer now,” the Baron reassured him.

They floated in a blue sky. The air was fresh and smelled of flowers. Clouds as thick as cotton dotted the air around them. Below was a little homestead. The walls were made of logs and the roof of shake shingles. There was a wide garden with a cherry orchard and strawberry patch. A pasture held a jersey cow and a pair of goats. Chickens pecked in the yard.

“I try to make my guests as comfortable as possible.”

“Yes, quite so, but let’s not quibble over semantics.”

“Your prisoners wouldn’t call it that.”

They landed on the garden path and walked up to the front door. A knock on the door was met with silence. No one was home.

“This way, I think,” said the Baron. “My prisoner, as you say, will not be able to see us or touch us. We are only observers, not really here at all if you take my meaning.”

“Shared illusion. I know the drill.”

“Good, then it goes without saying we cannot harm each other either.”

“Temper, temper,” the Baron said wickedly, leading them down the garden path. “I rule here.”

At the far side of the orchard, they found a trail to a little stream. The grass was thick and insects buzzed around their ears. A garter snake a foot long and thin as a pencil raced across the path.

When they came to a stream, they found a girl sitting on the rocks. Her back was turned to them and she held a pole in her hand. She had long, dark hair and a simple sundress with a floral print.

Use the code 50WORLDBELOW for 50% off at Damnation Books during the tour!

Mike Phillips is author of The World Below and Reign of the Nightmare Prince. His short stories have appeared in ParAbnormal Digest, Cemetery Moon, Sinister Tales, Beyond Centauri, the World of Myth, Mystic Signals and many others. Online, his work has appeared in Lorelei Signal, Kzine, Bewildering Stories, Midnight Times, and Fringe. He is best known for his Crow Witch and Patrick Donegal series.

You can find out more about Mike on his Website.