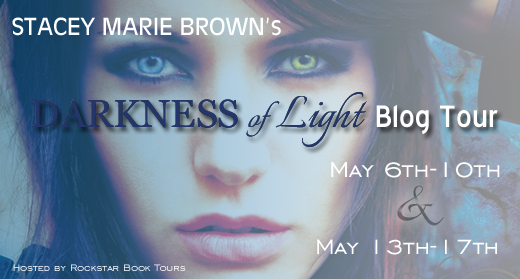 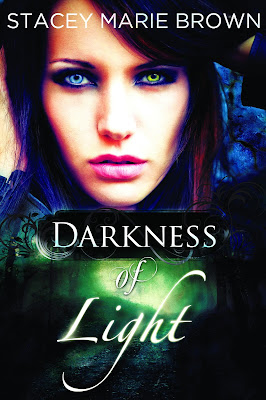 Ember Brycin has been called them all. She’s always known she’s different. No one has ever called her normal, even under the best circumstances. Bizarre and inexplicable things continually happen to her, and having two different colored eyes, strange hair, and an unusual tattoo only contributes to the gossip about her.

When the latest school explosion lands her in a facility for trouble teens, she meets Eli Dragen, who’s hot as hell and darkly mysterious. Their connection is full of passion, danger, and secrets. Secrets that will not only change her life, but what and who she is—leading her down a path she never imagined possible.

Between Light and Dark, Ember finds a world where truth and knowledge are power and no one can be trusted. But her survival depends on finding out the truth about herself. In her pursuit, she is forced between love and destiny and good and evil, even when the differences between them aren’t always clear. At worst, she will incite a war that could destroy both worlds. At best, she will not only lose her heart but her life and everyone she loves. Once the truth is out, however, there will be no going back. And she’ll definitely wish she could.

Who doesn’t root for the underdog? You want to see the nerdy, scrawny kid fight back against his bullies and that awkward girl stand up to those mean girls. Bullying has probably been around since the beginning of civilization. I doubt it will ever really go away. I, too, suffered from the “mean girl” experience. It is a part of life, and my own experience has made me who I am now. It forced me to be a stronger person. These incidents can actually be turned around and used in a positive way. It can make you fight harder, work harder, and appreciate things more.

Sadly, in todays’ society, bullying has been taken to whole new level. The digital age has turned bullying into an inescapable mass media torture device. With the social media so available, it is so easy to bully or be bullied. It can even come from people you don't know—creating crueler people as they can sign anonymously and say whatever they want. With this shift, and this obsession to publicizing our every waking moment, came new ways to embarrass, intimidate and torment. Bullying is not only just for kids on a playground. The web is the playground now, and it is for all ages. Sadly some bullies never grow up.

My book, Darkness of Light, doesn’t deal with the media form of bullying but opens up with the main character being harassed, which contributes to an event that gets the heroine kicked out of school. Her tormentor actually is the catalyst that leads Ember to discovering who she is. In a way she helps lead Ember to her destiny.

There is no doubt my experience influenced how I wrote Ember. I will always be for the underdog. They are far more interesting. I was expecting some readers to relate to her, but I wasn’t expecting the amount of people who have connected to her. She is different and doesn’t fit in. Her appearance has some to do with that, but I think it is her internal fight that people connect to. On the whole she is an average girl (minus the strange eyes)—just a jeans and a hoodie kind of girl. But she still doesn’t feel she belongs. I think a lot of people can relate to this. They may not look like the “typical” outcast, but that doesn’t take away from them feeling like one.

That is how I felt in junior high/high school. I looked normal, but I didn’t feel like I fit in and others could sense this about me as well. I didn’t enjoy the typical things a “normal” kid my age seemed to. I hated rallies, football games, and dances. It wasn’t 'til I got out and met more like-minded people did I finally feel I belonged. I know so many others felt this growing up, and I always want to tell them that they are not alone. It will get better and you will be a better person for it. High school is such a minuscule time in the grand scheme of your life. I know it feels like everything at the time. It so isn’t! The best things that happened to me were after high school—experiences, friendships, and loves. Just stay true to yourself and follow your dreams. Who cares what anybody else thinks? Do your thing. You will be happier for it!

Ember learned this early. She is constantly judged by others for what they want her to be, not who she really is inside. She does not let them get to her. Sometimes she feels broken and confused and has moments of insecurity and doubts. That is normal. We all do. But, she never doubts her self-worth. That is what I hope girls will see when reading this and remember to never let go of that in themselves. 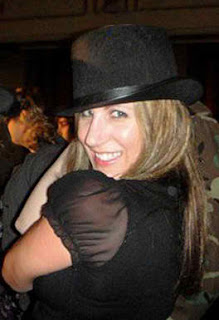 Stacey Marie Brown works by day as an Interior/Set Designer and by night a writer of paranormal fantasy, adventure, and literary fiction. When she’s not writing, she’s out hiking, spending time with friends, traveling, listening to music, or designing.

Enter to win one of five (5) eBook copies of Darkness of Lightin the eBook format of your choice.