Review: A Shot in the Dark by K.A. Stewart 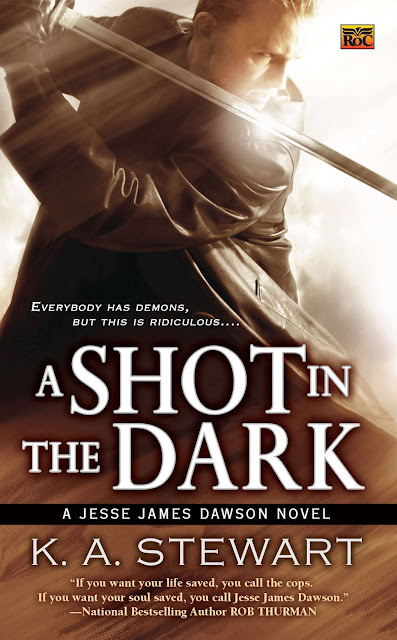 THE ENEMY OF HIS ENEMY

Jesse James Dawson is a Champion, putting his life on the line for those foolish enough to bargain with demons and fighting to save their souls. But even a Champion needs some downtime, so Jesse takes his annual camping trip to Colorado for some male bonding over friendly games of paintball.

Unfortunately, the fun and war games are interrupted by a pack of creatures summoned up from the very depths of hell by an entity Jesse prayed he'd never see again. With the lives of his friends and a teenager's soul on the line, Jesse's only hope may lie with an even more dangerous enemy--his personal demon, Axel...

Jesse James Dawson. Husband. Father. Badass. Champion. The one man you want in your corner if you happen to be stupid enough to sell your soul to a demon.

Demons are out there, even if you can’t see them. Ready to offer deals. To give you what you desire, for the measly price of... YOUR SOOOOOUL! And if you make the deal, you’re screwed. Literally, figuratively and any other kind of -ally you can think of. Go ahead and get a thesaurus; I’ll wait. *fools around on phone*

Ok. Appreciate how deep in it you are? Well, do not despair! Ok, do despair a little. But don’t lose all hope! Champions are here to save your sorry ass. A secret society of people devoted to help those desperate or stupid enough to sell their souls. Some sell their souls for cars, or money. Others do it to save sick sons or a dying mother. It doesn’t matter. If you sold your soul, the Champions will help you.

In comes Jesse. His story starts when his brother made a deal, and the only way Jesse can help him is to put his soul as collateral and fight the demon. If he wins, the demon loses claim on the soul. If he loses, both souls get taken and eternal damnation, hell, brimstone and torture.

You’ll love Jesse. I see him like the illegitimate son of Harry Dresden and Atticus O’Sullivan. I haven’t looked (and I won’t, damn it!) but I’m sure there’s some slash fiction out there for just such an encounter. I’m sorry I put that mental picture in your head... unless you like that sort of thing. In which case, you’re welcome.

The writing is great. Fast paced, funny, strong, emotional. The story and plot are what brings everything together. Demons are not behaving normally in this book, as if demon behavior is in any way normal, and it makes you wonder what’s going on. The author does a very good job of drawing it out, while giving you enough action and information both to make you care about the characters and to try and figure out what’s happening.

The cast of characters feels very real. They all play a part in helping you connect to the world, and to Jesse. Giving you glimpses into the life of the man, as well as the trials of the Champion. It’s also very interesting to see how his domestic life is affected by his responsibilities as Champion. Watching Jesse’s struggle to stay alive, solve the mysteries surrounding him and save the soul of someone who’s way over his head. It makes you wish you could jump in and help him, want to give him advice when you glimpse something and want to spare him some pain, or reach in and kill that stupid demon making his life hell.

Jesse’s wife is awesome and supportive (and a witch), and it was such a relief to know that I, as a reader, wouldn’t have to deal with family debacles and fights. Still, the worrying, the suffering, the fear of not knowing if Jesse’s coming back after a challenge is all very real. I care about all the characters (Even the demon Axel). That’s good writing right there.

Now that I’ve mentioned Axel, there’s no putting the demon back in the bottle. He’s a pretty cool character. Mysterious, powerful, creepy as hell (pun intended). He’s bound, for some reason, to take Jesse’s soul. He sometimes helps and sometimes hinders. He’s quite... well, quite weird. And in this second book, his creepy levels went up a few notches. I have some ideas of where that may be going, but I’m pretty sure it’s going to be totally different to what I’m expecting. But if I did guess right, I’m gonna be doing a little jig ‘case I love figuring this sort of thing out as much as I love being all flabbergasted and shocked. And this is a good series for it.

I really, really, really like these books. Can’t wait to jump back in with Jesse into book three, A Wolf at the Door, and find out what’s going on. The Demons seem to be going all ape-shit and ignoring the rules in this book, and it’s all about to burst in the Champions’ face. And you really don’t want gooey, demon blight running down your face. Ugh.


Go forth and buy your copy of A Shot in the Dark today!
Amazon | Barnes & Noble | Book Depository | Fishpond