Cover Reveal (Excerpt): Of Darkness and Crowns by Trisha Wolfe 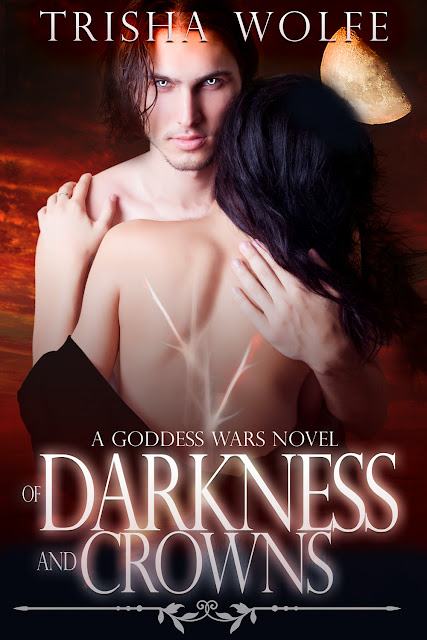 ***WARNING: MAJOR SPOILERS IF YOU HAVEN’T READ BOOK ONE***

The moon goddess has taken up residency within Prince Caben, darkening his mind and soul. Now he hunts the very women he sacrificed his life to save, his conflicting desires for love and power raging a battle within him. Kaliope possesses the key to setting Bale free, and Caben will stop at nothing to see his goddess restored. Even if that means destroying the kingdom he’s sworn to protect, and the infuriating woman who torments his thoughts.

Kaliope, now the leader to the newly formed Nactue Guard, has vowed to save Caben. But with a traitor lurking among her people, and powers she’s unable to fully control, Kaliope’s mission becomes shrouded with doubt. Her new role as watcher over Caben’s kingdom brings a burden she’s unable to bear alone, and appointing the right person in charge of the prince’s affairs has turned a kingdom against the Nactue leader. Saving her stubborn, willful prince from the darkness overtaking him will be the battle of her life, and she needs people she can trust by her side. But bad blood between members of the Nactue obscure Kaliope’s journey, while her feelings for Caben cloud her judgment.

When the time comes to do what she must to destroy the goddess of chaos, will she be able to if it means losing Caben forever?

Book two of the Goddess Wars is told in dual point of view from Kaliope and Caben. New Adult Dark Fantasy, intended for readers 17 years of age and older.

The Crusher grinds to a halt. I’m propelled forward, and my head smacks the low-hanging ceiling of the front compartment.

“Damn, you fool!” I palm my throbbing forehead, eyeing the driver of the Crusher—the machines I now call by their Otherworlder name.

“Sorry, my liege,” he says, backing against his seat, farther away from the glowing ribbons circling my fingers.

Ignoring him, I study the luminous white—like the surface of the moon—crawling beneath my skin, and marvel at the power. My power. Had I possessed it that day the Cavan Army forced me from my home, they never could have done so easily. But then, I never would have obtained this power. Ironic.

“Just drive,” I tell him. I take a seat on the front bench, away from the foul stench emanating from the back compartment—our diversion tactic that will gain me entry into my palace, where I know she’s being kept.

The glow beneath my skin illuminates brighter, reminding me of her skin. I curl my fingers into a tight ball.

The battle up ahead is only part of my plan, one that I know Kaliope will fall for. I need the reserves away from the palace. Then we’ll take care of her Nactue once we’re inside. My back molars clamp down hard at the thought of her—a mix of something like fire and nausea invading my stomach.

At one time, I felt things for the black-haired beauty. I chuckle to myself. Well, at least my groin did. Just thinking of her body makes me ache, and I have to adjust myself. But that was when I was weak, when I only thought and felt with that weakness. As much as I hated my father for thinking me too feeble to rule, he was right. I was pathetic.

Bale freed me. Released the part of me that I kept buried, locked away deep down, and I no longer fear anything. I think of everything that once made me shudder or quake with dread and laugh. It’s so simple.

Without fear, there is only freedom.

And if I free Bale completely, releasing her from within my being and making her corporeal, she’ll bestow me with even more power. I don’t care what the dark goddess does or where she goes once I restore Empress Iana’s relic. I don’t give a damn what happens to the maggoty Otherworlders or their realm.

I just want her out of my mind. And I want the power.

Then I’ll set my sights on Perinya, and on gaining what’s mine.

A deep cackle fills my head, deep and sultry.

“Quiet, woman.” I roll my eyes. We’ve come to a compromise, the goddess and I, that she may remain within my mind, but she’s to keep quiet. I got tired of her constant lectures and angry rants about her sisters. She does stay silent…for the most part. But the sooner I get her out of my head, the better.

Having a woman fill your thoughts is a weakness in itself. A sudden flash of a smiling, laughing Kal blurs my vision, and I shake my head.

There’s only one way to rid my thoughts of that woman.

“Burrow, leach,” I command the driver. “We’re coming up on the battle. Go underground.”

Tonight, I plot. Find a way into the capital of Perinya and into my home. And then take back what’s mine. The goddess can have what she wants. I’m only interested in claiming what’s mine.

No one will ever take anything away from me again.

I shake my head harder, trying to quiet the pesky thoughts that always spring up when I think of her. Something left over from before—a residual feeling, an effect she has on me.

It won’t be there much longer. I smile, and Bale laughs.

Check out Of Silver and Beasts (Goddess Wars #1)! 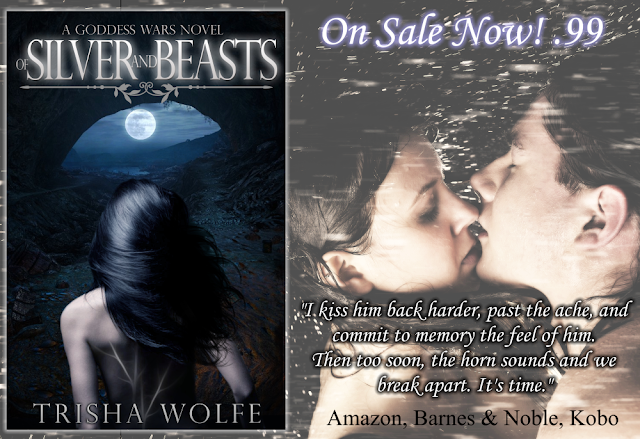 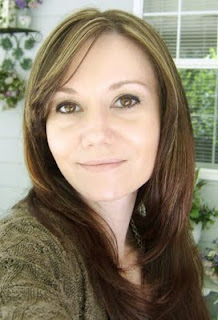