Blog Tour (Interview & Giveaway): Act Like You Love Me by Cindi Madsen 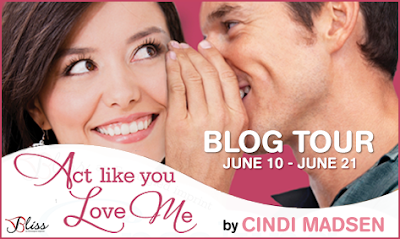 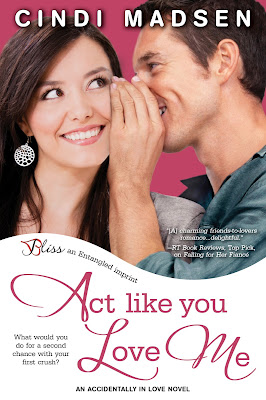 All’s fair in acting and amore...

Brynn McAdams isn’t the awkward drama geek she was in high school—she’s grown up and confident, or at least she likes to think so. But when her old crush, the impossibly handsome and impossibly unattainable Sawyer Raines, comes back to town to direct her community play, Brynn finds herself determined to be someone other than the girl he doesn’t even recognize. Good thing she’s an excellent actress.

After his bad breakup in NYC, the last thing Sawyer wants is to get involved with another actress. But the glamorous and beautiful Brynn draws him in, even though as her director, he knows she’s off-limits. There’s just something about the woman that feels…familiar. Like home.

As Brynn’s lies start to snowball, she struggles to stop acting and come clean. But what if Sawyer is already falling for the fake Brynn, not the Brynn she truly is?

Hi, Cindi! I’m so happy that I get to interview you here on my blog to promote the release of your new book, Act Like You Love Me! Since I like you so well, I’ll try to keep this as non-boring as possible. When we first met, I had a writing/humor sort of blog that faded out. What did you consider to be your first writing adventure?

Yay, I’m so happy, too! You were one of my very first twitter peeps! As for my first writing adventure, it was probably the first novel I wrote. It was about a girl who meets a movie star at a baseball game. She tumbles over the seats trying to catch a fly ball and lands in his lap. Now I can see all the errors in it, of course, but I’ll always love it because it was what got me addicted to writing.

So far, your published novels have been Young Adult, and the sweet, clean romances like Act Like You Love Me. What draws you to writing the clean reads?

I like focusing on the build up and the banter and the romantic chemistry. I want people to feel that more emotional side of falling in love. I want my readers yelling at my characters to kiss already! And hopefully, leave them smiling and feeling the butterflies when they do. And while there are plenty of steamy reads that have those things as well, I’m more comfortable writing the sweet and sexy reads, without writing the sex scenes. I want readers who are more comfortable with that heat level to still get a good romance with sizzling romantic chemistry.

I just don’t think it’s for me. Sometimes my characters go further in my head, and my readers are free to come up with their own scenes of how they think it should be, but I would have a hard time even writing one. I had a friend tell me I wrote good fight scenes and sex scenes were just fight scenes without clothes, so I should try it. Made me laugh, but I don’t think it’s quite the same. And if I ever did, I’d use a pen name so my family never found out. Just kidding. Kind of.

Enough with the awkward questions for now. Since asking you to compare characters of Act Like You Love Me to actors would be a normal question, which cartoon characters would you say looked or acted the most like them?

Ooh, interesting question. Brynn’s probably the most like Belle. She loves books and is a little different from everyone around her. Sawyer’s trickier. I guess I’ll say Fred from Scooby Doo. He’s got that all American charm and he’s smart. (But Sawyer dresses better. No neck scarfs for him. Lol)

If Brynn was a real person, do you think she would be the sort of person that you would hang out with? If so, what do you think your girls’ night would consist of?

I’d love to hang out with Brynn! We’d probably go to a play, or possibly catch a movie, like the Great Gatsby (which I still need to see) We’d laugh a lot, too, I’m sure.

One final question – what about being a part of the publishing world has made you the most proud?

Really it’s just that my stories are out there for people to read. For a long time, they were just sitting on my computer. And whenever I get an email or tweet from a reader, saying they liked my book, it totally makes my day.

Cindi is giving away a $25 Amazon gift card, a cute fish figurine, 2 e-copies of Falling for Her Fiance, 2 e-copies of All the Broken Pieces and 1 e-copy of Act Like You Love Me.

The fish figurine and gift card giveaway is US only but e-book giveaways are international.
a Rafflecopter giveaway