Join Marty Weiss, author of the thriller novel, The Alchemist Agenda, as he tours the blogosphere July 1 - September 27, 2013 on his first virtual book tour with Pump Up Your Book! 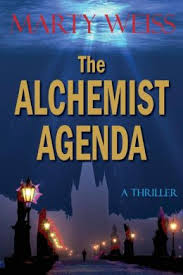 When Charlie Rocklin and his company Gold Diggers Exploration set out to recover a 17th century shipwreck, they discover an undocumented Nazi submarine with enigmatic symbols. Ariel Ellis, a femme fatale historian with a mysterious past, proves that the U-boat contains the key to a formula more valuable than any sunken treasure, and more deadly than any weapon that has ever existed. In this globetrotting international adventure, Charlie and Ariel uncover an accelerating tempest of secrecy, lies, and agendas, fighting not only for the truth, but for their lives. Weiss's debut novel is a lightning-paced story with surprises at every turn, and shows us that our personal legends may be more real than we ever could have imagined.

Just as Charlie turned off the shower, he heard the fall on the stairs, even though his bathroom door had been closed and his office was set apart from the others. Then everything went silent, unusually so. He haphazardly dried, quickly put on his street clothes, made sure he stuffed his wallet and his black book in his back pockets, the two personal effects he only left behind when he was training, and then secured the necklace with the crest around his neck, now the third item he would no longer leave without.

He peered out into the hallway.

It was too quiet. Something was not right.

He walked into the lower level offices. Nothing out of place. Then he looked behind a table and saw:

Horrified, he moved through the offices, searching every turn and crevice until he approached the staircase where the oceanographer’s body was sprawled on the steps.

Charlie shifted into stealth survival mode, quietly made his way to one of the gear lockers, grabbed a dive knife, and crept to the next room.

Wade and Luke hunted maniacally through the banks of computers and equipment. But it was Ray who found the U-2008 bell up in Charlie’s office, and moments later, the locked case beside the desk. He smiled instantly because he had worked for a custom locksmith all through high school, a job he had loved because it taught him how to crack similar safe designs built to keep children from their parent’s firearms. It didn’t take him sixty seconds to open this lock.

The Shackers’ orders were specific. They were told to find a nautical GPS and not to come back without it.

And there it was.

Ray moved into the computer room where Luke and Wade were searching and excitedly waved the nautical GPS. “I got it!”

Luke grabbed the device and looked it over. “You’re shitting me.”

“Let me see.” Wade tossed aside a computer he was searching through and went to join the other two, but a voice stopped him.

The three Shackers turned to see Charlie pointing an air-powered speargun. “Set it down on the table and drop your guns.”

Wade almost laughed. He had been jumped, fired at, and held up by insurgents with much more firepower, and hatred. He wasn’t about to allow this freakin’ frogman get in his way. As Luke and Ray dropped their weapons, Wade drew and fired.

Charlie dove for cover behind the shelving unit and crawled into the gear room to hide behind a rack of wet suits.

Ray grabbed the bell and the GPS from Wade and packed them into the empty pack he had strapped over his shoulder.

“Orders were to leave nobody alive,” Wade objected. “Move it.”

Wade and Luke stormed into the gear room with their guns poised; Ray took his time, but trailed right behind.

They saw no one, but heard Charlie’s voice: “What the hell do you want?”

Wade put his finger to his lips so that Luke and Wade wouldn’t open their traps, then stalked slowly toward the direction of the voice. “Same thing as you.”

There was a long silence as Wade searched behind the racks of wetsuits, and then Charlie dropped down from the storage shelves, knocked the gun out of Wade’s hand and slammed him to the floor.

Wade loved close combat—it was his forté—but Charlie didn’t give him the chance to show it. He dropped a heavy steel dive tank on Wade’s face, breaking his nose on impact and knocking him unconscious.

Luke and Ray couldn’t fire their guns with Wade so close, so they charged Charlie. He met them with a rapid flurry, shoving his elbow into Ray’s gut and an upper cut into Luke’s chin, and then he tucked and rolled as Luke’s gun fired, a shot that hit the back wall. Charlie reached for a dive knife, sprung to his feet and threw it. It flew past Ray’s ear. Charlie took cover on the floor and crawled toward an exit as Ray popped off more shots.

Charlie burst outside into the alley. Someone was already there. Through the sun in his eyes he could only make out a silhouetted figure approaching…

It was Wade, his face covered in blood from the dive tank, his gun in his hand.

There was nothing to duck behind. Everything went still.

And then came a shot.

When Charlie realized he hadn’t been hit, he turned and saw Ariel leaning on the hood of her car, just-fired gun in hand.

Wade collapsed on the alley pavement, a bullet through his heart. He barely had a moment to realize that this was his final battle, or to agonize over the possibility that his father would learn that he had been brought down by a woman, his final humiliation.

“I told you there wouldn’t be much time,” she said. “We have to get out of here!”

The exit door swung open, but before Ray and Luke could scope the perimeter, Ariel fired one more shot, which hit the steel door, and forced them back inside.

“Gimme your keys.” Charlie approached with an open hand. “They’ll try to leave through the front entrance. We’ll cut them off—”

Ariel closed the keys in her fist and gestured to the passenger seat. “There’s a lot more than those two to worry about. Get in.”

Charlie got inside the car, weighing his options, trying to think like a diver, remaining calm and breathing steadily as Ariel sped the car out of the alley.

“They got the nautical GPS,” Charlie said. “They can find the site.”

“You still have the crest?”

Charlie held the necklace under his shirt. “Yeah.”

“And you can find the sub without the GPS, right?”

A car tore out of another alley in front of them. Ariel skillfully maneuvered and skid, missing them by inches, then took off in the other direction.

The other car spun around and came after them. Ray was driving. Luke was riding shotgun as he fired a few useless rounds.

“Drive straight, would you?” Luke ordered.

“Your aim is for shit,” was all Ray could come back with.

The chase sent them weaving through the office park and into a residential area. Ariel remained cool as a cucumber as she turned onto a lawn and through several backyards, like an obstacle course she knew well. She picked up their conversation where she left off, just like she did with her bi-weekly lectures: “Just because they can get to the U-boat doesn’t mean they can get inside. The key isn’t easy to find and it’s not in America.”

“I’ll explain everything, as long as we’re partners in this.” She turned onto another street, and then glanced back to be sure she’d lost their pursuers. “Are we partners?”

“I haven’t had the best luck with partners.”

“Maybe you should move on to something else then. Without the key, you’ll never get inside.”

“I don’t give up until I have all the answers.”

She knew she had him; he knew he didn’t have a choice. “Where are we going?” he asked.

She turned onto the entrance ramp to the Turnpike. “Prague.”

“Just like that, without any tickets, passports, or luggage?”

She stepped on the gas and headed for John F. Kennedy International Airport.

Marty Weiss was born and raised in Chicago and decided that he wanted to make movies after spending a summer working on the set of John Hughes' movie "Sixteen Candles." After earning a B.S. in Journalism from the University of Illinois, Champaign-Urbana, and an M.F.A. in film and television from New York University, he directed national and international TV commercials for major Blue Chip brands as well as TV movies. He helmed his first feature film, "Vampires: The Turning," for Sony/Screen Gems Entertainment - an action/horror movie that evolved out of John Carpenter's "Vampires." It was filmed in Chiang Mai, Thailand and released worldwide in 2005. Weiss has filmed throughout North and South America, Eastern and Western Europe, and Southeast Asia, and has garnered numerous industry awards. His screen adaption of his debut novel, "The Alchemist Agenda," was the honored with the Best Screenplay award from Amazon Studios and is currently on their development slate for production. Weiss lives in Los Angeles with his wife Elisabeth and children Jasmine and Jake.

Visit his blog at http://www.martinishotfilms.tv

Friday, July 5 - 1st chapter reveal at Mom with a Kindle

Tuesday, July 9 - Book featured at Tales of a Book Addict