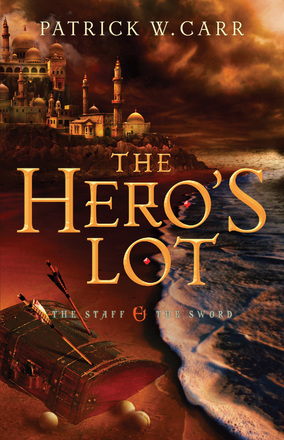 When Sarin Valon, the corrupt secondus of the conclave, flees Erinon and the kingdom, Errol Stone believes his troubles have at last ended. But other forces bent on the destruction of the kingdom remain and conspire to accuse Errol and his friends of a conspiracy to usurp the throne.

In a bid to keep the three of them from the axe, Archbenefice Canon sends Martin and Luis to Errol's home village, Callowford, to discover what makes him so important to the kingdom. But Errol is also accused of consorting with spirits. Convicted, his punishment is a journey to the enemy kingdom of Merakh, where he must find Sarin Valon, and kill him. To enforce their sentence, Errol is placed under a compulsion, and he is driven to accomplish his task or die resisting.

Sweat covered Martin as if he were some wastrel seeking absolution. Perhaps in a sense he was. Dispatched five years ago to find Illustra’s heir, the archbenefice’s instructions had been simple in imperative: Find the king; let no one find out.

Yet someone had found out and though the accusation had come primarily against Errol, Dane had hit close enough to the mark to endanger not only Martin and Luis, but the archbenefice and the primus as well. He wiped his hands on his cassock and lifted a blunt fist to announce himself on the thick oak planks of Enoch Sten’s door. The entrance to the primus’—the head of the conclave’s—private quarters bore mute testimony to the longevity of the office. Untold fists and knuckles had worn the finish where he pounded his presence to a deep honey color that contrasted to the age-darkened hue of the rest of the door. Luis, newly elevated to secondus of the conclave, stood at his side. The reader’s manner betrayed no hint of nerves. Then again, Luis had less to lose. Martin reflected on that for a moment and then amended the thought. No, if the wrong people discovered their purpose, they would all die, killed by the very people they sought to protect.

The door opened to reveal the primus’ secretary, a short waddle-throated man. Willet. Martin forced his mouth open in imitation of a smile. “Good morning, Willet. Is the primus in?”

Like any secretary, Willet guarded his employer’s prestige. “A moment,” he said with a half-bow. “I will see if he is up to receiving guests.”

A moment later, Sten appeared at the door, shooing the guardian of his image out as he beckoned Martin and Luis in to his apartments. “I will see you tomorrow, Willet.”

Martin inclined his head, respectful as Sten closed and bolted the door. “Will the archbenefice be joining us, Primus?” Sten shook his head. “No. Bertrand considers the risk too great as do I. You will both have to leave the island of course.” He sighed. “We can’t risk Dane calling you to testify. I’m sorry, Martin. It means you’ll no longer be entitled to the red of the judica.”

He waved a hand to say it was unimportant, but a stab of loss struck him even so. “It’s not unexpected, Primus. “You’ll watch after the pair of them won’t you, Liam and Errol?”

Sten nodded. “They are too valuable to lose. Bertrand will think of something. And Errol is innocent is he not? He didn’t help with the cast, did he?”

Luis shook his head. “No, but it hardly matters. The boy is clever, he figured out what Martin and I were doing weeks ago. If Dane examines him, the truth will come out.”

Sten blew air through his the white wisps of his mustache. “Worse and worse. Will you cast for your destination?”

Luis gave a shy smile, the skin around his brown eyes crinkling. “I already have. It didn’t take any great wit to see we had to leave. We’re going back to Callowford. There was no time to cast in stone of course, but for this, wood suffices. Errol and Liam’s village came up seventeen times out of twenty.”

Enoch Sten grunted. “I can’t say I’m surprised. It only makes sense after all.” He paced the room. His old-man’s feet shuffled across the carpet in slippers. “Now if only we could determine what makes Errol so blasted important.”

The Hero's Lot is the sequel to A Cast of Stones 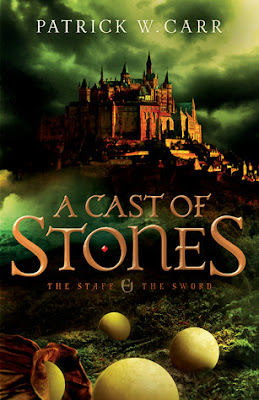 A Cast of Stones (The Staff and the Sword #1)


$25 Amazon Gift Card or Paypal Cash
International
Ends at 12:01am EST on August 15th
a Rafflecopter giveaway Open only to those who can legally enter, receive and use an Amazon.com Gift Code or Paypal Cash. Winning Entry will be verified prior to prize being awarded. No purchase necessary. You must be 18 or older to enter or have your parent enter for you. The winner will be chosen by rafflecopter and announced here as well as emailed and will have 48 hours to respond or a new winner will be chosen. This giveaway is in no way associated with Facebook, Twitter, Rafflecopter or any other entity unless otherwise specified. The number of eligible entries received determines the odds of winning. Giveaway was organized by Kathy from I Am A Reader, Not A Writer and sponsored by the author.

Labels: Blog Tour, Excerpt, Fantasy, Giveaway, I Am A Reader Not A Writer, Patrick W Carr, The Heros Lot
Email ThisBlogThis!Share to TwitterShare to FacebookShare to Pinterest