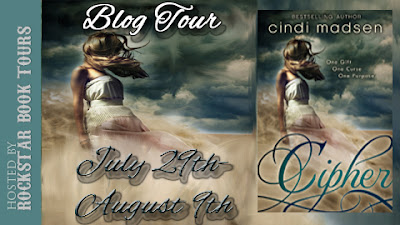 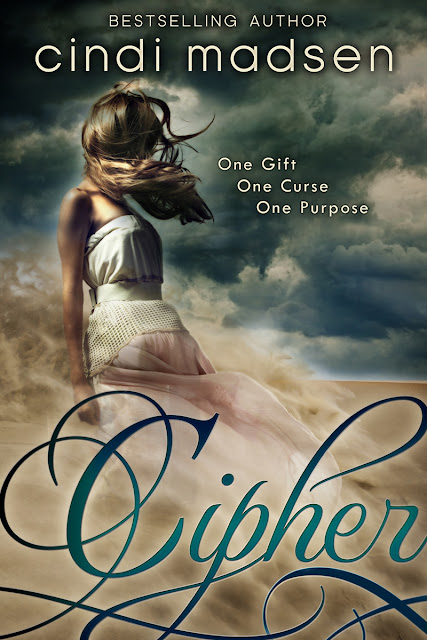 Summer Davis sees deaths before they happen. She attempts to live a normal life by focusing on the dance team and her quarterback boyfriend. But then the way-too-cheery Angel of Death shows up and tells her she’s a Cipher—a person chosen to help people who are going to die resolve problems with their loved ones. Ashlyn Moore, one of Summer’s classmates, is going to die, and she needs Summer’s help before that happens.

It’s nearly impossible to get through to Ashlyn, who surrounds herself with chess nerds and geeks and makes it clear she doesn’t want to be friends. Desperate to complete her Cipher task before it’s too late, Summer turns to Troy, the guy who’s always been there for her and one of the few people she can trust. With his help, she makes progress. In fact, the closer she gets to Ashlyn and her friends, the more she feels like she’s finally found where she belongs.

As the clock starts running down on Ashlyn’s life, Summer decides to change her objective. She’s going to save her new friend before it’s too late—even if it means messing with fate.

Although I adore Cindi Madsen as a person, this is only the second book that I've read of hers. I generally try not to read authors that I was acquainted with before they were published in case I don't like their books. (I still buy them all.) It's tricky territory, especially as a blogger/reviewer, but I should not have worried. Cipher was just as good as her other book, and I can now pursue reading all of her other books without any hesitation at all.

Madsen's characters in Cipher were really great to read. Summer was the main character in the novel, but all of them were well-constructed and realistic. Each one had a distinct personality, and I was even able to relate to the behavior and feelings of the "mean" characters. Summer, the main character, had a lot to deal with, being able to see people's upcoming deaths. Instead of being a broken mess that is common in many young adult novels, she finds an outlet for her problems and feelings by dancing. This lands her in the popular crowd, with a lot of friends and a hot boyfriend. The cool thing about Summer is that it did not turn her into a snotty bitch, and she had no trouble working her way into "the Rejects" trust. She was a sweet girl, and those are the best kinds of points of view to read from.

Before I started reading Cipher, I looked up the word to see if there were any kind of mythological history behind the name/word. It seems like it is something of Madsen's creation, though a bit of a mix between psychic and banshee without being either. I also liked the way the Angel of Death idea was integrated into the novel. Gabriella was a hoot, and I'm thinking about going out to buy me a pink tutu. (Okay, that's neither here nor there.) Being introduced to something new when it comes to the paranormal is unsettling to me because I had such an obsession with all things fairy tale and mythological as a kid, but again, I had nothing to worry about. Everything was explained in a way that made sense to me in the book, and I wasn't ever hungering for information.

The only issue I had with the novel, albeit a small one, was that it read more like a contemporary novel when I was expecting more of a paranormal aspect. The synopsis should have told me as much, but the whole Angel of Death and helping people who are about to die parts of it made me think less than realistic things were going to happen. And they did, but the majority of the novel was focused on Summer come to terms with who she really was and understand who her true friends were. Oh, and I also teared up a little. I never like that. ;-)

All in all, Cipher was a very enjoyable novel, and I think any reader who enjoys realistic novels with just a little dip of the toe in paranormal will love it. Fans of Cindi Madsen will also love the book as it has her fantastic sense of humor throughout. I'm not a big music fan (I only listen to audiobooks anymore), but I think anyone who has a great love of music will enjoy the story, too, as it is a major plot device in the novel. Cipher, again, was a really good book, and I think it has something in it for nearly everyone.

a Rafflecopter giveaway
To satisfy FTC guidelines, I am disclosing that I received copy of this novel through Rockstar Book Tours in exchange for an honest review. The book was likely provided to the tour by the author, which has in no way affected the outcome of my review. All opinions expressed are rambling, honest, and completely my own.