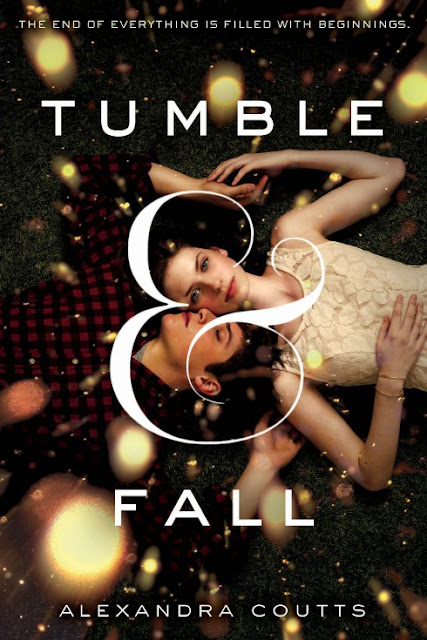 A novel about the end of days full of surprising beginnings

Alexandra Coutts' TUMBLE & FALL is a powerful story of courage, love, and hope at the end of the world.

In Alexandra Coutts' debut novel,Tumble & Fall, the story is told in alternating points of view of three teenagers: Sienna, who was just checked out of rehab by her dad; Zan, who is still mourning the death of her boyfriend from ten months previous to the story; and Caden, who was brought up on the wrong side of the tracks and is starting to drift into the wrong crowd. There is also a host of secondary characters that I enjoyed just as much as the leads because of their complexities, and they were also necessary for the development and growth of Sienna, Zan, and Caden. Oh, and there's an asteroid in the background that everyone is waiting to hit the planet, but Tumble & Fall isn't really an apocalyptic or science fiction book. You aren't going to see rioting, cults, or Bruce Willis riding a nuclear warhead into the sunset (which is referred to many times in the book). The world had been essentially given six months to live. Humanity was aware of the asteroid Persephone's impending collide with the planet, and those six months were wrapping up during the timeframe of the novel. There was no expected "last hurrah" from any of the world's governments. The diagnosis for everyone is terminal, and it's almost time for them to die. How in the world I did not expect, even for a moment, before reading this book that I wasn't going to cry is beyond me. This is mostly a contemporary novel - with an asteroid. You may have trouble suspending belief about the lack of full-scale rioting and looting, but I think everyone has pretty much accepted what's coming.

Staying on track, the book is mainly about the characters and the journeys they take as they prepare for the end. Sienna is trying to come to terms with how her illness affects her everyday life, how much she is like her dead mother, her father's new romance with Denny, and falling in love with Owen out of nowhere. (Really, it's out of nowhere. Yes, I'll grant them that the world is ending, but two or three days is a bit ridiculous.) She is probably my favorite character in Tumble & Fall because of how self-aware she is. My heart breaks for her because of her illness and that she had to carry so much weight. Zan is a bit less likeable for me. She finds a girl's phone number in her dead boyfriend Leo's book that he was reading when he died, and she decides she is going to track the girl down. Zan also drags along Leo's best friend, Nick, for the ride. While her determination to find Vanessa is applaudable, I was still shaking my head at her. If her love and trust of Leo was so complete, she should have left things alone. However, that wouldn't have made for a very good story. Finally there's Caden who is kidnapped by his long-lost father within the first few pages of the book. His dad is what you would get if you combine Richie Rich with a mob boss. Caden's journey consists of him learning family secrets and deciding what family really means to him.

In the end, Tumble & Fall is just a book about family, finding yourself, and going through the stages of grieving. I enjoyed it a lot since it's made pretty clear in the beginning of the story that this isn't about people getting rescued - it's about going home and saying goodbye. If you are able to connect to any of the characters in the book, I can almost guarantee that you will tear up. I know I was quietly sobbing in the breakroom at work.