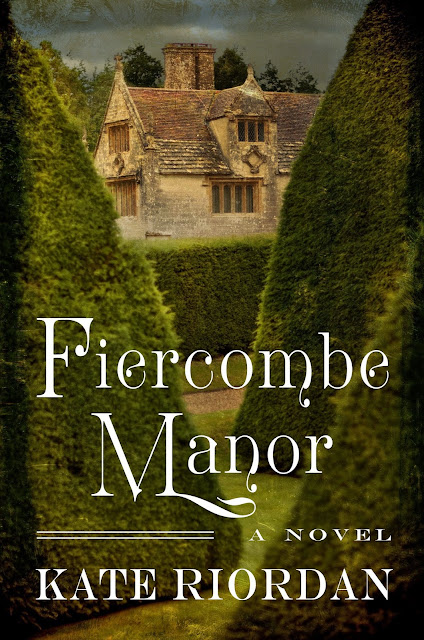 Fiercombe Manor is a haunting and atmospheric novel that tells the tales of women in two different eras – the 1890’s and 1930’s – and how their lives seem to be entwined by fate. Kate Riordan’s novel is a beautifully dark and beguiling tale which will sweep you away. It will appeal to fans of Kate Morton and Daphne Du Maurier's Rebecca.

In the summer of 1933, Alice Eveleigh has arrived at Fiercombe Manor in disgrace. The beautiful house becomes her sanctuary, a place to hide her shame from society in the care of the housekeeper, Mrs Jelphs. But the manor also becomes a place of suspicion, one of secrecy.

There are secrets that the manor house seems determined to keep. Tragedy haunts the empty rooms and foreboding hangs heavy in the stifling heat. Traces of the previous occupant, Elizabeth Stanton, are everywhere and soon Alice discovers Elizabeth's life eerily mirrors the path she herself is on.

I started reading Fiercombe Manor thinking it was going to be a gothic period book like one of the Brontë sisters' books or Daughne Du Marier's Rebecca. There were some definite creepy and mysterious happenings in the old house, but I felt mostly the book was a commentary on women's plight in the later 1800s and early 1900s.

Fiercombe Manor switches narration between 22 year old Alice in 1932 England and Lady Elizabeth Stanton 1898. After a mistake leaving her pregnant and unmarried, Alice's parents ship her off to Fiercombe Manor in Gloucerstershire to an old friend to have the baby in secret. We also see the Manor from Elizabeth's point of view 30 years earlier, when Elizabeth is stuck in a miserable marriage. Elizabeth's husband, Edward, brought his new bride to his monstrous, newly built house in Gloucerstershire, refusing to inhabit the old Manor. By the time Alice arrives in Gloucerstershire, the new house is no where to be seen and there's a mystery surrounding the disappearance of Elizabeth and her young daughter.

The novel runs a little long at right at 400 pages, and I really wasn't sucked in until around 100 pages or so. For me, this was probably because I didn't like Alice at first. Her awful situation is caused by her extreme naiveté, but instead of being endearing, Alice annoyed me. She was too proud and acted too above other women at first, and she didn't show any remorse for being the other woman. Elizabeth was a much more sympathetic character, and I enjoyed her parts more, especially in the beginning. I gradually warmed to Alice as she showed more spunk and I realized she was more down-to-earth than I thought.

Elizabeth has a young daughter with Edward, but there is strain in their marriage because Elizabeth hasn't produced a boy heir. There's also some mysterious illness that Elizabeth suffered after her first child and some points in time that Elizabeth can't quite remember. Elizabeth has also suffered through a least one miscarriage. Add to the fact that in Alice's time, Edward's brother has inherited Fiercombe Manor with no mention of Elizabeth or her daughter, and Elizabeth's life doesn't seem to have a happy ending.

There were so many questions about Elizabeth and her daughter, and the novel really handles the mystery aspect well. What did Elizabeth do that she can't remember? What's going on with the glass house? Why did Edward's brother inherit instead of his own children? Does Elizabeth have another child? The answers are gradually given to the reader, and even at the very end, I thought I knew kind of what happened, but was still a little surprised at the end to Elizabeth's and even Alice's story. There's also a little bit of a Rebecca type mystery with Mrs. Jelphs, who was Elizabeth's maid and is the housekeeper at Fiercombe Manor in Alice's time.

After the birth of her first child, Elizabeth seemingly suffers from postpartum depression. Instead of finding a legitimate doctor and trying to help Elizabeth, Edward alienates his wife and makes the situation much worse. I won't spoil anything else, but he's a pretty despicable person in my mind. It's infuriating how much control men used to have over their wives' lives, and how women could be put through hell and into asylums for no reason. It's also scary that in the 1930s it was still the ruination of a woman for having a child out of wedlock and only the woman suffered any consequences in extra-marital affairs.

Fiercombe Manor is a good historical fiction novel, especially more of an issue-based historical novel, than the atmospheric and gothic novel I was expecting.

Kate Riordan is a British writer and journalist who worked for the Guardian and Time Out London. She is also the author of Birdcage Walk and is already at work on her third novel. Born in London, she now lives in the Gloucestershire countryside.

Thursday, March 19th
For the Love of Words