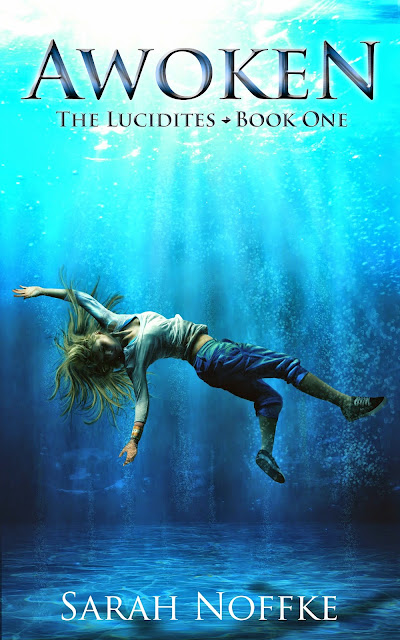 Around the world humans are hallucinating after sleepless nights.

In a sterile, underground institute the forecasters keep reporting the same events.

And in the backwoods of Texas, a sixteen-year-old girl is about to be caught up in a fierce, ethereal battle.

Meet Roya Stark. She drowns every night in her dreams, spends her hours reading classic literature to avoid her family’s ridicule, and is prone to premonitions—which are becoming more frequent. And now her dreams are filled with strangers offering to reveal what she has always wanted to know: Who is she? That’s the question that haunts her, and she's about to find out. But will Roya live to regret learning the truth?

Even though Awoken is a dream traveling book, a lot of it seemed like a time travel book. Especially, since the dream travelers could travel back in time during their dreams. I did think that the combination of dream traveling with other powers such as mind reading or being able to see a few seconds in the future was a unique premise.

For the majority of the book, Roya was an extraordinarily unlikeable character. She was standoffish and unwilling to cooperate or interact with her fellow teammates. Granted, she had a pretty awful childhood and the Lucidites were alternatively vague, infuriating and manipulative. I also never really understood why she was the one picked as the Challenger. Nothing in her powers actually contributed to the ending.

Roya has just discovered that she is a dream traveler, and also that she might be the only person that can take on an evil dream traveler, Zhuang. The dream traveler society sets up a series of tests to determine the Challenger and the team to help her.

The rest of the supporting characters were pretty interesting, and I loved learning about everyone's powers. The parts I liked most involved the tests to become the challenger and the training of the team for the day of the challenge.

Although there is a definite over focus on the whole one person destined to save the world plot, there were several plot twists that I didn't see coming . However, the ending felt realy rushed; I was surprised when the team went into fight Zhuang. They didn't seem like they had been training for long enough or were quite prepared.

I REALLY did not like the love triangle, but I hardly ever do. I also disliked this one because neither love interests were very well developed. Also, we never really learn how old Aiden is, but it seems like he might be as old as Roya's parents which is really creepy. The romance with George felt like it came out of no where.

The book ends with some loose ends, but there is no cliffhanger, just a lot of unanswered questions. I feel like there is something shady going on with Trey and the backstory with Roya's mother.

If you want a different take on the YA paranormal genre, or you like time travel and want a little twist, then you should check out Awoken.

Don't forget to check out the interview with Sarah Noffke and enter the giveaway of Awoken before March 20th!