Today, we have the lady half of the writing duo behind the Vengeance urban fantasy series - Raven Bower! She came to talk to us about werewolves, writing with another author, and more! We're all in for a treat.

Raven and Lain Bower are a wife and husband team. They live in North West Michigan with their four kids, two Hell Hounds and alien doom cat. When not occupied with the aforementioned minions or writing, they enjoy creating worlds, gaming, reading, target shooting and gardening.

Raven is the author of the Bailey Khane supernatural suspense series - Apparitions, Wendigo and Rags Beneath (spring 2012). Apparitions, is currently under production as a feature film.

The first novel in their Weeping Dark fantasy series, Bleeding Edge, is set for release in late 2012, early 2013.

And the romantic adventure fantasy, Nymph's Lair, out this summer/fall!

Raven, thank you so much for taking the time to answer questions for us at Bibliophilia, Please. Your new book Primal released last month – can you tell us a little bit about it in your own words?

Primal is a saucy, gritty urban fantasy with a strong romance line between a brutal werewolf and a modern druid.

What do you think sets Primal about from other urban fantasy and werewolf novels?

While writing your book, what sort of research did you do? Did you go back and read old werewolf lore, or did you build an entirely new world and set of rules of your own?

Oh great question! We read through old werewolf lore and looked at mutations of the werewolf mythos, plus a good look at our 'real world' wolves and how packs operate. Then we created our own mutation using what we thought were the most realistic and logical traits and society.

Your characters in Primal have very interesting names (Wrey and Arvon). How did you come up with the names of those characters and the others in the book?

Arvon is the name of the highest mountain in Michigan (Mt. Arvon), situated in the Upper Penninsula. Love that area! If I could live anywhere in the world it'd be along the shores of Lake Superior.

Wrey came to me as herself, complete with name, all I had to do was ask it.

How long did it take you to bring Primal into the world, from first imagining to publication?

Hm...I'd say about three months to create the world, the characters and write it in rough draft. Three months to revise, edit and polish. Then it was in submission stage for what seemed like forever. We got a total of oh, I think somewhere between 5-7 contract offers on it and went with Hydra because their contract was very author friendly.

What is it like to partner with your spouse, Lain, on your writing projects? Does one of you take over a specific aspect of the novel, or do you just pass each part back and forth?

It's great and sometimes frustrating, just like it is working with others in any other sort of job. Usually, I write the outline and Lain approves or tweaks it. Then I write the rough draft and then Lain goes through and does his magic to it. Sometimes Lain has characters that he runs himself - like Mako in Primal, in which case he writes the rough of those viewpoints and I work magic on them. Other times he doesn't have a set character(s) that he works with - depending.

I'm the emotional end and he writes a lot of the fight scenes - he's so much better with it!

Apparitions, one of your other series, had been purchased by a production company. How was writing the screenplay for the movie different from writing the novel itself?

Oh goodness! So different! But writing a script made me a better novelist because you learn to recognize the core of the story and stick to it. In a novel, you have a good 300-500 pages to write out your story, plus you can get into the heads of your characters. So a novelist can - and they often do - dilly-dally with things that might not necessarily affect or mesh with the main story.

Finally, do you have any upcoming projects that you can tell us about?

We have many exciting projects coming up! Our first epic fantasy series - Weeping Dark: Bleeding Edge will be released in late 2012/early 2013. Rags Beneath - the final novel in the Apparitions series will be released in September 2012, along with a fantasy adventure novella, Nymph's Lair.

Right now, for Works in Progress - we're working on a fantasy novel that takes place directly after Nymph's Lair, using many of the same characters. Plus, two other scripts - one a creepy, moody period piece requested specifically by a director and another inspirational script based off real life events. Then on to Smoke - book two of the Vengeance series (Primal).

Lots of things going on over here!

Raven, thank you so much for the great interview! I wish you and Lain the very best of luck, and I hope you will stop back by again!

To find out more about Raven and Lain, you may visit their Website, email Raven or join their Inner Circle newsletter for exclusive content at their Blog. 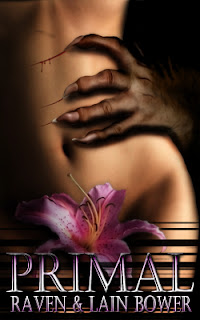 Pursued by a ruthless crime lord after witnessing the murder of an FBI agent, Wrey must rebuild the life they stole from her. When she meets mysterious Arvon Night, her precious new life unravels as she’s thrust into a web of betrayal, lust and violence.
Arvon knows he must slay Wrey to keep his secret safe from those who hunt him. Each hour his enemies stalk closer, ready to kill.

Can Wrey’s powers of nature and spirit help her survive the yearning and dangerous Arvon and the tide of peril he brings with him? Or will an opportunistic hitman take advantage of them both?