Books That Changed Me 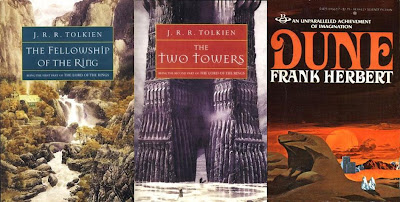 Sometimes I look back at my teenage self, and it makes me want to slap the back of my younger self’s head. I’m sure you get that feeling too, 'cause if you don't then I’m a weirdo. Not that I’m not weird in other aspects... but I digress.

The reason for this is that I used to hate reading. Oh, I can hear gasps! Yeah. Basically, I sucked. My most disliked subjects in school were – first up – Math, because math is evil *whisperandIgotreallybadgradeswhisper*. Evil! They should make you do fractions and calculus and all that crap instead of waterboarding and pliers and probes... but I digress. Another one was Spanish (Spanish is my native language, olé!) because it meant reading books. I used to not even try to read them and got constant Fs and Ds on book tests. Not only did I suck because I didn't like to read, but I also was kinda stupid. All that changed one time when I was walking down the street, and I saw The Fellowship of the Ring for 4 bucks. For some reason, I had to have it. My family wasn't in the best of economic conditions, and 4 bucks meant something even if now it doesn't, but I had to get it. So I did. And it changed my life. I read it in one day, and when I finished, I read it again. I was hooked.

Hobbits, elves, rangers, GANDALF! OHMYGODGANDALFISSOAWESOME! Jejeje. There was no going back. I didn’t have the money to get any more books, so I kept rereading The Fellowship on and off until I could get The Two Towers. Fantasy made me its willing servant. No going back for me. And then I found Sci-fi.

Dune was another big change in my life. In part because of the writing and story, which are awesome, but mainly because of Mentats. It actually changed the way I thought and faced life. Dune's Mentats made me think (not something I had very much practice at) before I acted, before I spoke. They taught me to not over think also, which is as important if not more.

Books were an escape for me during troubled times. A window that let me look at other worlds, filled with magic, creatures, sword fights, world shattering, and world saving. When you’re having a bad time, a book can rescue you for a time. Make you feel better. Make you smile. Even when you’re having a good time in your life, a good book just makes it better. Fire up your imagination and help a PI wizard to battle the Red Court of vampires, pick up your sword and go escort a caravan across continents, engage your cruiser’s impeller drive and go save the empire. Anything. Everything. Books are amazing things.

As for many of you, books changed my life. And it got me to thinking, how did books affect other people’s lives. How about you, fellow reader? Which book changed you and how?

Labels: Dune, Favorite, Frank Herbert, J R R Tolkien, The Lord of the Rings, Will
Email ThisBlogThis!Share to TwitterShare to FacebookShare to Pinterest