Character Building Before Page One

As many of you, I’ve grown used to main characters in books to go through a growing period from beginning to end in a book or series. But recently I grew tired of it. I’m tired of the evil, all powerful arch nemesis being defeated, again (!!), by an underdeveloped hero – a hero just growing into his powers, finding his destiny, and stumbling unwillingly into the path of his fate. Meh.

I grew tired of the stupid choices characters made in these types of books. Oh, you have an awesome power? How about taking the time to master it BEFORE the shit hits the fan? No? But why? It makes SO much sense! Oh, I get it. Teenage angst. Oh for all the gods, I’m getting annoyed just thinking about it.

Whatever happened to prepared people?! Whatever happened to some properly grown up man who, when Armageddon came a knocking, puts on his double shoulder holster and starts kicking ass, and to hell with taking names. Taking names is for people with paper pads and proper handwriting. After all that world saving, those notes can be hard to read, what with all the blood. 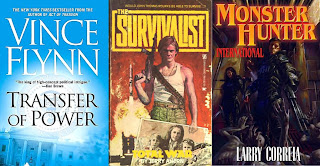 I want someone like Mitch Rapp. A tough counterterrorist operative that through the series saves the country again and again, mostly singlehandedly, against the rules and desk-jockeys telling him how to best kick someone in the face. Mr. Rapp has the kicking people in the face down pat, by the way. (Mitch Rapp series is written by Vince Flynn.)

I even want someone like John Rourke. When the nuclear holocaust hits and the plane he’s in is going down, John Rourke takes over, lands it, goes to look for help, and in the process takes down a motorcycle gang – all while looking for his family, totally in control, while traveling across gang infested, Russian occupied America. He’s ruggedly good looking, a survival expert, deadly with guns, fists, knees, and can rock your world in the sack. (Not my world... but then again, he is pretty damn cool... Nah... Well...). All this and his hair doesn’t even get out of place. (The Survivalist series is written by Jerry Ahern.)

Or let’s go urban fantasy here and look at Owen Zastava Pitt. He is a regular vanilla accountant who is attacked by his werewolf boss! What does he do? He kills the were-boss barehanded. That’s the kind of accountant I want doing my taxes! It helps that he’s built like a man-shaped mountain and had underground fighting experience. But dude, a werewolf. Alone and weaponless. That dude kicks ass. Everyone in MHI does really. Great zombie-werewolf-vampire-ancient evil series. (Monster Hunter International series is by Larry Correia.)

There will always be room in my heart for books where the main character has to grow up before facing the challenge of his life. After a cleansing period, ‘cause now I’d roll my eyes so hard my head would fall to the side. But now I’m on a kick of just total, proper, unadulterated face punching. Let the growing and training happen before page one. I wants me some whoopass! How about you?