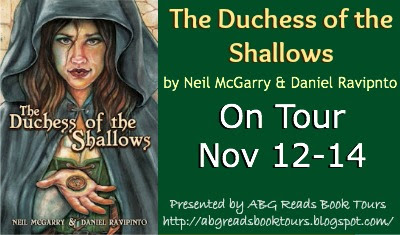 A game is played in the fog-shrouded city of Rodaas, and every citizen, from the nameless of the Shallows to the noblest of the Garden, is a player or a pawn. And no one is as he appears.

Not Minette, brothel-keeper and obsessive collector of secrets. Not Uncle Cornelius, fearsome chief of the gang of brutes and murderers known as the Red. Not the cults of Death, Wisdom, and Illumination, eternally scheming and plotting along the Godswalk.

And certainly not the orphaned bread girl known as Duchess.

Yet armed with nothing more than her wits, her good friend Lysander and a brass mark of dubious origin Duchess will dare to play that game for the most coveted of prizes: initiation into a secret society of thieves, spies and rumormongers who stand supreme in a city where corruption and lies are common coin.

I’m not going to lie, this book was a struggle. It’s a good book, I just couldn’t get into it for at least 3/4 of it. Not sure why, ‘cause I ended up liking it.

I assumed this book to be YA, considering the age of the main character, but it didn’t read like it. There were male prostitutes, female prostitutes, torture, theft, gangs, drinking and intrigue up to your ears. I liked it. Even if it took me a while to get into it, the ending made the read worthwhile for me.

I liked the characters, good and bad. I liked Minette, the mistress of the Vermillion, the brothel of the Shallows. I liked the bad guy, Baron Eusbius, even though he doesn’t get much play in the story, I liked to have him there as someone to dislike. I liked Lysander, the main character’s companion and all around awesome dude. Forget the fact he runs a group called Ganymedes, who are young male prostitutes. You’re going to like him.

I liked Duchess. She didn’t drive me crazy, head over heels, I love this character. But I did like her. She’s smart, courageous and resourceful. Everything you’d want in a strong female lead, except for one thing. The authors kept referring to her “Silk” and “Steel”, the weak and strong portions of her personality. That annoyed the crap out of me. That aside, I enjoyed the writing.

They didn’t get much into races and extensive world building, but it’s definitely there. Several races, religions, gods (who appear to have a bigger role than just worship objects), a rich and long history to draw upon. Several gangs: Ganymedes, Lightboys (rich people escorts when the high and mighty go slum diving for a thrill. Assholes.), the Reds, the Blackarms, the Imperial Whites and of course, the Grey.

The Grey is the secret, not so secret as every character in the book knows about them, guild of thieves, rumor-mongers, secret hoarders that permeates the city. Duchess’ struggle to join them throughout the book is what drives the story. Her wish for information about her family and their tragic end. She finds it in the end, and let me tell you, I did not see that coming.

Like I said, took me a while to get into the book. Several reasons, chief amongst them was the fact that I’ve been SWAMPED with work and the time I had free was spent resting, and reading came at night and I was falling asleep already. Which is why it took me a while to read all of it, but, and this is a big but (and I cannot lie), the ending kept me up until 2 AM so I could finish it and find out what was going on. I had an early day next day, but damn it, I had to know what the whole thing was about!

And I did. And it was good. I enjoyed the way things wrapped up, which wasn’t the way I expected, but fitting nonetheless. I enjoyed the place Duchess was at by the end, and how her interplay with all the characters throughout the story brought her to the place she ended up at.

I’m curious where it’ll go from here. I do hope they stop it with the Silk and Steel, thing, ‘cause I didn’t like it. At. All. But I am looking forward to walking through the Shallows with Duchess and figuring out what to do next. Pretty much all her driving goals were met, one way or another, and now she’s in it for herself. No more mysteries, except that big one I avoided mentioning until now. There’s a big shadow, supernatural creature lurking about and Duchess is somehow connected to it. Whaaaaaaa? I know! What’s up with that!

Read the series and find out!


Buy your copy of The Duchess of the Shallows today!
Amazon | Barnes & Noble | CreateSpace
Be sure to add it to your TBR pile on Goodreads!

Labels: Blog Tour, Daniel Ravipinto, Fantasy, Neil McGarry, Review, The Duchess of the Shallows, Will
Email ThisBlogThis!Share to TwitterShare to FacebookShare to Pinterest