Review: Greta and the Goblin King by Chloe Jacobs 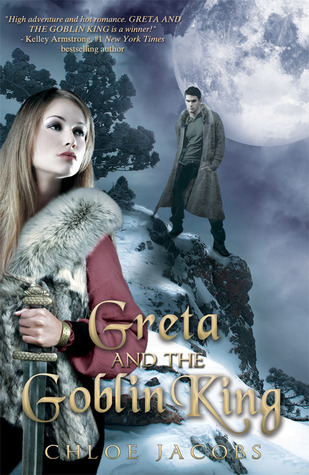 While trying to save her brother from a witch’s fire four years ago, Greta was thrown in herself, falling through a portal to Mylena, a dangerous world where humans are the enemy and every ogre, ghoul, and goblin has a dark side that comes out with the eclipse.

To survive, Greta has hidden her humanity and taken the job of bounty hunter—and she’s good at what she does. So good, she’s caught the attention of Mylena’s young goblin king, the darkly enticing Isaac, who invades her dreams and undermines her will to escape.

But Greta’s not the only one looking to get out of Mylena. An ancient evil knows she’s the key to opening the portal, and with the next eclipse mere days away, every bloodthirsty creature in the realm is after her—including Isaac. If Greta fails, she and the lost boys of Mylena will die. If she succeeds, no world will be safe from what follows her back...

The Writing of Greta and the Goblin King was imaginative and fun to read. It is a mixture of epic fantasy, paranormal romance, and fairy tale that incorporated many elements of each - enough to capture fans of any of the three genres.

The characters in the story were definitely unique. Greta is a teenage girl who found herself in Mylena (which I found myself reading as "Mylanta"), the land of goblins, gnomes, and other fantastic creatures. She not only survived from those who blamed humanity for the problems in that world, but adapted to her new life and, disturbingly, thrived as a ruthless bounty hunter. I asked myself many times if Greta could still be truly human after everything that had happened to her. However, she bored me a bit, for whatever reason that I cannot peg. Isaac, the goblin king, was mysterious and creepy, and I really did not find him to be a good match for Greta. In the name of protecting her, he behaved questionably, and I would have taken out a restraining order against him in the real world. Strangely, I still liked him. You see, he is neither human nor does he think as one, but this damn behavior of scary stalkers in YA books troubles me. (I had a read stalker once upon a time - not sexy.) Then there was Wyatt, who I dubbed Walter in my head because it made sense to me. He was a nice guy, and I always forget about them. He was all noble, and chivalrous, and wonderful... Yeah, I was pulling for the scary stalker goblin king. I feel bad, but I'm grown and I do what I want. :-P

I guess I should mention (because it's important to many of you) that yes, there was the instalove. Personally, I'll ignore it because I was young once and guilty of falling in love at least once a week. These kids were isolated, and hormones do this to a person. Other than that I really don't have any complaints. Greta was mostly badass and made of awesome, Wyatt (Walter) was sweet, and Isaac was fine as long as I pretended that he was David Bowie and not launching dream invasions. 3.5/5 Stars

Imagine the result of a mix of Hansel and Gretel, Peter Pan, and The Lord of the Rings, and that is what you get with Chloe Jacobs World Weaving in Greta and the Goblin King. Greta is a girl who wandered away from home (in a sense) who meets the Lost Boys in Mordor. Greta is undeniably capable of pushing a witch into an oven, but more likely to run a sword through her during a moon phase. The Lost Boys are parentless and in a strange land, but I an't see them going to battle with Captain Hook or the goblins, As for Agramon, he is just as enormous of a mythological threat to Mylena as Tolkien's antagonist, but hardly nightmare-inducing and not nearly as formidable. While reminiscent, at times, of the classic works, Jacobs made Greta and the Goblin King a creation all her own. 4/5 Stars

The Pace of the book was quick, but I was not really at the edge of my seat. Greta was both badass yet lovable enough that I never felt that she was ever truly in danger. Don't get me wrong - she gets into some situations where shit hits the fan. However, I was still engaged with the story and stayed with it. All in all, Greta and the Goblin King is well-written, and the adventure is fun. It's safe to say that it's a book that you won't want to put down. 4/5 Stars

As the Extra Magic, I'm going to address the elephant standing in the room while I was reading the book. 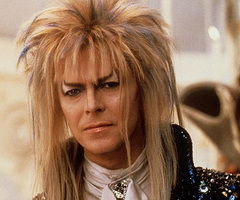 I grew up watching Labyrinth, so David Bowie and his enviously epic guyliner always lingered at the edge of my thoughts. I'm not a teenager, so I pretended that Isaac was David Bowie's "Jareth". I'm sure many women my age have secretly done the same. When Isaac was Jareth, he was perfection. (Okay, Isaac had very little in common with Jareth, but still!) Oh Goblin King, you DO have power over me. So why am I rating Jacobs on this? Well, making me think of my youth is extra magical, and it was fun to fantasize. 5/5 Stars


Greta and the Goblin King is available now!
Amazon | Barnes & Noble | Book Depository | Fishpond
Be sure to also add it to your TBR list on Goodreads!!

To satisfy FTC guidelines, I am disclosing that I received a digital ARC of the book from the publisher in exchange for an honest review. This has in no way affected the outcome of my review. All opinions expressed are rambling, honest, and completely my own.