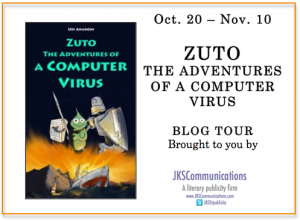 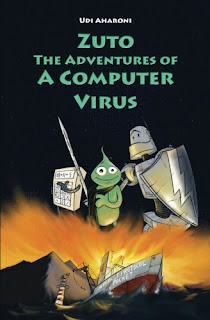 Zuto: The Adventures of a Computer Virus takes place inside a strange, little known world: a personal computer, the perfect setting for a fast-paced, funny, one-minute-long story.

Zuto, a smart, sneaky computer virus, leads a happy life in his secret hiding place: the Recycle Bin. There, among heaps of junk full of surprising treasures, he plans his tricks. Everything changes when a far more malicious program invades the computer . . . and threatens to end all life in it. Together with his Recycle Bin friends—outdated, buggy programs—Zuto sets off to save his world.

The book’s colorful and imaginative metaphors offer an insightful glimpse inside a computer. An appendix, the ‘Zutopedia,’ explains the truth behind the story: how malware works, what’s the role of firewalls, binary numbers, Easter eggs, IP addresses, and many more.


World-Building in Zuto
by Udi Aharoni

Zuto is a story that takes place inside a computer. That is, the world in which the plot occurs is in fact a visualization of the inside of a computer, and the characters are personified programs. This in itself is not new. The 1982 movie “Tron”, for example, already depicted such a world, and since then there were several other movies, TV shows and books of the same kind. It’s interesting, though, to note the differences between Zuto and previous works.

I think all previous works of this genre designed their computer world along the same line of thought: they wanted it to look computerish. This was achieved by putting in things that people usually associate with computers. Many of the visuals are borrowed from what people see on computer screens, and many of the scenes look like a computer game. Also, since a computer is the most advanced technology we have, its internal world is usually visualized using a futuristic theme: hi-tech devices, lasers, the characters are wearing silver, partly glowing, tights, the buildings are square, the vehicles are super-fast.

I took a very different direction. I wanted my version of the internal world of a computer to be first and foremost realistic. Surprisingly, this resulted with a world that doesn’t look computerish at all.

There’s no need for the futuristic theme, for example. There’s nothing futuristic about the way computers work. They’re simply an elaborate cuckoo clock, and in principle you can build one from wood and iron (it’d be very big and slow, though). Also, the internal world has nothing to do with what you see on screen. If you play a computer game, say a car race, you see images of cars on screen, but there’re no tiny cars driving around inside the computer box. The computer box has programs busy with sending the right images to screen at the right time. Finally, there cannot be any hi-tech devices in the internal world of a computer: the computer itself is a hi-tech device. Hi-tech devices are not made of smaller hi-tech devices; they are made of simpler components.

So instead, the world which hosts the adventures of Zuto the computer virus is made of ordinary, worldly things: it has hills and weeds, greasy iron machines, and dust. The internet port, for example, is a bay of blue waters, guarded by a wall of fire. Cargo ships anchor in the bay’s harbor to load or unload (sending messages across the internet is extremely slow compared with most other things computers do, so a slow-going cargo ship is a good metaphor). The hard disk is a vast wilderness where billions of stones shaped like 0 or 1 are scattered around (a real hard disk really is just a repository of bits. It doesn’t need electricity; the bits stay unchanged even if the power is down, so stone bits were chosen as the metaphor here). And so on . . .

Like the world, the plot that occurs within it is also realistic: a description of malware attack, and how the computer defenses react to it (Zuto, while being a computer virus, is not the attacker. He’s a small, buggy virus caught in the cross-fire).

This choice of realism gave my book a very distinct look and feel, and also gave it an educational edge. I think it’s interesting that one small choice in the beginning can lead to a whole new result in the end.


Zuto is available to purchase now!
Amazon | Barnes & Noble | Book Depository | Fishpond
Be sure to add it to your TBR list on Goodreads! 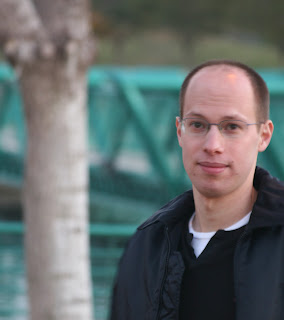 Udi Aharoni is a software engineer and Maching Learning expert with IBM Research. He holds an M.A. in Computer Science.

He published short, original scientific videos on his YouTube channel “udiprod,” which has over a million views, before writing his acclaimed children’s book Zuto: The Adventures of a Computer Virus (Rimonim, August 2009).

Aharoni’s debut published first in Hebrew and was voted one of the nation’s favorite books for ages 9-12 in the Israeli Ministry of Education’s “Book Parade.” The English version followed in August 2012.

The computer whiz visits classrooms – both in person and via webcam – for discussions and lessons surrounding his educational book.

Come back tomorrow to check out my review and giveaway of Zuto!