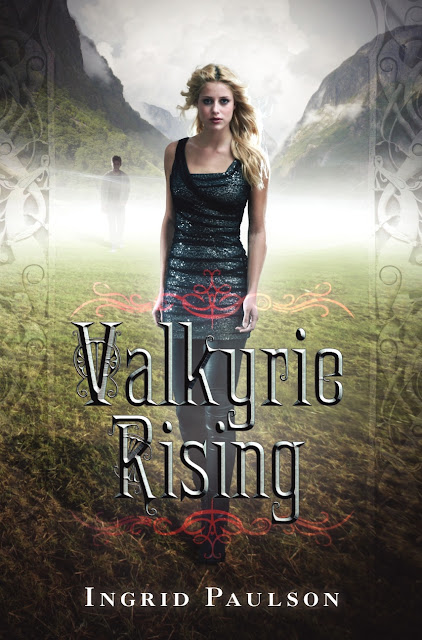 Valkyrie Rising is the young adult debut novel of Ingrid Paulson. It is a mythology-based story set in modern Norway about Elsa "Ellie" Overholt, who discovers a family secret and more to this world during a visit to her grandmother's in Norway.

The Writing of Valkyrie Rising is something that I belive would be perfect for teen readers and other lovers of YA. The characters are interesting and engaging, and the plot never really dragged. The writing style itself is something that teens will have no trouble flying through, and the first person point of view will give the reader a chance to get to know Ellie and connect with her.

Ellie is a fairly normal teen girl whose only real gripe is her very overprotective older brother, Graham. She has a bit of a like-hate relationship with Tucker (Graham's best friend), which is explored in the course of the novel. The minor characters were also well-done, and I especially loved Loki and Astrid. Loki was portrayed to be fairly true to the myths that I've read, and Astrid was awesomely kickass. My only gripe about the characters was that everyone was so damned beautiful. Ellie herself came awful close to being called "Mary Sue" a few times, but I'll back away from that and say that she's not.

As I said before, the story did not drag, but I was a bit thrown off by the usage of time in the story. Ellie and Tuck had a set amount of time to save the day. AS quickly as they traveled on their mission, in addition to all of the events between scenes, it's improbable that they did everything in 48 hours. (Keep in mind they were in a different country.) Ellie's instant badassery also made me raise my eyebrows. Other than that, I liked how the novel was executed. 4/5 Stars

Ingrid Paulson's World-Weaving in Valkyrie Rising successfully wove mythology into the modern world. The reality in the book had mythological beings existing right along with everyone else, and this is slowly revealed to Ellie upon her arrival in Norway. Unlike other YA mythology novels, not everyone in the book is superhuman. I'll grant that most of the main characters are, to an extent, but "regular" side characters played a bit part. I also would like to give Ms. Paulson major props for setting a story using Norwegian mythology in Norway. That, my friends, makes me happy. 4/5 Stars

The Pacing of Valkyrie Rising was good. As I said before, it never really dragged, but I was never at the edge of my seat. I didn't feel a sense of urgency, despite the fact that Ellie's brother had been kidnapped by beautiful demigoddesses. There's a good chance that I may have wandered away from the book if it wasn't for the Writing. It was a nice, leisurely rush through Norway to find and do Things, and I can't complain - the scenery was nice. 3/5 Stars

Mythology will always be the Extra Magic for me. I mean, unless the author REALLY messes things up. I may even like mythological reimaginings better than fairy tales. *ponders* Maybe not. Anywho, Ingrid Paulson wrote a lovely book. I liked it, and I think teen readers will as well. Okay, you adult crossover readers might just enjoy it, too. 5/5 Stars


Valkyrie Rising is available to purchase today at your local bookstore or online.
Amazon | Barnes & Noble | Book Depository | Fishpond
Be sure to also add it to your "Want to Read" pile on Goodreads!

To satisfy FTC guidelines, I am disclosing that I received the book for reviewing purposes as a part of a Southern Book Bloggers tour in exchange for an honest review. The advance copy was provided to the tour by the publisher, which has in no way affected the outcome of my review. All opinions expressed are rambling, honest, and completely my own.