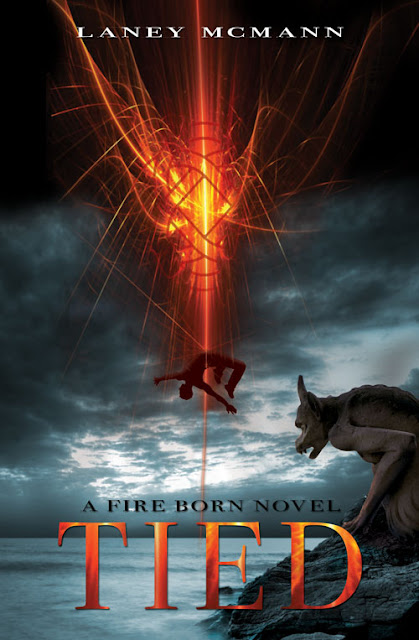 Normal people don't believe their nightmares stalk them. They don’t fall in love with boys who don’t exist, either.

Seventeen-year-old Layla Labelle, though, is far from normal. Her delusions walk the earth. Her hallucinations hunt her, and her skin heats to a burn every time her anger flares.

Or is that all in her head?

Layla doesn't know what to believe any more because if none of that’s true, Max MacLarnon must be an illusion, and her heart must still be broken.

No matter how much she wants to believe Max is real, doing so would mean everything else is, too. How, then, is that possible?

The answers lie in an age-old legend the supernatural aren’t prepared to reveal, and with a curse that could tear Layla and Max apart forever—if it doesn’t kill them both first.

In TIED, book one in the Fire Born trilogy, learning the truth will mean fighting an arsenal of demons, and being with Max will put Layla on a path toward her own destruction.

Just how far will Layla go to protect the one she loves?

The answer may never be far enough ... away.

When I first began writing Tied in 2010, my character's would visit my dreams. Streams of dialogue would run through my head—usually from a scene I'd been trying to work out the day before. "Aha!' moments that linked one scene to the next in a way I hadn't thought of, would come to me in the middle of the night.

It was as if my subconscious knew more about the story than I did. And while a lot of the dreams were still clear when I woke up, some would evaporate the second I opened my eyes.

Nightmares and dreams are strange that way. They seem to come in clips of images. Maybe they're in color, or in black and white. Maybe you remember every word—every feeling you had. Or maybe you wake up thinking you didn't dream at all until a vague sense pulls at you, and you remember something. A sliver of something, but the more you try to remember the dream, the faster it slips away.

I tried to harness that feeling of confusion when writing Tied. What would it feel like to constantly have nightmares infiltrating your mind? What would you do to try to stop the dreams from coming? The main character in TIED, Layla, is plagued by ongoing nightmares, and she believes she's losing her mind because of them. She isn't too happy about that. ;)

The nightmare element of Tied was fun to play with and allowed my imagination to run wild.

My window opened easily. The same way it had so many times before. Climbing out on the ledge, I found the ground empty and dropped from the second floor—a jump I'd made a hundred times. In another life.

My feet sunk into the sand, and I followed the well-worn pathway through the dunes. Even the strong evening winds hadn’t misshaped the deep gully. The ocean's breeze lashed at my hair as the moonlight glinted off the water’s surface. Seagulls flew up from their nesting grounds. They should have recognized me, since I’d been wandering at night for so long. Wrapping my arms around my knees to block the slight chill, I settled in the sand, and the birds quieted in a tight huddle, the wind blowing their feathers in awkward angles.

My gaze fell on a figure standing beyond the dunes edge, a shadow hidden within the darkness. My pulse quickened, but I didn't move. Another trick—an illusion. Weary of the games my mind continued to play, I bit back tears and the catch in my throat. I should have been immune to them—the hallucinations—the way they haunted me and followed me, but I wasn’t.

Forcing myself to blink, I turned my head away. The visions had grown worse as I’d become older. I’d tried to convince myself they were nightmares—or weird dreams. Hoped for years they were, but only people who sleep dream.

Unable, or unwilling to stop myself, I glanced back over my shoulder, thoughts flooding my brain. Memories I knew couldn’t be memories but I cherished all the same. For years I’d tried to shake them away. To make myself forget.

A stone raps against my bedroom window. I creep over and peer through the blinds.

"You’re late." I lean out over the sill, grinning at the boy staring up at me.

I climb onto the window ledge. "Be nice. She’s my friend."

He takes one casual step to the side.

The jump isn’t too high; I make it all the time.

He grabs my hand when I land beside him in the soft sand. "Ready?"

"I’m going to tell!" Benny runs across my yard toward me, her blonde pigtails flapping in the wind. "You’re not allowed to talk to that boy, Layla! Your mom said!"

Max tightens his grip on my hand.

"Three!" Max and I leave the ground.

“You're going to get in so much trouble.” Benny’s yell rings in the distance.

Our feet touch down in the wet grass of the Otherworld, icy sea air whipping at my face.

"Hopefully, she won’t follow us again." Max lets go of my hand.

"She won’t. I told her not to." I lead the way down the cliff face to the ocean.

"She never listens to you."

With a passion for the supernatural and all things magical, Laney McMann developed a voracious appetite for reading fantasy at a young age. A vivid imagination helped set the stage for creating her own worlds and placed her onto the writing path.

By the time she reached her teens, she'd accumulated notebooks full of poems, which led to short stories and finally novels. Young adult dark fantasy, paranormal romance, and mythology are among her favorite genres.

A former classical dancer and chef, she grew up in sultry Florida where she still resides with her family.


Enter to win one signed paperback copy of Tied, two E-book copies of Tied, and five signed Tied bookmarks
Ends at 12:01am EST on October 15th