Hello, bashers and readers, alike! I'm so happy that you stopped by to visit my blog today to read my interview with debut author, Helen Douglas. After Eden is her debut novel that will be released in November. I read and enjoyed it several months ago, and you can find my review HERE. I hope you enjoy finding out a little bit more about Helen as much as I did! 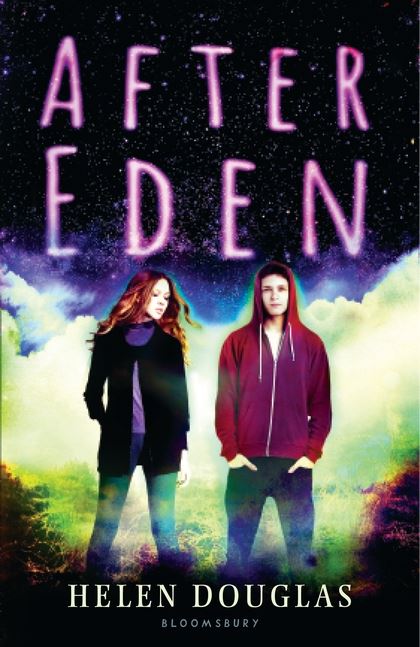 The day Eden met Ryan changed her world forever. Actually, not just her world. Ryan has time traveled from the future to save the world. In a few weeks, Eden’s best friend Connor will discover a new planet—one where human life is possible. The discovery will make him famous. It will also ruin the world as we know it. When Ryan asks Eden for help, she must choose between saving the world and saving her best friend’s greatest achievement. And a crush on Ryan complicates things more than she could have imagined. Because Connor is due to make the discovery after the girl he loves breaks his heart. That girl is Eden.

Grounded in a realistic teen world with fascinating sci-fi elements, After Eden is a heart-pounding love triangle that’s perfect for dystopian fans looking for something new to devour.

Please tell us a little bit about After Eden in your own words but with a Twitter twist – 140 characters or less.

A boy from the future. A girl from right now. And a secret that’s out of this world. (Love story with a sci-fi twist.)

Who was your favorite character to write in the novel?

Ryan. Without a doubt. He has so many secrets. All the time I was writing him, I knew what the truth was for him, but couldn’t let him reveal it. So there was always that gap between the truth and what he was allowed to say. Those are always the most interesting characters to write.

What kind of research did you do for After Eden?

did lots of research on theories of time travel (e.g. the predestination paradox which I rejected because After Eden is about making your own destiny), but ultimately used what worked for the story – it is fiction after all and even experts in the field don’t agree. Also, I wrote After Eden in 2010, but set it in 2012 as I wanted it to be as contemporary as possible. I had to look up things like which constellations would be visible at specific times of year. And making sure I got the correct phase of the moon and the correct times for sunrise and sunset, moonrise and moonset for specific dates in 2012. Given how significant the night sky is in After Eden, it was really important to me that those details be absolutely right.

Have you always been drawn to the stars? If so, which star or constellation is your favorite?

I’ve always found looking at the stars romantic and inspiring, and as a child I frequently woke up in the middle of the night to watch meteor showers. But I’ve never been great at identifying constellations. I have maybe a dozen at most that I can recognise easily. My favourite constellation would have to be Orion. Easy to recognise, bright stars and a cool nebula. And my husband introduced me to it.

Would you travel to outer space if you were given the opportunity?

Outer space? Sign me up! Seriously, I’m a huge fan of Star Trek and the re-imagined Battlestar Galactica series. If spaceships were as advanced as they are in those TV shows, I’d have no problem. I would love to visit other planets and star systems. But with the current technology? I don’t think so. They don’t call those reduced gravity craft ‘vomit comets’ for nothing. Until spaceships come with artificial gravity and FTL drives, I’ll keep my feet firmly planted on the earth.

It would take a MAJOR catastrophe to get me off of the safety of ground. *shudders* Anywho, do you believe time travel is possible?

No matter how illogical time travel seems, I’m drawn to it and I don’t want to accept that it’s not possible. I would say that I hope that it is, while accepting it’s a long shot!

Which author or novel would you say has been the most inspirational to you as a writer?

Any time I read a well-written book, I’m inspired. Most recently, John Green’s The Fault In Our Stars really impressed me for its precise use of incidental actions that the characters do. And Madeline Miller’s The Song of Achilles was just brilliant at invoking setting.

Thank you so much for answering my questions, Helen! It was such a pleasure having you here at Bibliophilia, Please today, and we wish you the very best of luck with your novel!

Helen Douglas was born in a small beach town in Cornwall, much like the fictional town of Perran that appears in After Eden. As a child, she enjoyed reading, building dens and writing stories of her own. Her teenage years were centered around the beach. Summer days were spent swimming and body-boarding. Summer nights meant beach parties with bonfires and barbecues. When it rained, which it did a lot, she read lots of books and dreamed of being a writer.

After leaving school, she lived in many different places including London, California, New York and New Jersey. She's now back in Cornwall where she lives midway between the woods and the beach. When the sky is clear, she can usually be found walking in the woods, hanging out at the beach or looking at the stars. When the sea mist rolls in or it’s raining, she spends her time reading books, writing and dreaming up her next story.