Book Blast (Giveaway): Eve Hallows and the Book of Shivers by Robert Gray 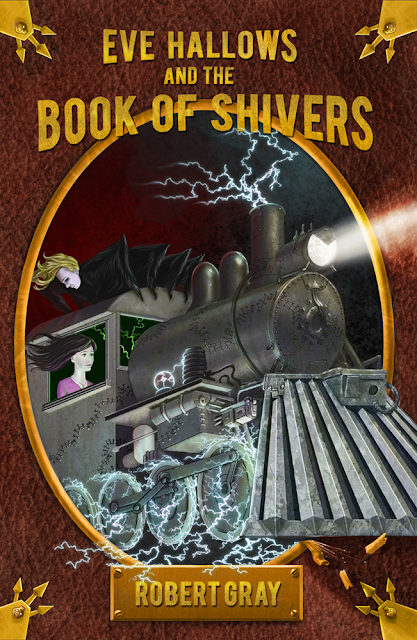 Title: Eve Hallows and the Book of Shivers (The Nightmare Series #3)
Authors: Robert Gray
Blast Organizer: I Am A Reader, Not A Writer
Release Date: October 26, 2013

So far, Eve's summer vacation has been uneventful, but when her grandparents—traveling all the way from the monster world known as Gravesville—appear at her doorstep, she learns that the URNS Director has gone missing. Worse, a new director, bent on destroying humans, has taken over URNS.

Eve and her family are no longer safe in the human world, and as they race to escape this new threat, Eve stumbles into a trap, which forces her back to Gravesville along with her family and friends. But once there, everything goes adorably wrong, and her best chance to get out of this mess is to seek out The Book of Shivers and the elusive author Sedrick Creach—the only creature who knows the secrets of the Nightmare Books. Unfortunately for Eve, searching for Sedrick and the next book in the series will reveal uncomfortable details about her own murky past.

Once again, Eve and her friends find themselves on an incredible adventure—one that involves underground battles with bloodthirsty creatures, a lightning-fueled train, and some unexpected new allies.

Hilarious and bone-chilling, this third book continues the story of an unlikely hero trying to save not one, but two worlds … This time around, though, Eve's not sure she can even save herself.

Eve Hallows and the Book of Shrieks (The Nightmare Series #1)

For fourteen-year-old Eve Hallows, life can be summed up in one word—horrible. She has the most horrible friends. She lives in a horrible old castle. Even her family is a bunch of horrible monsters.

However, in the monster-inhabited world of Gravesville—a world where messages are sent through Ouija boards, jack-o’-lanterns get facials to suit their moods, and the worst thing Eve has to deal with are those annoying zombie tourists who overrun her favorite graveyard during the Halloween season—horrible means wonderful. And everything for Eve is perfectly horrible.

But her life is about to go head over heels when a mysterious group known as The Source starts terrorizing Gravesville. Now she must move to the human world—where everything is opposite ... and for Eve, that's absolutely adorable!

Praise for Eve Hallows and the Book of Shrieks

"Move over, Neil Gaiman’s Coraline and The Graveyard Book … make room, Lemony Snicket’s A Series of Unfortunate Events… you’ve got company and competition for shelf space!" -- The Horror Fiction Review

"This is the perfect book to be read aloud, read at night under the covers or simply devoured in one sitting. Robert Gray’s Eve Hallows and the Book of Shrieks simply shines with all of its fun creepiness, compelling characters and stellar writing. A MUST read for any MG fan!" -- Word Spelunking

"Eve Hallows is highly imaginative without being too complex for its target audience. Fall in love with Eve, her friends and her family of adorable monsters. Lose yourself in a light read that will remind you of those days when your English teacher just wants you to read something, anything. This book is it. The one that you wish you read when you were in grade school." -- Joyous Reads

"Overall, this book was fantastic. It presents an admirable role model as well as a strong family unit which will benefit young readers. When so many books right now have presented teens in a not-so-flattering light, it is so wonderful to find a book like this one." -- Book Cover Justice

Eve Hallows and the Book of Shadows (The Nightmare Series #2)

Ever since encountering The Source and its minions on Halloween, Eve Hallows has found life surprisingly quiet … not to mention adorably boring! So when Dad receives a Ouija message that she must return to Gravesville, Eve couldn't be happier—at least until she discovers the Director of URNS, also known as the Grim Reaper, has a special job for Eve … one that will lead her to New York City and to the true identity of The Source. With The Book of Shrieks offering zero help and a new URNS agent driving the school boys — and Eve! — crazy, Eve's beginning to realize this whole saving-the-world nonsense isn't what it's cracked up to be. All this and she still has to find The Book of Shadows....

Praise for Eve Hallows and the Book of Shadows

"This book was perfectly horrible! Horrible meaning amazingly awesome, of course. Eve's world once again sucked me in and would not let go until this part of Eve's story was finished" -- Lili Lost in a Book

"This is a perfect combination of YA, Horror, Paranormal and Fun!" -- Book Lovers Paradise

"I love love love Eve. She's a strong, awesome, female character that I would be delighted to recommend to any little girl. (No sexism at play here, boys will love this book too!)" -- Must Read Faster

""I absolutely love this series and cannot wait to keep reading the fun adventures of Eve Hallows. Mr Gray has such a fantastic style of writing and his books are such fascinating tales, that everybody should read them for the fun factor. The topsy turvy lingo, adorable creatures and imaginative Gravesville, make one horrible book." -- Turner's Antics 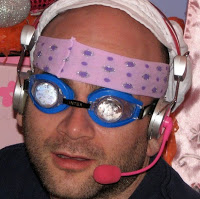 Robert Gray is a writer. If that job description doesn't impress you, how about fantasy writer? Too general? Well, he doesn't get insulted if you call him a horror writer. If horror's not your thing, then scratch out horror and replace it with suspense. And for the kiddies, you can slap on a YA or MG in front of that title.

Gray lives in Bushkill, Pennsylvania with his wife and two children.

a Rafflecopter giveaway
Open only to those who can legally enter, receive and use an Amazon.com Gift Code or Paypal Cash. Winning Entry will be verified prior to prize being awarded. No purchase necessary. You must be 18 or older to enter or have your parent enter for you. The winner will be chosen by rafflecopter and announced here as well as emailed and will have 48 hours to respond or a new winner will be chosen. This giveaway is in no way associated with Facebook, Twitter, Rafflecopter or any other entity unless otherwise specified. The number of eligible entries received determines the odds of winning. Giveaway was organized by Kathy from I Am A Reader, Not A Writer and sponsored by the author.


VOID WHERE PROHIBITED BY LAW.

Labels: Book Blast, Eve Hallows and the Book of Shivers, Giveaway, I Am A Reader Not A Writer, Middle Grade, Paranormal
Email ThisBlogThis!Share to TwitterShare to FacebookShare to Pinterest