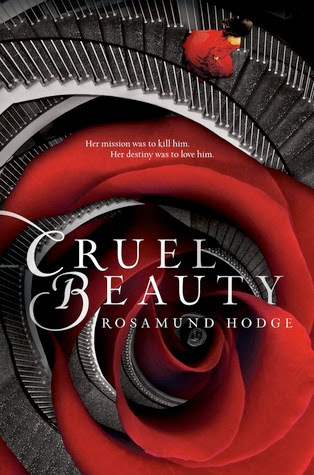 Since birth, Nyx has been betrothed to the evil ruler of her kingdom—all because of a reckless bargain her father struck. And since birth, she has been training to kill him.

Betrayed by her family yet bound to obey, Nyx rails against her fate. Still, on her seventeenth birthday, she abandons everything she's ever known to marry the all-powerful, immortal Ignifex. Her plan? Seduce him, disarm him, and break the nine-hundred-year-old curse he put on her people.

But Ignifex is not what Nyx expected. The strangely charming lord beguiles her, and his castle—a shifting maze of magical rooms—enthralls her. As Nyx searches for a way to free her homeland by uncovering Ignifex's secrets, she finds herself unwillingly drawn to him. But even if she can bring herself to love her sworn enemy, how can she refuse her duty to kill him?

The story itself kept me captivated. I was so caught up in the story, the mysteries, and Nyx that I read this all within a few hours on a Saturday afternoon. The mysteries in the house about Ignifex and the mystery of the house itself were intriguing and kept me guessing. Who was Ignifex really? However, the story lost a little of itself and got a little murky with some unbelievable parts toward the end. Also, while there was a wonderful love story, there wasn’t a lot of other plot. Nyx is married to Ignifex due to a bargain, but her father also has an assassination plot. This plot and the world building along with the reasoning for the plot are strong in the beginning but sort of peeter off and take a back seat to the love story. This didn’t bother me as I was expecting a Disney Beauty and the Beast story and not an epic fantasy full of great plots and world building. But I can see that a lot of readers will probably have issues with the story that strays away from the assassin story to a love story.

I liked Nyx, although I’m sure she will be a hard character for others to like. She’s a flawed character, but almost everyone in this story is flawed in some way. I love flawed characters, and I love a world filled with characters who live in the grey, so Nyx was a great character for me. Even in her anger and bitterness, I could see her hope, her compassion, and her kindness. She refused to be submissive to Ignifex and her strength showed throughout the book. She wanted to save her people even though she hated that she was forced to do so. She wanted to save her sister, even when her love was tainted with her bitterness and hatred. She worked hard even though she knew that the price may very well be her death. She grew throughout the book, and showed less of her anger and bitterness, but she never lost her strength.


There is a love triangle, sort of, which normally I would hate. This one isn’t that bad, but mostly because it is only sort of a love triangle. I don’t want to go into details because it might ruin some of the story. I will say that there is some instalove that caught me totally off guard. Although it was very quick and quite surprising, for some unexplainable reason, it didn’t really bother me that much. Maybe because I just rationalized that Nyx needed some love and let it go.


“Well, I’m already hoping there could be a dinner where you don’t try to stab me with your fork,” he said.
“You might need to make your peace with disappointment.” - p. 69, ARC


I would say that this book is loosely based on Beauty and the Beast, and is mostly based on the Greek/Roman myths. I absolutely do not get the reference to Graceling in the synopsis- even the genre is off. To me, Graceling is more epic fantasy. This is clearly young adult fantasy with some basis in Greek mythology.

Overall, I really enjoyed the novel, although it does have its issues. I can also see that it won’t be a novel for everyone, especially those who go in expecting more fantasy plot than romance. Regardless, I will be interested in reading whatever Hodge writes next, especially if it is another stand alone.

To satisfy FTC guidelines, I am disclosing that I received an advance copy of the book from the publisher in exchange for an honest review.