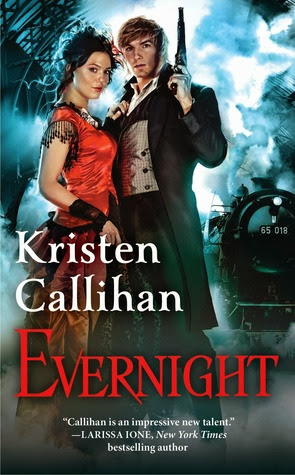 Will Thorne is living a nightmare, his sanity slowly being drained away by a force he can't control. His talents have made him the perfect assassin for hire. But as he loses his grip on reality, there is no calming him—until he finds his next target: the mysterious Holly Evernight.

Love must cast aside the shadows . . .

Holly cannot fathom who would put a contract on her life, yet the moment she touches Will, the connection between them is elemental, undeniable—and she's the only one who can tame his bouts of madness. But other assassins are coming for Holly. Will must transform from killer to protector and find the man who wants Holly dead . . . or his only chance for redemption will be lost.

I just finished Shadowdance (Thanks Kayla!!) and really enjoyed it! I love this series! (even though I ALWAYS confuse it with the London Steampunk series by Bec McMaster! If you love this series, then you should definitely check out the London Steampunk series too! And vice versa.) I'm so glad that Callihan continued with the series past the original three sisters, even though I wasn't sure at first if I would like it. And, from what we see of Will Thorne in Shadowdance, I can't help but feel sorry for him.