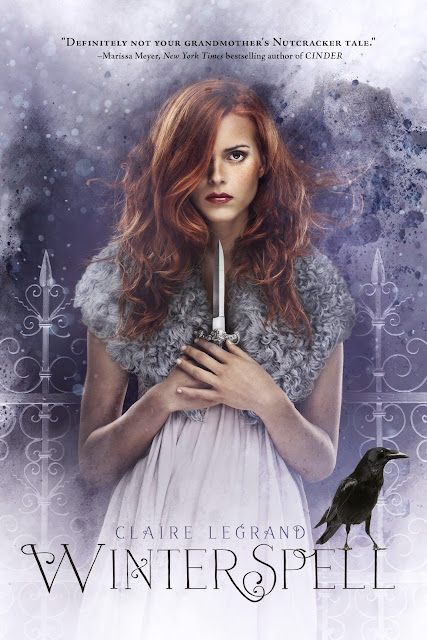 The clock chimes midnight, a curse breaks, and a girl meets a prince . . . but what follows is not all sweetness and sugarplums.

New York City, 1899. Clara Stole, the mayor's ever-proper daughter, leads a double life. Since her mother's murder, she has secretly trained in self-defense with the mysterious Drosselmeyer.

Then, on Christmas Eve, disaster strikes.

Her home is destroyed, her father abducted--by beings distinctly not human. To find him, Clara journeys to the war-ravaged land of Cane. Her only companion is the dethroned prince Nicholas, bound by a wicked curse. If they're to survive, Clara has no choice but to trust him, but his haunted eyes burn with secrets--and a need she can't define. With the dangerous, seductive faery queen Anise hunting them, Clara soon realizes she won't leave Cane unscathed--if she leaves at all.

Inspired by The Nutcracker, Winterspell is a dark, timeless fairy tale about love and war, longing and loneliness, and a girl who must learn to live without fear.

I picked up Winterspell because the connection to The Nutcracker was intriguing and I had never read anything by Claire Legrand. I was expecting a light fantasy based on fairies and a little magic, but I got so much more than that.

From the beginning of the story, the plot was fast paced and pretty action packed with fairy machines attacking houses and trains blowing up. Around the middle, when Clara and Anise meet there is a little bit of a lull, but the plot quickly picks up again.

I really liked Clara’s transformation from timid and mousy girl to courageous and confident woman. I also liked that the characters weren’t black and white/ good versus evil. Anise wasn’t just a monster because she was the bad guy, and Nicholas wasn’t perfectly Prince Charming. Anise had characteristics which Clara could love or pity, the reader was able to see some of her redeeming qualities.

Legrand wrote a dark fantasy novel featuring mages, human and faeries, yet her writing never had that dense sense that is sometimes found in high fantasy. The world building was a little confusing at first, but I think that is due to my own thoughts rather than the author’s work. The fairies in this story are attacking the humans in another world with machinery. For most of the stories about fairies that I’ve read, the fairies are afraid of machines, iron or metal and/or hurt by it. It took over half the book for me to stop thinking that the humans were the ones destroying the world with machines, when it was actually the fairies.

Winterspell did seem a little rushed in parts and there were things that I wish were fleshed out a little bit more. In my opinion, Clara forgave Nicholas way too quickly and easily with pretty much no explanation on why he did what he did. I also wanted to know more about Anise’s reasons for doing some of the things that she did. Even though the conclusion was a little too neat and tied in a bow, it was a good ending for the story and it showed that Clara had definitely grown up.

I enjoyed Winterspell and it was the perfect companion on a 8-hour car drive coming home from vacation. I’ll definitely be reading more from Legrand.

I wouldn’t recommend the book to a younger YA audience, and I'm a little confused that this being marketing to the YA crowd at all. There are some definite mature themes. There are at least three instances where Clara or someone she is around is almost forced into a sexual act. Also, there is a section of the book were Clara and Nicholas are hidden by staying with some courtesans.