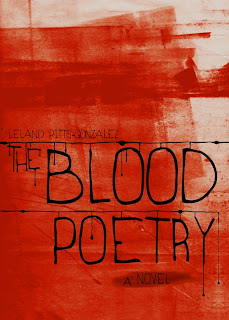 The Blood Poetry is a dark and otherworldly literary novel about a clan of grotesques. Epstein, the protagonist, who delivers his innermost rants in a berserk vernacular all his own; Abby, Epstein’s wife, whose disappearance sparks our protagonist’s descent into guilt and vice; Olivia, Epstein’s mother, who is undead and tames her ruthlessness by joining a Pentecostal church; Astor and Fester, conjoined twins who date back to the Civil War and elders of the Pentecostal church who profess their own brand of redemption to Epstein; Professor Applebaum, Olivia’s boyfriend during Epstein’s childhood, who forced Epstein to participate in a series of horrifying acts; and our once rambunctious Sylvia, Epstein’s daughter who returns to life after dying, only to become repulsed by the sound of her grandmother’s thoughts and all human touch, but whose yearning for her father to restore her to health is Epstein’s best chance at reclaiming his own humanity.

I arrived at the Javits Center in New York City for the BookExpo — an oversized, rolling suitcase in hand to tote back all of those advanced copies of my novel that I would surely fail to give away. Inside, the Javits Center was somewhat aesthetically pleasing in that express, faux-luxury-hotel kind of way. Yet, mainly it was a beehive of suited and badged industry folks, shuffling as quickly as possible through the aisles and offshoots lined with publishers and author’s associations — some of which by this time next year will have gone under.

But book-signings aren’t supposed to be a time for pessimism and jadedness. I was, in fact, heading toward the Horror Writers Association booth for perhaps my only chance to autograph books for a captive audience. I had written a bloody, despicable, hilarious, trashy and pseudo-philosophical horror novel. Or, that was what my pseudonym whispered into my ear every night when I fantasized about characters for some newfangled fiction. “Brilliant!” my pseudonym reassures me. “Maybe just a little pretentious and deplorable,” is what I tell him with my thoughts, but someone has to reassure you when your chosen obsession is to make things up.

I digress: the Expo. I arrived at the booth quite early and had the chance to chat with my fellow HWA members. They, too, seemed like mild-mannered men — not the types who yearned to terrorize their audience. Secretly (or not so secretly) I am compelled to titillate and frighten you, but with oddly constructed sentences; a narrative voice you can’t get out of your head; and the surreal, starkly imagined settings where anything can happen. That person named “Leland” who, although not so brilliant, definitely has one foot inside a succubus’ netherworld where:


I continued to chat with my horror writer compatriots. Nice men, humble. And then, droves of people hungry for free books strolled by our booth. “THE BLOOD POETRY,” a woman commented. “I don’t really read poetry.” I responded, “It’s actually a novel.” I did, in fact, manage to autograph, give away, and pitch this small and murderous tale. I, too, didn’t look the part of the author of literary bloodletting: I normally go to hairstylists (no barber for this guy), wear those “skinny jeans,” blazers, a pleasant smile, and can chat up most girls’ mamas. “Don’t sign my name,” some of the would-be fans instructed. “Just sign your name.” I thought this was odd, but someone told me that in the off chance I would become an actual known — and recognized — human being, they’d be able to sell my identity on eBay. I signed and signed. Was I even autographing the books in the correct place? I met a blogger; a publicist; a publisher who swore she’d read my novel and review it in her fabulous online magazine; a cinematographer attempting to drum-up business for authors dying to make book trailers; and a woman who was trying to pitch a “Do It Yourself” MFA program.

Finally, I managed to give away all of my books. It was an odd feeling: there were now dozens out in the ether, but I wasn’t sure anybody would bother to read them. “But that’s OK,” my pseudonym continued to reassure me, “at least that suitcase is empty, right?” I’m not sure I yearn to be famous, per se. Well, that’s actually a complete lie. I’d like for you to be intrigued just enough to consider perusing the opening pages of The Blood Poetry — a novel for which I was hired to be a “ghost writer.” The actual author is my pseudonym, that other Leland, who’s always around the corner in the back alley of my other brain — his bloody mouth agape and begging for me to “speak” for him. I do indulge him every-now-and-then. Yes, for the most part, BookExpo America 2012 was a minor success, and the other Leland thought so as well. Of course, I couldn’t compete with the other literary rock-stars at The Expo who, too, had written brilliant books to promote: Jimmy Fallon, Kirstie Alley, and Michael Bolton. I wondered if they had pseudonyms and doppelgangers who fed their delirious, mildly dangerous obsessions. I wondered what Michael Bolton’s doppelganger looked like. It’s probably just a replica of his younger self — twirls of long hair that draped past his shoulders, despite the bald spot on top. Did Kirstie Alley’s double run amok with her mouth agape, constructing the dazzling and red-hot phraseology of mad women? The Javits Center and all of that expo mumbo-jumbo excited me for one afternoon. To the phenoms who traipsed through the catacombs of that edifice with great ambition on their sleeves: I was a literary compatriot with something big and bold to exclaim. They surely didn’t notice me — and may never discover The Blood Poetry — but for at least one stark moment while approaching sleep in the very near future, they’ll listen.


Available today! Amazon | Barnes & Noble
Be sure to also add it to your TBR pile on Goodreads! 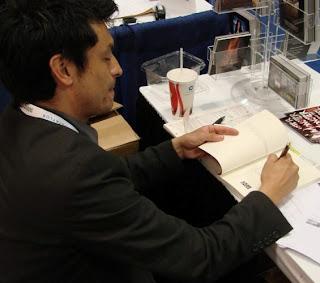 Leland studied creative writing and ethnic studies at San Francisco State University where he discovered the enormous possibilities of poetic language, experimentation, and critical theory. He eventually earned an MFA in Writing from Columbia University on a merit fellowship. He has published fiction in Open City, Fence, Dark Sky Magazine, Drunken Boat, and Monkey Bicycle, among other literary journals. He is also the Project Director for an upcoming literary series of happenings, Phantasmagoria, for which he received fiscal sponsorship from The New York Foundation for the Arts. He lives in Brooklyn, NY. This is his first novel.