Giveaway: Fingerprints of You by Kristen-Paige Madonia 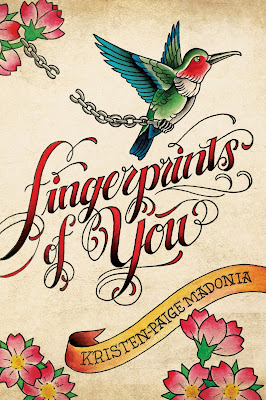 Lemon grew up with Stella, a single mom who wasn’t exactly maternal. Stella always had a drink in her hand and a new boyfriend every few months, and when things got out of hand, she would whisk Lemon off to a new town for a fresh beginning. Now, just as they are moving yet again, Lemon discovers that she is pregnant from a reckless encounter—with a guy Stella had been flirting with.

On the verge of revisiting her mother’s mistakes, Lemon struggles to cope with the idea of herself as a young unmarried mother, as well as the fact that she’s never met her own father. Determined to have at least one big adventure before she has the baby, Lemon sets off on a cross-country road trip, intending not only to meet her father, but to figure out who she wants to be.


Fingerprints of You is now available everywhere!
Amazon | Barnes & Noble | Book Depository | Fishpond
Be sure to add it to your TBR list on Goodreads!

Since this is a rare contemporary that I'm seriously excited about, as I mentioned in yesterday's interview with Kristen-Paige Madonia, I am giving away a copy to one of YOU guys. Fingerprints of You releases today, so I will have the book making its way to the winner as soon as the contest ends (12:01 EST August 21st).

Labels: Contemporary, Fingerprints of You, Giveaway, Kristen-Paige Madonia
Email ThisBlogThis!Share to TwitterShare to FacebookShare to Pinterest