Review: So Close to You by Rachel Carter 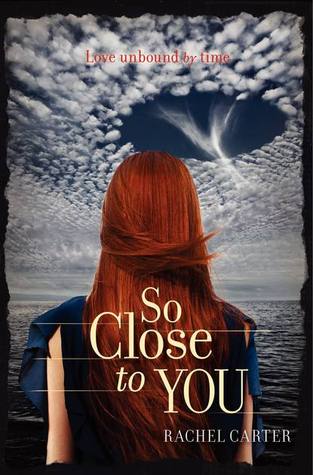 So Close to You is the debut novel of young adult author, Rachel Carter. It is about a young girl, Lydia Bentley, and her search for answers about the Montauk Project and Camp Hero.

The Writing of So Close to You gets no complaints from me. Even though the copy I had for reviewing purposes was an ARC, I cannot recall any problems that I had with the structure of the book itself. It is written in a way that is not intimidating, so teens (even the younger ones) will have no difficulty in reading this book. I suppose the theme of the book is family and the lengths we're willing to take with our loved ones. 4/5 Stars

Rachel Carter's World-Weaving in the story is quite lovely, and I had no problem believing the parts of the book that were set in the 1940s. I thought Ms. Carter captured the essence of that time period (as I think of it) and portrayed the atmosphere of a country at war convincingly. She even included pop culture references from that era that teens may be excited to recognize. However, I found the characters in the "world" (both 1944 and 2012) to be a bit two-dimensional, but that is not to say there is no beauty in a flat image. Lydia Bentley is the only one with substance, but she has a bit of a one-track mind. She offered no surprises or growth (not that there is much point for it in the story). I won't even get started on the instalove.

As a science fiction nerd, I do need to touch on that aspect of the world-weaving. I wanted more explanation than what was given for the rules of time traveling in Carter's world. Not much more was offered than a nod to Edward Lorenz' Butterfly effect (also known as the Chaos theory). I suppose it doesn't help that I always go back to Ray Bradbury's "A Sound of Thunder" when reading about these things, but I digress. I know that I'm hard to please where time travel and paradox is involved. Also, I came to this book excited about reading nerdy things (okay, I thought I was getting inter-dimensional travel), and I found a time-traveling contemporary novel. I'm not saying it's a bad thing - just not what I had expected. 3/5 Stars

Now here is where I started to have trouble with the book. The Pace of the novel was a little slow for me. I kept waiting on something - anything - to happen. See, I find myself stressing over plot points such as being stranded in another place/time/etc., and I don't like that kind of tension. I like it even less when the protagonist can leave at any time, but doesn't. (Where is Travis when you need him? Kidding...) I am well aware that when the tension is a major component of the book that it will not end until the book does. This is precisely why I do not read them. Once I take away my irritation at Lydia being in the wrong time, I can appreciate the pacing of the novel. It's not bad and it has exciting parts - I was just distracted by the tension. 3/5 Stars

Since I did not do well with the pace and tension, and So Close to You was not what I had expected, my Attention Span suffered. It took me five days to read the book (it usually only takes two when I have the amount of free time that I did), and it probably would have been longer if I wasn't participating in the ARC tour. I kept getting distracted, and it was hard to go back and read. About halfway through the book, I couldn't stand the tension any longer and skipped to the end of the book. I still finished it, but I was tired of waiting to find out what happened. 2.5/5 Stars

Despite the drawbacks to the book for me, there is some Extra Magic. Though the characters lacked development, they were a lot of fun to read. I loved Mary Bentley's enthusiasm, and Lucas was pretty dreamy. I would've been more than happy to stay with him in 1944. I also enjoyed the way Carter incorporated the wartime rationing into the story. The descriptions of the clothing and what the women had to give up for the war was a nice touch. I giggled when Mary complained about having no bras or hosiery and how she painted it onto her legs - seam included. It was charming and fit the story well. 3.5/5

So Close to You will be enjoyed by any reader who likes a little time travel with their romance and doesn't want to do any heavy lifting, plot-wise. I also think it will appeal to sci-fi and contemporary readers alike, as long as they don't go in looking for too much of one of those genres. It really is a unique young adult novel, and the characters are a lot of fun. It is also a shame that Michael Crichton and Ray Bradbury made my time travel standards so high. While not for me, I have no doubt that many readers will find much to enjoy in the book.


Buy Your Copy Today: Amazon | Barnes & Noble | Book Depository | Fishpond
Be sure to add it to your TBR list on Goodreads, too!

To satisfy FTC guidelines, I am disclosing that I received the book for reviewing purposes as a part of a DAC ARC Tour in exchange for an honest review. The book was likely provided to the tour either by the publisher or author, which has had no effect on the outcome. All opinions expressed are honest and my own.