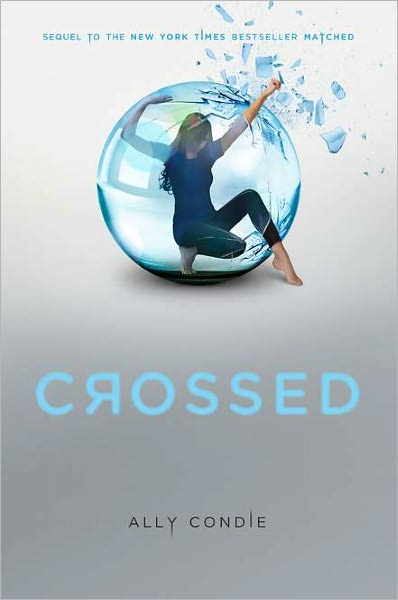 Crossed* by Ally Condie is the highly anticipated sequel to the New York Times bestseller, Matched. In it, Cassia Reyes searches for her lost love in the dystopian, post-apocalyptic future United States. It is told from the alternating viewpoints of Cassia and Ky Markham. (You should probably stop reading right here unless you don't mind getting some Matched spoilers.)

Cassia walked away from the society's plans for her in order to search for Ky, who was taken to the Outer Provinces due to a decision she made. She goes to work camps and slaves away alongside Aberrations on her various assignments, hoping for any chance to find Ky. Ky himself is on a decoy farm in the Outer Provinces. He fights to stay alive though each march, air attack, and supply shortage so he can find a way to return to Cassia.

Ally Condie missed out on her sophomore slump with this novel. If anything, it was better than Matched. Cassia is no longer the indecisive, naive little girl that she was in the first book. She knows exactly what she wants, and she will stop at nothing to find the one she loves. The only hesitation she has is brought on by her memories with Xander. Ky loses some of his mystery (finally!) because having his point of view gives more insight into who he is as a character.

Although there was minimal action or major events in Crossed, the addition of more characters and secrets kept the story gripping and suspenseful. I was constantly wondering why each character wanted to find the Rising and if they were, perhaps, a Society agent. It is also revealed that Xander Carrow, Cassia's "match", has been holding some secrets of his own up his sleeve. I did not get nearly enough of him, but the next book in the trilogy, Reached, has been set up perfectly.

Overall, Crossed was a good book with rich characters, fascinating history of that future society, and enough mystery to keep me on board. I have become a much bigger fan of Ally Condie and cannot wait to find out how everything will play out in Reached.


Available Now! Amazon | Barnes & Noble | Book Depository | Fishpond
Be sure to add it to your TBR list on Goodreads!

*This is one of my reviews that have somehow slipped through the cracks and never got posted. Recently written reviews will still be done in the new style.