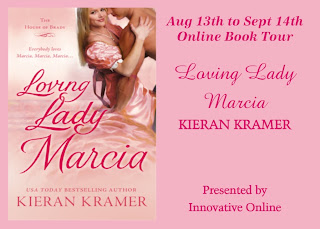 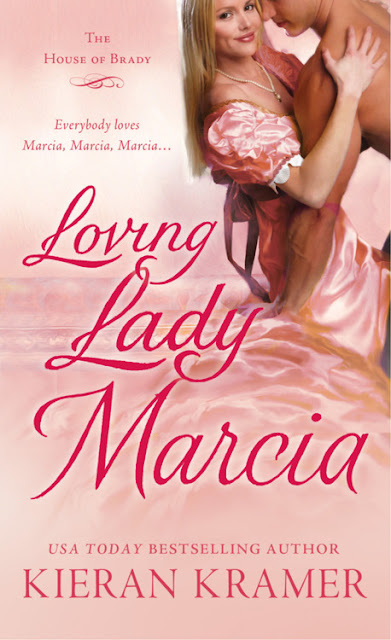 
Loving Lady Marcia is the first book in Kieran Kramer's new Regency series, The House of Brady. It is a light-hearted adult romance that is inspired by situations in the beloved American sitcom,The Brady Bunch. The main focus of the book is Lady Marcia Brady's romance first with Finnian Lattimore, and then later his brother, Duncan Lattimore, Earl of Chadwick.

The Writing of Loving Lady Marcia was typical for the adult Modern Regency novel, if you are familiar with those. It was a very fun read that follows the characters through the romantic and conservative standards of 19th century British society. Lady Marcia is the oldest daughter in the Brady household who we meet while she is traveling to a wedding in Ireland with Lord Chadwick (Duncan) and Mr. Lattimore (Finn). She turns sixteen on the journey and falls madly in love with Mr. Lattimore, who proceeds to break her heart. Kieran Kramer takes us on a delightful romp with Marcia through London five years later, following her dismissal as headmistress of her former school by the school's benefactress (and her rival), Lady Ennis.

The story is filled characters with characters that you will recognize from The Brady Bunch: the parents, Gregory, Janice, Peter, Robert, Cynthia, Alice the maid (briefly), and a nod to Tiger (the dog). They encompass everything that was fun about the sitcom, while playing true to the Regency standards in the novel. Gregory acts as a friend to Lord Chadwick and an excuse to visit the Brady household while he woos Marcia, and Janice is her sister's best friend, as well as becomes a target of the story's womanizer, Finn. However, the characters who stole the book for me were Joe, Lord Chadwick's son, and the Duke of Beauchamp. Their interactions was hilarious and provided a cute distraction from the romance developing on hand.

As for the romance and love triangle implied by the synopsis, I never felt drawn to Marcia and Finn as a couple. I enjoy a scoundrel as much as the next person, but it merely worked (for me) as an introduction to the romantic feelings between Marcia and Lord Chadwick. Though she has sworn off romance following her fling with Finn as a teenager, she did not take long to rush into the arms of the very attractive earl. It seemed that Duncan only wished to "clean up" Finn's messes, so to speak, but his true feelings for Lady Marcia were evident very early on in the novel. Most of the character and romance development did seem a bit manufactured at times (Finn was really the only one that stayed true to form throughout), but it was fun to read none-the-less. 4/5 Stars

The World-Weaving was a very fun part of the book. There were lots of glittering balls, card parties, outings, and secret trysts that occurred, and they were a beautiful setting for the novel. I really enjoyed the descriptions of the clothes and the frills of the peacocks of London society. Kramer always took special care to give a good visualization of each event, no matter how minor it may have seemed. The one thing I would have liked to see more of is some of the historical going-ons during that time period, but it did not really pertain much to the novel. (That's just the historian coming out in me.) 4/5 Stars

I am going to completely skip my Attention Span portion of the review, as I did read this as a part of a blog tour, but I will focus instead on the Pacing of the novel. One of the great things about these cute Regency romances is that they are fairly predictable. These romances are great fun to read when all you want to do is just sit back and enjoy a book with no heavy lifting. However, it can happen from time to time that the story will drag because everyone knows what is going to happen except for the characters. This was only the case a few times in Loving Lady Marcia, but I did find myself skimming once in a while because I wanted to get back to the romance at hand. (No, I was not smut-cruising!) The characters dancing their way through society can be great fun, but I tend to lose interest quickly if I get too many distractions from the events at hand. 3.5/5 Stars

The Extra Magic in the novel is going to make me seem like a hypocrite, considering my issue with the pacing. While some of the events in the novel had me skimming, the parts with Joe (as I stated before) were some of my favorites. The four year old did so well in bringing out the characters around him. Okay, I also enjoyed reading the sexy-times. There, I said it.4/5 Stars

Loving Lady Marcia is a sexy, funny book that is filled with beautiful settings and society that will surely be enjoyed by anyone who loves historical romance or Regency novels.

Other Retailers: Barnes & Noble | Book Depository | Fishpond
Be sure to also add it to your TBR pile on Goodreads! 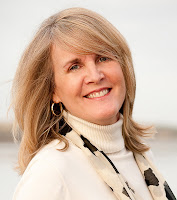 USA Today best-selling author and double-Rita finalist Kieran Kramer writes Regency historical romances for St. Martin's Press. If You Give a Girl a Viscount, the fourth and last book in her Impossible Bachelors series, is on sale now. Her new series, House of Brady, premiers in August 2012 with Loving Lady Marcia. A former CIA employee, journalist, and English teacher, Kieran's also a game show veteran, karaoke enthusiast, and general adventurer.

Kieran still has her giveaway going on for 40 super swag packs in conjunction with her fantastic blog tour, which will include:

a Rafflecopter giveaway
To satisfy FTC guidelines, I am disclosing that I received a free digital ARC of the book for reviewing purposes as a part of Innovative Online Book Tours in exchange for an honest review. All opinions expressed are honest, my own, and have not been influenced in any way.