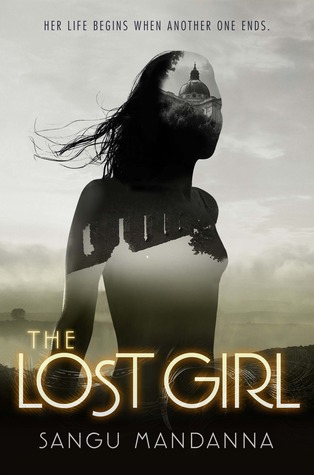 The Lost Girl is the debut novel of Sangu Mandanna. It is a young adult, speculative fiction novel that explores grief and the lengths that families are willing to go to never have to say goodbye. The main character is an "echo" named Eva who has been created for the sole purpose of stepping into her "other's", Amarra's, life if anything should happen to her.

Before I start hitting the main points that I look at when writing a review, I feel it is important for me to let you know that I experienced a loss in my family at the time I read the book and reviewed it (in addition to two other family deaths in the past two months). A major theme of this novel is grief and loss, so it had a profound affect on me as a reader. The manner in which Ms. Mandanna captured the feelings of each character was gut-wrenching.

I have said many times that there is little that I love more than a smart novel, and the Writing of The Lost Girl is very, very smart. It has a beautiful style that is all its own, while paying homage to classic stories such as Frankenstein by Mary Shelley - which was discussed in the novel itself - to Pinocchio. The similarities that it has to Frankenstein is that Eva is created by Weavers - "mad doctors", if you will - to replace Amarra in case she would die before her time. She is to be Amarra's perfect clone in every possible way, and for this she is considered to be a monster. Though legal in some parts of the world, she still has to be hidden away by her guardians from Hunters and the members of society who believe her to be an abomination. I saw so much of Pinocchio in The Lost Girl because all Eva truly wanted was to be a real girl and a person in her own right, and it was heartbreaking. One quote in the ARC (that I was idiotic enough to not write down the page number for) made me cry. Sean, the youngest guardian, told Eva at one point:


There's nothing wrong with being an echo. You step in when another dies. That's pretty glorious, don't you think? You're an angel among mortals. Echos are asked to sacrifice everything to make another family, other people, happy. To give them hope. You are hope.

Though Eva is the heroine of the novel, the supporting characters are just as rich and riveting as she is. Mina Ma is the woman who raised Eva in England and taught her everything she needed to know about India. Erik is her tutor who could be so much higher in the Loom than he is. She is tested regularly by Ophelia, the daughter of one of the Weavers, to make sure she is everything that she is supposed to be. Her final guardian is Sean, who is in charge of her socialization - and not much older than her. He is a completely amazing guy, and a romantic interest that I could even see myself falling for. 5/5 Stars

The World-Weaving in this book really worked for me. It's set in a near/alternate future, and I completely understood why that future existed. Death and loss is such a major part of life, and it is completely understandable why the Loom was allowed to "make" the echoes. We try so hard to hold onto what we love, and the story perfectly captured this. The Lost Girl gave us a reality where people could put off the necessity of letting go, and as a member of a very large, close family who has been faced with so much loss lately, it is a reality that I almost want. Fortunately, Sangu Mandanna also gave us Eva to remind us that there is always another side to the coin. The book felt so real and resonated so strongly with me, that I would almost believe you if you told me that the story was happening in our world right now. 5/5 Stars

The Pace of the novel will probably be a little slow to some readers, but it was perfect for me. I did not want this book to end. I wanted to stay with Eva and fantasize (guiltily, mind you) about the possibility of having echoes waiting to replace anyone I love and may lose. I even had time to be haunted about the fact that if I leave this world before my daughter is grown, there is no replacement to come into her life. No, I don't believe having an echo is necessarily right, but the pace gave me ample time to think much on what the possibilities could be if they did. 5/5 Stars

I don't think any books have kept my Attention Span the way The Lost Girl has. I still think about this book weeks after having read it. It is etched into my mind, and Eva is more than an echo for Amarra - she is an echo in my own mind for my own loss. 5/5 Stars

The Extra Magic of this novel is how it lingers. It was not easy for me to read this book while facing these very recent deaths (as I've said too many times already), but the book reminded me of fact that our time here is so precious. It made me remember that some things are not worth the chance, not worth the cost, and not worth the heartbreak, no matter how much it hurts. However, taking control of your life and living it the way you choose is always worth that. 5/5 Stars


Available Now: Amazon | Barnes & Noble | Book Depository | Fishpond
Be sure to add The Lost Girl to your TBR pile on Goodreads!

To satisfy FTC guidelines, I am disclosing that I received the book for reviewing purposes as a part of a DAC ARC Tour in exchange for an honest review. The book was provided to the tour by the publisher, which has had no effect on the outcome. All opinions expressed are rambling, honest, and completely my own.