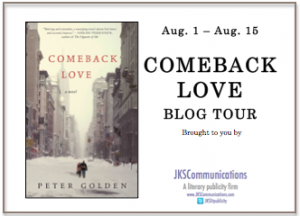 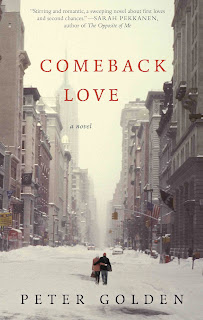 A debut novel about a man and his romantic quest to find the woman he loved and lost years before.

Like Nicholas Sparks and Robert James Waller, first-time novelist Peter Golden knows how to write the kind of nostalgic fiction that men and women alike fall for. In Comeback Love, a universal story about lost love, he offers an evocative debut that begins in the tumultuous 1960s and ends in the feverish thrill of present-day New York City.

Over thirty-five years ago, Gordon Meyers, an aspiring writer with a low number in the draft lottery, packed his belongings and reluctantly drove away, leaving Glenna Rising, the sexy, sharp-witted med student he couldn’t imagine living without.

Now, decades later, Gordon is a former globetrotting consultant with a grown son, an exwife, and an overwhelming desire to see Glenna again. Stunned when Gordon walks into her Manhattan office, Glenna agrees to accompany him for a drink. As the two head out into the snow-swept city, they become caught up in the passions that drew them together before tearing them apart. And as the evening unfolds, Gordon finally reveals the true reason for his return.

Comeback Love is a bracing journey into the hearts of two lovers who came of age in the 1960s. Plumbing the depths of youth, regret, and desire, Peter Golden deftly illuminates the bonds that mysteriously endure in the face of momentous change.


It is the hardest question to answer, and I hear it all the time: “Is Comeback Love true? Are you the narrator?”

I understand why I’m often asked this question: Comeback Love is the story of Gordon Meyers, a 50-something year-old man who tracks down Glenna Rising, the woman he loved and lost during the 1960s, when he was an aspiring writer and she was in medical school, and it shifts between the present and the past. It is a personal book about love and loss and becoming who you are, and it is narrated by Gordon, who sounds an awful lot like you-know-who.

Fortunately, I’m always ready with the perfect answer: “Yes! And no!”

This response does not usually draw cheers, but let me explain. I believe that novels are dreams translated into words, and dreams always belong to the dreamer. This means that I am as much a part of Gordon as I am of Glenna.

Again, this is less than satisfying to some, those who want to know if all the things in the novel happened. Absolutely, I reply. But not to me. Not even to anyone I know. But they must’ve happened somewhere to someone because I believed they happened when I wrote the novel.

Recently, I re-read Comeback Love. Of course, I saw a few things I might have done differently, but what struck me was that at moments I couldn’t tell myself apart from either Gordon or Glenna. But then that is the nature of true love, isn’t it? Walls keep coming down until your beloved’s heart is as dear to you as your own.

I’m lucky. That has happened to me. And it still happens—every day.


Buy Comeback Love Today! Amazon | Barnes & Noble | Book Depository
Be sure to add it to your TBR list on Goodreads! 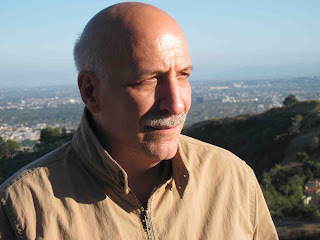 Peter Golden is an award-winning journalist and the author of six full-length works of non-fiction and fiction.

Golden’s Quiet Diplomat, a biography of industrialist and political-insider Max M. Fisher made the Detroit Free Press bestseller list. Among those he interviewed were Presidents Nixon, Ford, Reagan and Bush; Secretaries of State Kissinger, Haig and Shultz; and Israeli Prime Ministers Shamir, Peres and Rabin.

With J. Stanley Shaw, Golden wrote I Rest My Case: My Long Journey from the Castle on the Hill to Home, a memoir that chronicles Shaw’s life from his childhood years under the supervision of the Brooklyn Hebrew Orphan Asylum in the 1930s to his career as one of the preeminent bankruptcy attorneys in the United States.

His debut novel Comeback Love (Atria Books, April 2012) tells the story of a man and his romantic quest to find the women he loved and lost years before in the 1960s.

Golden grew up in South Orange and Maplewood, New Jersey, and lives today outside Albany, New York with his wife and son.