Blog Tour (Excerpt): My Journey as a Combat Medic by Patrick Thibeault 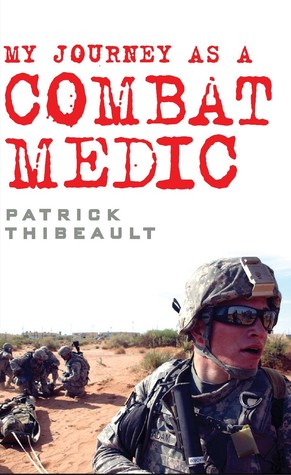 My Journey as a Combat Medic is a no-holds-barred look at the modern medic in the US Army, allowing us a glimpse at the training as a soldier and as a specialist, as well as deployment and front line duties and the impact of service on civilian life, including an honest look at PTSD, from the author’s own personal experience. Rather than a technical manual, My Journey as a Combat Medic is a detailed firsthand account, concluding with a letter to new medics, providing a career’s worth of advice and knowledge as they begin their journeys. This book is about the soldiers who bring compassion and humanity to the battlefield.

The Ranger Battalion Chief Medical Officer was a hardcore physician assistant. He had been a Special Forces medic before he went to school to become a physician assistant. He deployed on several combat operations throughout his career. The training was physically intense, and as predicted I was getting into pretty decent shape. It was an honor to be in the presence of these Rangers. Many of the medics from the Ranger Battalion had parachuted in Panama back in December, 1989. I was still wet behind the ears compared to these medics, but none of the medics gloated about having a combat jump or about having the Combat Medical Badge. (The Combat Medical Badge is awarded to combat medics during war who do their job while being engaged or engaging the enemy.) They had to go through Expert Field Medical Badge just as I was doing.

We did physical training every morning in order to start the day with a fresh mind and a fresh body. I remember this tall Ranger medic specialist who was a hard-ass, but he also cared about our training. He ran next to me and he played, or at least he tried to play, mind games with me during the run. I was not a fast runner. As we headed toward the finish line with about a mile left to go, he told me and another slower runner that if he beat us back to the line, he was going to smoke us hard afterwards. The slower runner let the challenge go to his head, and he slowed down even further. I, on the other hand, started to sprint, but no matter how hard I tried, with all of my intestinal fortitude, I could not catch up with this fast-running medic. It was beyond my physical endurance. I finished the last mile about 30 seconds behind him, and after I crossed the line, I proceeded to vomit my brains out for a few minutes. After catching my breath, I was ready to take the smoking I was warned about. The medic knew that we were not going to beat him in the race, but he wanted to see what we were made of. The other soldier had stopped and he was half walking and jogging. I gave it my all, but I was never going to be that much of a runner. I always like a challenge and I was sure as hell not going to wimp out because my chest was burning from running so hard. The Ranger medic patted me on the back as I was doing my push-ups and told me I did well because I didn’t quit, even though I didn’t have a chance in hell of beating him. I learned a valuable lesson that morning during the run − a lesson more about life than some badge: never quit, always give what you do 100 percent, because even if you fail, if you tried your hardest, then there was nothing else you could do.

I remember the muscle pain and cramping in my legs after that run, and it felt good. The medical training I received from the EFMB was both by the book and from the experiences of the sergeants and the physician assistant. We reviewed how to apply a field dressing, pressure dressing, and a tourniquet, all of which was in the accordance with the standards of the course. The real learning took place when these combat-hardened medics showed us tricks that were not in the regulations, such as using a cravat and an unopened field dressing as an indirect pressure dressing. This indirect pressure dressing could be applied to the upper and lower extremities to slow down the flow of blood to the limbs. The physician assistant reviewed how to insert chest tubes in the field. One medic asked him about pain medication before doing this, and he responded in a typical Special Forces fashion, “They either live with the pain or they die.” The physician assistant was a no-nonsense leader. He gave us quick pop quizzes over the fresh material. An incorrect answer meant we had to get into the front-leaning rest position and start doing push-ups until we remembered the answer. After about 50 push-ups, it was amazing how we got those correct answers.

He gave us a lecture about pain, blood, and deformity. Typically Ranger units do assaults under the cover of night with stealth and surprise, so the Ranger medics do not have the luxury of sunlight to assist them in the stabilization of the wounded. The best things to look for in the wounded are pain, blood, and deformity. If a wounded soldier is not breathing on the battlefield, it is already too late for him or her; on the other hand, if you rub your hands against their chest and they moan, that means they are alive. Pain can also be an indicator of where a wound is located; it hurts when someone touches you where you have a cut. The presence of blood means there is a wound nearby. The medic must use his or her sense of smell and sense of touch to find blood. Fresh blood has a distinct metallic smell to it and it is still warm when it comes out of the body; the medic will feel that warmth. Soldiers can be saved on the battlefield if the bleeding can be controlled. At the same time that he or she is checking for pain and blood, the medic needs to check for deformity. This could be a hole in the chest, or an extremity that is out of regular contortion. The medic feels for these deformities by quickly pressing the wounded body. Some deformity is obvious such as a femur fracture; other forms of deformity can be gradual at first such as an abdominal cavity slowly filling with blood.

Patrick Thibeault grew up as an Army brat. He lived in the United States, Germany and graduated from high school in Seoul, South Korea.

He joined the U.S. Army to become a paratrooper medic. He was assigned to 3rd Battalion/160th Special Operations Aviation Regiment (Airborne). Patrick deployed to Operation Desert Storm and Shield back in 1990.

During his time in the 160th, Patrick had the chance to grow as a medic, a soldier and as a man. He deployed to locations both in the United States and many different overseas locations.

During his time in the National Guard, Patrick deployed to Operation Enduring Freedom and non-combat operations in South America.

You can also follow the rest of My Journey as a Combat Medic's blog tour by checking out the schedule HERE.