Blog Tour (Interview): The Ripple in Space-Time by S.F. Chapman 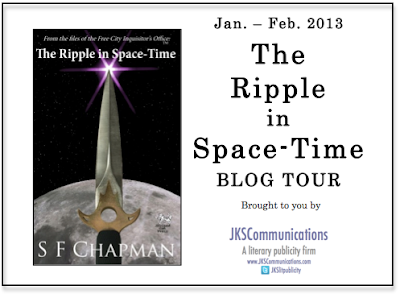 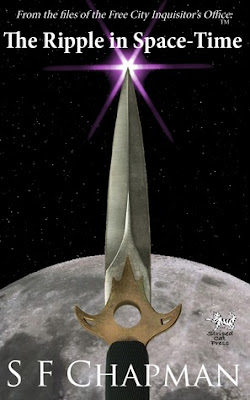 When the huge lunar Ultra Energy Laboratory is destroyed by a mysterious blast, Inspector Ryo Trop of the Free City Inquisitor's Office is called in to sort out who is responsible for the disaster.

Early reports imply that rogue moon miners are to blame but Ryo quickly discovers that a far more complex and sinister scheme is afoot.

With the help of a promising young Liaison Agent and a faltering Grad student, Ryo searches for clues and culprits in the corrupt and moldering feudal fiefdoms of the Warlords that dominate human affairs in 2445.

Ryo’s longtime friend, Biology Professor turned spy Malcolm Evans, suggests that the wave of space piracy that has recently vexed the Solar System could be connected to the obliteration of the lunar lab.

But why would reckless and marauding space raiders have an interest in a research facility?

Mr. Chapman, thank you so much allowing me to interview you for Bibliophilia, Please! If you would be so kind, could you please tell us a little about The Ripple in Space-Time in your own words?

Thank you for taking the time to interview me.

The Ripple in Space-Time is set in 2445, which is several centuries after a colossal world war has greatly diminished humanity. Much of the Earth is uninhabitable, and a few brave souls have spread out across the Solar System.

With the exception of an enlightened autonomous zone called Free City, nearly everything is controlled by a few corrupt Warlords.

At the beginning of the story, a lunar research lab is destroyed by a mysterious blast. Detective Ryo Trop from the Free City Inquisitor's office is called in to figure out what happened.

He quickly discovers that a complex plot to steal valuable antimatter is afoot. The story races across the Solar System from there.

What do you believe makes The Ripple in Space-Time stand apart from other science fiction novels?

I have been fascinated lately with what it must have been like just before the Renaissance. Europeans were slowly rediscovering the knowledge of the ancients and casting off the shackles of the Middle Ages. I wrote The Ripple in Space-Time as a future version of that sort of a rebirth of enlightenment.

What was your favorite or most surprising “Aha!” moment while writing The Ripple in Space-Time?

Some amount of The Ripple in Space-Time takes place in East Africa, which I visited in 1991. With all of the death and destruction that happens throughout the book, I wanted to end on a hopeful note. The final chapter is a metaphorical scene with an old Maasai hunter as he contemplates the natural world around him.

I wrote the chapter in about an hour, and I was really amazed by the results.

Which character was your favorite to write? Did you have any characters that made a larger role for themselves than what you originally intended?

I needed a servant for one of the Warlords, and I created an eleven-year-old slave girl named Dilma to cower nervously as she interacted with him. Dilma was originally going to appear in just a few paragraphs but I ended up falling in love with her. I felt that I couldn’t abandon her to a dreadful life of slavery. She became a significant character in The Ripple in Space-Time and has found her way into several of my other novels.

Do you have any interesting writing quirks?

I think that all writers have their quirks. I know several authors who will only sign books with a certain “lucky” pen.

I nearly always write in the wee hours of the morning. I rarely sit at a desk, usually I prop myself up on my over-stuffed blue sofa with my laptop. I have a big old house cat named “Lucky” who sits with me while I write. I don’t think that I could do it without his soft purring and occasional quizzical looks.

Are there any science fiction novels or authors that you would say were especially inspirational to you as a writer and in life?

I’m a science fiction traditionalist and I love the old stuff from the 1950s and 60s. I especially like Arthur C. Clark, Larry Niven, Jerry Pournelle, Joanna Russ, Isaac Asimov and Ray Bradbury.

I think that George R. Stewart’s Earth Abides has greatly influenced me. It takes place in the San Francisco Bay Area where I live. I sometimes imagine that I could be “Ish”, the often-dispassionate main character in the book, as he watches over the end of modern civilization and the birth of a new primitive society.

Earth Abides was the first adult novel that I read to my kids as a bedtime story when they were little. They both loved it.

I have a big stack of books awaiting my attention right now. In the scurry to publish The Ripple in Space-Time, I haven’t had a spare minute to read. In a month or so things should settle down.

The top three books in the stack of novels where given to me by author friends and I’m especially eager to read them. They are The Sausage Maker’s Daughters by AGS Johnson, Who’s Your Daddy, Baby by Lisa Pell, and Tide Breaker by Sonya Watson.

I have a great many books nearly ready to publish in the next few years.

My next novel, On the Back of the Beast, is about a natural disaster in the San Francisco Bay Area and how it affects several people. I am currently writing a Literary Fiction account about homelessness called The Missive in the Margins, and I’m editing a sequel to The Ripple in Space-Time entitled Torn From On High. 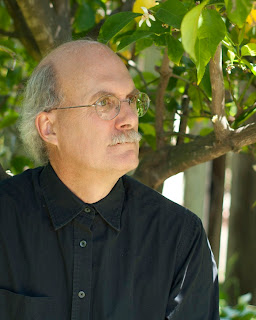 S.F. Chapman has done it all. He spent 4 years as a truck driver, 8 years as a scientific glass blower and 20 years as a building contractor. He’s a computer geek, handyman, music lover and relentless tinkerer.

But he is most excited about his latest endeavor. In the next five years, Chapman plans to release 12 books. His first, I’m Here to Help, launched on July 1, 2012. His next release is the science fiction detective tale The Ripple in Space-Time due out on February 1, 2013.

Born in Berkeley, Chapman is a California boy for life. He grew up on the Pacific coast and has spent the last 54 years in the San Francisco Bay Area.

He’s the third of twelve children, born to an endearing stay-at-home mother and traveling salesman father during the 1960s Space Race.

While working on his liberal arts degree at Diablo Valley College, Chapman chose mostly classes in the English Department, focusing on science fiction literature, composition and short story writing. He generated nearly a dozen short stories in two years and considers that period to be the beginning of his writing career.

S.F.'s six works so far are the post-apocalyptic soft science fiction MAC Series consisting of Floyd 5.136, Xea in the Library and Beyond the Habitable Limit; the science fiction detective story entitled The Ripple in Space-Time, the literary novella I’m Here to Help, and the general fiction tale of death and destruction called On the Back of the Beast. He is currently alternating between two entirely different writing projects; the first is a rough and tumble literary novel about homelessness called The Missive In The Margins and the second is a science fiction detective squeal to The Ripple in Space-Time dubbed Torn From On High.

He is the proud papa of a 19-year-old son and 16-year-old daughter.

S.F.'s huge gray male tabby cat keeps him company while he writes and was the inspiration for Striped Cat Press.