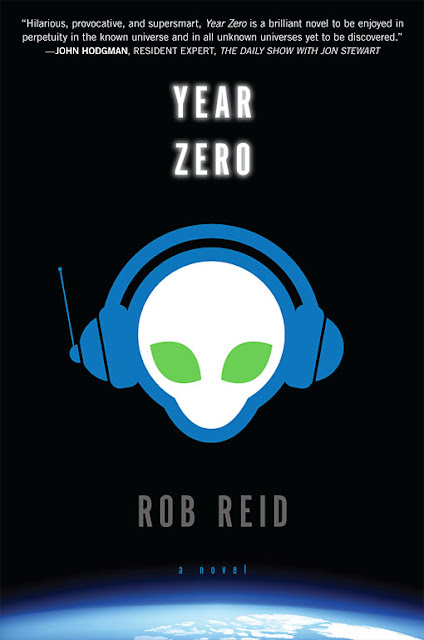 An alien advance party was suddenly nosing around my planet.
Worse, they were lawyering up. . . .

In the hilarious tradition of The Hitchhiker’s Guide to the Galaxy, Rob Reid takes you on a headlong journey through the outer reaches of the universe—and the inner workings of our absurdly dysfunctional music industry.

Low-level entertainment lawyer Nick Carter thinks it’s a prank, not an alien encounter, when a redheaded mullah and a curvaceous nun show up at his office. But Frampton and Carly are highly advanced (if bumbling) extraterrestrials. And boy, do they have news.

The entire cosmos, they tell him, has been hopelessly hooked on humanity’s music ever since “Year Zero” (1977 to us), when American pop songs first reached alien ears. This addiction has driven a vast intergalactic society to commit the biggest copyright violation since the Big Bang. The resulting fines and penalties have bankrupted the whole universe. We humans suddenly own everything—and the aliens are not amused.

Nick Carter has just been tapped to clean up this mess before things get ugly, and he’s an unlikely galaxy-hopping hero: He’s scared of heights. He’s also about to be fired. And he happens to have the same name as a Backstreet Boy. But he does know a thing or two about copyright law. And he’s packing a couple of other pencil-pushing superpowers that could come in handy.

Soon he’s on the run from a sinister parrot and a highly combustible vacuum cleaner. With Carly and Frampton as his guides, Nick now has forty-eight hours to save humanity, while hopefully wowing the hot girl who lives down the hall from him.

“Hilarious, provocative, and supersmart, Year Zero is a brilliant novel to be enjoyed in perpetuity in the known universe and in all unknown universes yet to be discovered.”—John Hodgman, resident expert, The Daily Show with Jon Stewart

It’s been a week since I finished reading this book, and I still don’t know what I’m going to write in this review. And since time continues to go by, the relentless bastard, I decided to stop trying to think and just go forth and review. So, here we go!

The premise of the book is interesting, and it’s what got me to read it in the first place. We follow Nick Carter, not the Backstreet Boy but an attorney at a copyright law firm. He is one day approached by a busty nun and a weird rabbi. Things get weird quickly in this book. Then they get absurd. Then weird again. All good things as far as I’m concerned.

I liked the characters. All of them. 'Specially Nick “Not the Backstreet Boy” Carter. He was admirably normal, considering the maelstrom of weirdness that exploded around him when two aliens come to him and tell him the Universe, capital U, has been pirating Earth’s music for decades and now, according to Earth’s laws, they owe so much money in royalty fines that Earth now owns the accumulated wealth of the Universe, capital U.

I liked the plot. How rare is it to read an alien-law-music-piracy-strange story and find it interesting and appealing? Very rare. Most law based books are dramas and dreary and meh.

And still. After all that I liked the characters (except Carly and Frampton, too stupid at some points for me to like them like them), the story, the plot, the dialog, the twists, the weirdness, still, after all that - it didn’t grab me. It didn’t make me WANT to read it. It’s not by ALL means a bad book. It just wasn’t the book for me.

It may be that I was distracted by work. Or that I wanted to read the book I was going to read after this one so bad I just wasn’t able to focus on this one. Or maybe something else. The thing is that I didn’t quite enjoy the book, however much I liked all aspects of it separately.

Very rarely does this happen to me. I usually LOVE A BOOK, OMG GO READ IT NOW OMGOMGOMG. Or I dislike it and stop reading it, drop my kindle (carefully onto a soft plushy surface, I’m not stupid) and go wash my eyes and hands of the awfulness. But this lack of interest makes this book something rare for me. A book I liked in my head, but didn’t grab my emotional fanboy strings.

I will read the second book. Mostly because I’m intrigued by the story and what’s coming. But I don’t know. Mixed feelings.

Anyways. Weird review, eh? Just because I didn’t quite like it doesn’t mean you wouldn’t. And I would recommend it if you liked The Hitchhiker’s Guide To The Galaxy, as it does have a taste of it. So go forth and experience for yourself what this book is like. If nothing else the ending will make you go WHAAAAAAAAAAAAT?!?!? I forgot to mention that! The ending. Holy crap I didn’t see that coming. Strike all that I said before. Read it, if only for the ending. I feel stupid now. The ending makes up for all the rest. Crap. Now I have to re-write this review.